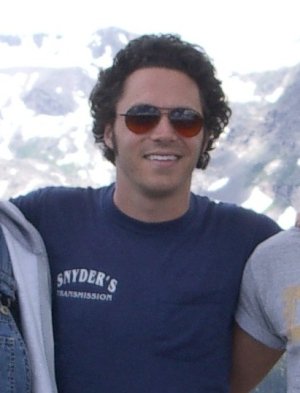 I have to say, it's been a long road that's led me here to RARB. For five years up at Dartmouth College, I sang proudly as a member of the Aires, for whom I also arranged an awful lot of songs, served as director from 1999-2000, and produced/assistant-produced three albums — you can check out RARB reviews for two of them here and here. In fact, my experience with the Aires proved so comprehensive that I decided to major in music, with a focus on theory and composition. I also held my own in the dorky but passionate realms of student-produced musical theater, and managed to crank out quite a few original compositions that, if not ultra-accomplished, provided a welcome break from the relatively small palette of "bairs" and "bings" from which I crafted many an Aires' tune.

Since leaving Dartmouth, my life's been all about the job (I work at the Stanford Law Library), and it's been increasingly difficult to find musical outlets that fit into my schedule. So, I'm particularly grateful for and excited about this opportunity to get back into the aca-mix. I enjoy the work I do in libraries; it's taught me a great deal about order and process. Most importantly, though, I've learned unequivocally that I cull a deeper satisfaction from dealing with the systems of tonality and voice leading and syllable choosing and so on, than I do from those of Dewey's Decimals. Deep down I've always been a huge a cappella nerd, so I'll consider this my official outing.

Now, some fun facts about Adam (impress your friends at parties!):

* Marriages may not have been legally binding and were definitely not consecrated by drinking a bottle of Hot Damn.