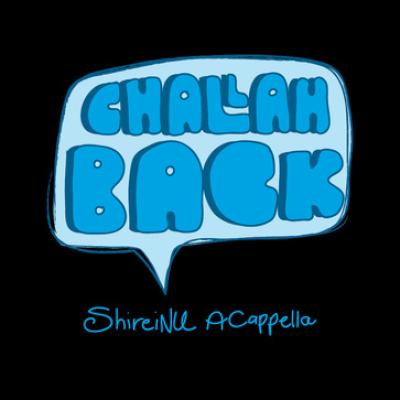 ShireiNU is a coed Jewish a cappella group at Northwestern that was founded in the early 2000s but broke up when its founding members graduated. The group was revived by a new set of students in 2009, who used Indiegogo to fund the recording of its debut album Challah Back.

It is impressive for a group to start basically from scratch, hold auditions, build up a repertoire, record, and produce physical CDs — all in less than four years' time — and ShireiNU is certainly to be commended for its perseverance and dedication to this task. Unfortunately for listeners, the album sounds like a recording from the early 1990s, without any of the polish and precision that modern a cappella fans are used to.

Challah Back sounds like it was recorded live in a big room with the entire group standing in an arc in front of a few area mics. The group is almost swallowed up by the openness of the room, and there are tuning and tempo problems throughout. On the opening track, percussion sounds like "boots 'n' cats", and the soloist is difficult to hear and understand (it sounds like she's singing "faster than my brother", when the lyrics are actually "faster than my bullet"). And that's one of the more listenable tracks here. Gravity is too forcefully sung, both by the soloist and by the backing voices: the song's subtlety and tenderness is drowned out by the group's pounding of each syllable. This is a song that requires dynamics and phrasing, neither of which is accomplished here with the group over-enunciating every. single. syllable. The harmonies, blend, and timing on Sound of Silence are really shaky, and again, the group doesn't make any use of dynamics or tension here; the group's unison phrases/verses should be haunting and eerie, but they're oversung and jarring. There's not one but three percussionists credited on Kids, and the result is chaotic and distracting; the bridge of the song sounds like they're each making as much frenzied noise as possible, with no sense of rhythm.

There are a few moments on Challah Back that are okay: Secrets has an interesting arrangement, courtesy of its soloist Stephanie Feigenbaum, who shows some interesting nuance and dynamics (!) in her delivery here. The recording still sounds like it is a live concert in a gigantic auditorium, but it's one of the few songs that moves consistently, with the backing voices adding to the song without detracting from it. The two Hebrew songs here, Yo Ya and Erev Shel Shoshanim, each fall into this category as well: these arrangements and performances are heartfelt, even though the recording quality isn't great.

Challah Back is the textbook definition of a yearbook album. My advice for ShireiNU's next recording would be to enlist the talents of folks well-versed in recording, mixing, and mastering a cappella albums (it looks like the studio that ShireiNU used, Studiomedia Recording Company, records all kinds of music, not just vocal music), and to make the next recording sound like a true studio album, not a muffled live recording.

Sixteen years ago, my college a cappella group went to record its third album. The setting was an auditorium in Lake Placid, where we all stood on stage in a semi-circle, segregated into sections with a single cardioid microphone in front of each cluster of three or four. No more than a few feet (and a small, woefully insufficient acoustic panel) separated each section. In nine hours, we recorded fifteen songs that way, taking an hour for a McDonald's break sometime in the middle.

Guess how that album sounded? The answer, of course, is "not very good."

Challah Back, the debut album by Northwestern University's ShireiNU, sounds a little better than that old album, but not by much.

Listen, I know how hard it is to to get a debut album made. A relatively new college group like ShireiNU, formed in 2009, typically has little or no financial resources and certainly not the $8,000-$10,000 (or more) it can cost to make a quality album. I know this, and yet ... significant advances in recorded a cappella music in the past five years have raised the bar for everyone. What would have been a middling, intermittently out-of-tune album with limited atmospheric (reverb) and stylistic choices ten years ago now sounds hopelessly outdated.

Gravity, a song which can be covered in an almost choral style as ShireiNU chose to do here, can benefit from an uncorrected and straight sound and hall reverb. Erev Shel Shoshanim, a Hebrew love song, certainly makes effective use of this style as well. They are, however, the only two tracks on this album which don't sound blatantly, awkwardly out of touch.

As with many groups, ShireNU has generated a "yearbook album" to showcase its repertoire and maybe generate a little revenue to hopefully put towards future projects. Challah Back may hold some personal value for a new group trying to find its bearings and identity. Sadly, it offers little value to listeners outside of the group's families and friends. The songs sag under the weight of tentative and uninspired singing, washed in a cold, unnecessarily large hall sound. Arrangements are generally simple and uninteresting. I am always reluctant to write a stream of negative, albeit truthful comments, but sometimes honesty, like sunlight, is the best disinfectant.

For this reason, I am hopeful that ShireiNU can learn from its experiences recording and producing this album, from the feedback collected, and perhaps from what much of the collegiate a cappella community (including a few outstanding groups on its own campus) is already doing with recorded a cappella music. I hope that such awareness and education will help these singers to enhance the meaning and quality of their arrangements and enhance their efforts when they go back into a studio, leading them to take a big step forward.

Challah Back is the debut album of ShireiNU from Northwestern University. Initially, the album wins points for the title alone. Based on the album artwork and pictures, I get a sense that this group has developed a close bond as both musicians and friends, and their label of being a Jewish a cappella group adds even more purpose to their singing. Advertising as a Jewish a cappella group, however, does create expectations and questions about the work one is going to be exposed to. How much Hebrew music will be incorporated? Will the music be a fusion of various elements? Is diction going to be spot on? What are we accomplishing with this album?

After all is said and done, too many questions go unanswered for me to really know what direction ShireiNU is headed.

For starters, production work in this album is too shaky. As each track starts, the listener knows that the music is not going to be over-produced with an abundance of vocal effects or gimmicks that cannot be replicated in a live show. With this in mind though, Challah Back sounds like an album that is way behind its time. There are even moments when I feel as if non-musical elements are sticking out in tracks, such as ambient sounds in the opening of Kids or other undeterminable sounds at the close of multiple tracks.

Ultimately, blend and tuning are the biggest factors that keep this album from really progressing. Yo Ya starts off with little cohesion and overall seems rushed. This track could be improved with a slower tempo and more balancing of voices. Gravity is also another track with tuning issues. I feel that the non-percussive tracks were more in the group's element, but simple things such as tuning in the backing groups' "ooh"s really hold back the sound on this track and others.

It seems that the group enjoys more American contemporary tunes, yet I would have enjoyed a few more Hebrew selections. Erev Shel Shoshanim is easily the best track on the album simply because it portrays emotion, has fewer blend issues, and it sounds like something the group is naturally used to singing. I think that this is the biggest obstacle and hinderance for groups: selecting songs that naturally fit within the group's ability. I in no way think Challah Back should be flooded with Jewish-centered songs, but I feel as if more of these elements could have taken this album further.

ShireiNU still has a ways to go before it makes a vocal splash in the a cappella community. The group has only been around since 2009, and it seems as if the singers are still trying to find their sound. I do not feel as if Challah Back completely portrays what the group may be capable of. With stronger arranging, more careful production, and more focus on a tighter group sound, things may start to look up for this group's studio presence.

Order a physical copy for just $5 at Singing Jews.