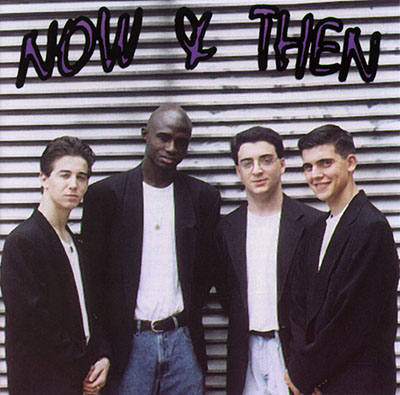 Now & Then is a fairly well-mastered album sung by some talented but young singers; this results in an album which is very good for what they're doing, but not fantastic on an absolute scale. Although the guys clearly enjoy their singing, and show some inspired moments, there are recurrent problems which keep this disc out of the professional category.

Pitch routinely falters, especially during key changes (which is expected) and tags (which is annoying). This problem is compounded by a bass whose low notes are mostly glottal fry, and whose tone is generally too light for my liking. In a group of only four, each part should be substantially its own; the bass' tone is simply too light, and his vowels rarely match the others'. His lead-in on Donna is a disaster.

The arrangements are effective for the four voices; I could stand to hear some more involved instrumentation, including more mimicry of instruments and less straight "ooh" backing vocals. Less bass recitative would also be more professional: guys, the audience loves it because it's funny when groups do lame things.

The group does doo-wop, and they do it fairly well. In this sense they are behind the times. Also strange is the fact that the album is dated five years ago (1995). Does this group still exist? Are they singing differently now? Are all of these comments utterly spurious? In any case, take the album for what it's worth (a decent high school doo-wop album), but don't take it unless someone offers it to you for free.

Starlight Serenade presents Now & Then...which is really a whole lot more then and not quite as much now. Nevertheless, this quartet comprised of alumna from New Rochelle High School graces our CD players with this rather lengthy collection of covers with a couple of originals thrown in for good measure.

My initial impressions as the CD warmed up? The first three tracks were not pretty to listen to: especially problematic were held notes that couldn't stay at one pitch and some rather rough blending throughout the three. I don't know if it was a lack of time in the studio or lack of use of the production facilities, but the first three tracks really needed some smoothing, and left me wondering how I would survive the next eighteen...

HOWEVER, then a trio of '60s classics came along that really brightened things up, with exquisite arrangement, blend, and tonality. Very simple yet full arrangements washed over the tracks and I felt very happy that the first three tracks were just mistakenly placed up front...

HOWEVER, we sank yet again with Girl I Love You So...mostly back to the blend problems, as well as a difficulty of coming out of dynamic changes without some imbalance in the blend yet again.

Much like a ship across the ocean, the recording listed one way, then righted itself, then listed the other way. I get the sense from the liner notes that the group is quite good in live performances; it's just a shame that that standard couldn't shine through on the recording. When the tracks were slower and/or had many dynamic changes, the blend seemed to lean towards four voices...when the tracks were more familiar and a bit more uptempo, the blend was as one group.

Overall, I can't recommend this as an immediate buy. For me, it's not the first CD I'll pull out of my collection to play, though I may make copies of the second trilogy for a mix tape.

Although there's something nostalgic and sentimental about teenagers singing the songs that their parents (grandparents?!?!?!) would have heard on the radio, Now & Then's commendable enthusiasm don't do the oldies (but goodies!) any justice. Starlight Serenade must have too much money on their hands if they're just roaming the country giving out money to record a cappella albums....hey you! Over here! I want to record an album too!

To give Now & Then some credit, I'm very impressed that Michael Piedmont has written and arranged quite a bit of the music on this 21-song disc. It takes a lot of guts and creativity to write your own songs and present them to the world. Congrats! I encourage you to continue honing your craft.

That said, we've always been told here at RARB that we should review albums based on their own merit and held against the general catalog of a cappella albums. So saying that this album is "pretty good" considering the four gentlemen are high schoolers just won't cut it. There are problems with pitch, synch, breath control, and plain old musicality throughout the album. It's not that they can't sing, or that they are not musical per say. It's just that they lack the vocal maturity and control of more seasoned singers resulting in shaky leads and thin background vocals. They have yet to develop the ability to slide from one note to another smoothly, so the result is a very straight and choppy sound, and they don't appear to have developed a clean vibrato that would then flesh out their doo-wop sound. Sadly enough, I find myself cringing at most chords held longer than a second. They do okay when singing on piecemeal parts, where each voice is singing it's own rhythm and "melody", but once Now & Then attempts to lock a chord, well, let's put it this way: my puppy wouldn't stop barking.

That's not to say that there's nothing good about this album — some of the original tunes have really catchy melodies. (Give Our Love Just One More Chance comes to mind.) They clearly enjoy what they do, and that energy is palpable. But Now & Then still have a long way to go before they grow into the potential that their enthusiasm and song writing skills hint at here. With practice, hard work, and maybe even some vocal coaching, these guys could some day produce an album that we'll all enjoy listening to.

Now & Then were in high school when they recorded this album (in 1995). From my quick calculations, they should be out of college by now and probably have a love-hate relationship with this album. I'm pretty sure they listen to it once a year or so, feel a little nostalgic for the good-old high school days, and then put it back on the shelf until next year. In this, I'm not saying it's a bad album, but actually a decent album from a high school doo-wop group.

The recording suffers from all of the usual high school a cappella problems: weak intonation, slightly erratic tempos, and sometimes just a lack of energy. There are some very nice doo-wop-y originals, especially for a high school group. The covers are the usual grouping of doo-wop hits: Happy Days (not the strongest opener by the way), Silhouettes, Why Do Fools Fall in Love. There are also a couple of other high school group standards (my HS group did the same): The Longest Time, Sixty Minute Man, Amazing Grace.

So overall, not a bad album. Not a great album. A decent album from a decent high school group doo-wop group, although I'm not sure I would recommend any die-hard a cappella-heads contact Starlight Serenade and try to purchase a copy.

Gotta be honest. I approach doo-wop much the same way I approach alcohol and small children — in moderation. For me to actually enjoy them, the scotch had better be really good, or the kids had better be very well-behaved.

That said, check out the back cover of Now & Then's debut CD and here's what you'll find — 21 songs. Nope, not a typo, it's 21 songs! And it's their debut CD! The song selections basically fall into two basic categories: standard doo-wop classics, and original songs by group member Michael Piedmont, with one or two tunes that venture outside the mold.

So before we get started, I plead with you — Now & Then and any other young, eager, motivated groups out there. The old adage about quality vs. quantity is true. On a cappella albums, size doesn't matter. Pick your best songs. Sing what you know, sing it really well, and use the rest of your repertoire to fill out a live concert.

Okay, okay, maybe I'm being a bit harsh. After all, Now & Then was formed back in 1995 when four high schoolers from New Rochelle, NY turned their friendship and talent into a vocal ensemble. This was their 1st album and the rough edges can be expected to show. The tuning, especially in the middle 2nd tenor/high baritone voicings, and occasionally on the extreme high end, is shaky. The pitch drifts in several songs which end slightly lower than they started. Subtle accelerations seem to consistently creep into the faster-paced songs. And the arrangements overall are nothing more than standard, or even too simplistic at times.

Mind you, none of this is overly egregious — if you like doo-wop, you might enjoy listening to this CD once or twice. Especially if you get a kick out of the fact that the performers are so young, with most of their material written long before their births (and mine!). The stalwarts are there: Breakin' Up Is Hard To Do, Silhouettes, Duke of Earl, Why Do Fools Fall in Love, In the Still of the Night, Goodnight Sweetheart et al, all performed adequately, but without the requisite polish and feel that would elevate them from "pleasant" to "exciting". Among the other songs, the originals (all by Piedmont) are a noble effort but there's a reason classics are classics and these fall far short (especially in the bland lyrics and forced rhymes). As for The Beatles' Yesterday and Lionel Richie's Hello, I'm still wondering why they ended up on this album — not horrific, just grossly out of place.

All in all, a good first try. If you're a doo-wop fan, maybe you'll borrow it from a friend before you decide to buy. And hey, scotches (and little kids) get better with age.