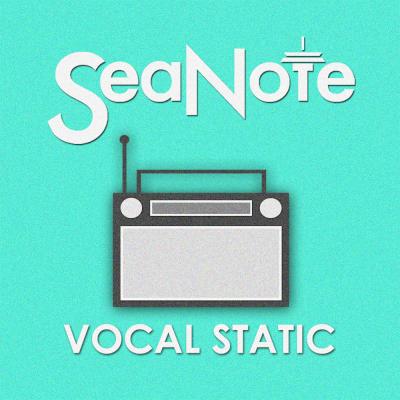 Sometimes the numbers just don't add up. By most accounts the mixed quintet SeaNote out of Seattle has made an average debut recording. The fundamentals are there. Musically the group has a nice overall sound. The arrangements are easily accessible. The voices are really pretty. It has that distinctively laid-back Pacific Northwest vibe about it. And there is definite engagement with the songs they've recorded. Vocal Static is solid, and well grounded, but nothing for the group or its audience to get truly excited about — except for that euphoric feeling of "Hey guys (and gals) we made an album!" which never gets old no matter how many times you achieve that feat. So even though the components are good, the overall output nails that "3" bullseye.

SeaNote commits the "sin" of opening its recording with that radio station trope that's been a collegiate favorite for nearly two decades. I cringed upon first listen, expecting to give SeaNote Radio a "1", but then noticed a tiny piece of brilliance: none of the tracks in the medley are on the album. So it truly became a mini-demo of what else the group can do. And the production on the opener is particularly kitschy and fun.

Unfortunately, that energy doesn't carry over to the rest of the album. Everything after it gets a bit hazy. If you have read any of author Rick Riordan's young adult series about Percy Jackson, it's like SeaNote is a bunch of demigods shrouded in the Mist. So whatever epic music battles they are waging, we mere mortals see a bunch of fluffy bunnies hopping through a meadow. Nice, but not the grit or innovation that the audience wants or expects to hear on tracks like I Knew You Were Trouble and Happy. Even the additional raps throughout are too reminiscent of Urban Method, so their inclusion detracts from that creative "oompf". Dark Blue Horse tries to pull out some of the stops, but even after the middle breakdown it never ratchets up the energy that makes me want to get out of my chair and dance. That's death for an upbeat dance track.

SeaNote does show a spark of what this group could grow into if it continues to evelove past its collegiate roots. For some reason, their rendition of Scarborough Fair is mesmerizing. From Shaheer Aftab's wind-swept background vocal percussion to the glorious choral opening by Michael Kibbe and Isaiah Lin, I am hooked. Then Amanda Tran adds her smoky and beautiful contralto on the third verse, and Lucy Liu's heavenly soprano, and they have me dead in the water. This is some perfectly imperfect music. It's definitely not to everyone's tastes; the bass/bari is highly effected and auto-tuned, whereas the ladies come across as less processed. The juxtaposition will be jarring to most, I'm sure, but I love it. Plus, it's the most thoughtfully constructed arrangement on the album, highlighting individuals in ways that the rest of the album either doesn't attempt or fails to accomplish.

I hope SeaNote stays together. In this post-Pentatonix age, this group is going to have to up its creativity and energy on recordings in order to make a mark on the acappellaverse. Vocal Static definitely lays a foundation for that to happen. It's just a little too murky right now.

Seattle's SeaNote has presented listeners with a strong debut EP with Vocal Static. It's an especially impressive start given that the group formed just one year ago, in mid-2013 (from members of two different a cappella groups at the University of Washington in Seattle). In that time, they funded this EP via Kickstarter (promising — and delivering — "all-original arrangements"), and came in first overall in the 2014 Pacific Northwest Harmony Sweepstakes Festival.

SeaNote's wheelhouse is Top 40 hits with an asterisk: with the exception of the oddball Scarborough Fair, these songs are all recent radio hits, including those cited in the cute (but ultimately unnecessary) introductory track SeaNote Radio. The asterisk comes as the group clearly delivers its own spin on these songs: the original rap in I Knew You Were Trouble, the mash-up of Dark Horse with Eiffel 65's Blue (Da Ba Dee), and the hints of This Love behind Me and My Broken Heart. These aren't just gimmicks for show-off's sake; these additions and arrangement choices definitely contribute to making this recording feel like a fresh presentation of songs we've all heard a lot as of late. SeaNote's soloist choices certainly help as well: the choices for a female lead for All of Me and a duet approach for Me and My Broken Heart give both songs a unique perspective.

These creative choices don't always work, though. The robotic interlude in Happy feels markedly out of place, and while the Dark Blue Horse mash-up works well as an arrangement, the choruses of Dark Horse are less convincing. With only five singers in the group, it becomes increasingly challenging to ensure that all song choices are home runs with the soloists at hand.

Still, Vocal Static is a fantastic first recording from a brand-new group and shows a lot of promise for the creativity of the group's future endeavors.

With mixing and mastering by The Vocal Company and Vocal Mastering, respectively, SeaNote presents a fantastic release with Vocal Static. The organic nature of the arranging and production is refreshing and expertly matches the vocal skills of SeaNote.

Vocal Static begins with exactly that — static. Over the synthesized radio static, the group runs through some of today's top hits including Roar, Treasure, and Royals, ending with a cute SeaNote Radio tag!

Taylor Swift's I Knew You Were Trouble just keeps getting better. What starts as a straightforward arrangement, evolves constantly, including a dubstep chorus-break and a rap. The contrast between I Knew You Were Trouble and the track that follows, John Legend's popular ballad, All of Me, is easily welcomed with SeaNote's lush, relaxed interpretation.

Me and My Broken Heart has a great sense of arc and structure, naturally leading the listeners' ears forward through SeaNote's seemingly endless amount of textures. SeaNote's arrangement of Pharrell Williams's Happy combined with an energetic solo performance perfectly captures the carefree nature of the original, though I would have liked to hear the group take some more creative liberties with the arrangement.

Vocal Static concludes with a mash-up of Katy Perry's Dark Horse and Eiffel 65's Blue — yes, Eiffel 65. The result is a jaw-dropping arrangement that seamlessly mashes together the individual songs in the most unexpectedly wonderful ways.

In order to go from "good" to "excellent", SeaNote will need to find repertoire choices that are less hackneyed. While the interpretations are excellent, 80% of Vocal Static consists of songs that every group has covered. Everything else is perfectly on point. Bravo!