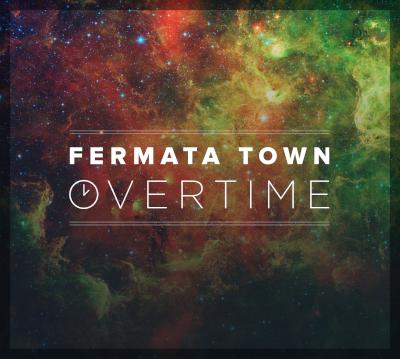 Boston's Fermata Town has an intriguing jazzy flair that makes the best moments on Overtime truly sparkle. This coed CAL group's second album isn't universally memorable, but the tracks that are certainly set this group apart from the rest of the post-collegiate contemporary world.

Fermata Town excels at straying off the beaten path: the group's cover of Billie Jean (with a nice credit to the Civil Wars' cover that inspired the group) is by far the most memorable track here and fits squarely within Fermata Town's jazz-drenched wheelhouse. Twentysomething has an outstanding jazz arrangement, courtesy of Katya Dreyer-Oren and Philipp Walzer, which the group executes superbly. There's no question why Fermata Town made this track both the opening of the album and a single release  — both the writing and performance are flawless.

Some of the other covers here are less memorable. The execution and delivery is still flawless, but there's nothing on the straightforward Ain't It Fun that sounds uniquely Fermata Town, and while the intro to That (Pusher Love) Girl is goosebump-inducingly precise, the song quickly becomes a little monotonous and repetitive.

The ace up Fermata Town's sleeve is the group's songwriting: Philipp Walzer's Not 'Cause You're Mine is a beautiful downtempo R&B track that flows beautifully on this album. Ian Janer and Taylor Meltzer trade solo lines seamlessly, and the jazzy chords in the arrangement add an intriguing texture to the song. Katya Dreyer-Oren's original Starting Line is also a strong addition to Overtime, if not quite as memorable.

There's not a note out of place on Overtime, which might make my overall score of "4" seem surprisingly low. The best moments here are so great — Twentysomething, Billie Jean, Elizabeth Mongrello's passionate solo on 101, and the songwriting and delivery on Not 'Cause You're Mine — that the rest of the album, while good, is just that: good. Fermata Town has shown moments of true greatness on about half of Overtime, and I want to hear that same greatness consistently across an entire album. The rest of the album is still really, really good — but Fermata Town has set the bar at "great".

Founded in 2009, Boston-based Fermata Town has been one of the most successful CAL groups of the recent past. Continuing in that trend of excellence, the group's newest album Overtime is a healthy mix of intelligent covers, imaginative originals, and one infectious medley.

Twentysomething kicks the album off well, capturing the swagger of Jamie Cullum's original with smooth, jazzy backgrounds utilizing scat-like syllables over clear feel changes and a beautiful instrumental solo. The next two tracks showcase particularly strong solos by Amanda Spinella and Elizabeth Mongrello, though the soloist work on the entire album is superb. Alex Cantatore's eerie-turned-edgy rendition of Lonely Boy is a prime example of how to infuse personality, intensity, and a bit of innovation to produce a highly effective cover in both solo and arrangement.

The arrangements on this album are also notably strong, with Fermata Town tending toward a vocal jazz feel as its default but properly adapting it to the style required for each new song. Between voicing, chord substitution, and adding color tones, the group's arrangers show a very impressive understanding of musical vocabulary throughout and don't fall into the transcription trap, even in songs that lend themselves to it. That (Pusher Love) Girl is incredibly smooth due not only to its fluidity between two JT tunes but its subtle updates on the harmonies presented in both originals' choruses.

In addition to strong covers, Fermata Town includes two original songs. Starting Line is an exceptionally honest triple-meter ballad with an occasional metric distortion to keep the listener thinking; all of these things provide a welcome contrast to the rest of the album. Not 'Cause You're Mine also features some metric complexity and intriguing chromatic passages, but seems oddly disjunct with its starkly contrasting sections. As a result, the continuity of the track is lost in a couple of places and makes it difficult to fully appreciate as an active listener.

Overtime features strong soloists, awesome arrangements, and spectacular studio work from Tim Bongiovanni at Northgate Productions. But if there is any place where the album slows down for me, it's the Civil Wars' cover of Billie Jean. The track slows the momentum for the album as a whole, as the Civil Wars' version becomes repetitive. To Fermata Town's credit, the group elicits more dynamic and color changes than the acoustic duo, as well as a stronger climax. But in the grand scheme of this album, this track doesn't quite have the propulsion into the next track that the others do.

It's no surprise that Fermata Town has consistently been in the CARA conversation, and if the group continues at this level, it appears poised to remain there. Overtime is a must-have for not just the a cappella fan, but any music lover.

It's now a common occurrence for a cappella groups to aim high and cover a range of complexities on their albums. The simpler songs that come and go can be great, but the complex songs give you a better feel for the possibilities of the group. What is rare, however, is to listen to a group and feel that it actually thrives on the more complex songs and arrangements; that's where we're taken on Fermata Town's newest offering, Overtime.

Case in point: That (Pusher Love) Girl. It's an incredibly fun song and a well-conceived JT mashup, yet it sounds like the members of Fermata Town are phoning it in. On the other end of the spectrum, Billie Jean has an incredible energy to it, especially when you take into account the slower tempo and added complexity to this arrangement. On the whole, I found myself enjoying the more complex arrangements more than the simpler ones.

I want to keep devoting the most listening time, however, to the originals. Fermata Town includes not one, but two original tracks on Overtime. Major props go to Katya Dreyer-Oren and Philipp Walzer for crafting intricately beautiful pieces that fit nicely into the overall feel of the album while retaining their own unique flavors. Starting Line pairs a sweet melody with a bare-bones arrangement. Not 'Cause You're Mine features a constantly evolving sound, changing in style and rhythm throughout, and some killer solos from Ian Janer and Taylor Meltzer to carry the soul of the song. These originals are the standouts of this album for me, showcasing the best Fermata Town has to offer.

Fermata Town has keyed in on its high musical qualities, and Overtime is clearly a labor of love. I'd love to hear more original pieces in the future simply because they are better than any cover, and when this group is at its best, the album is truly a pleasure to listen to.