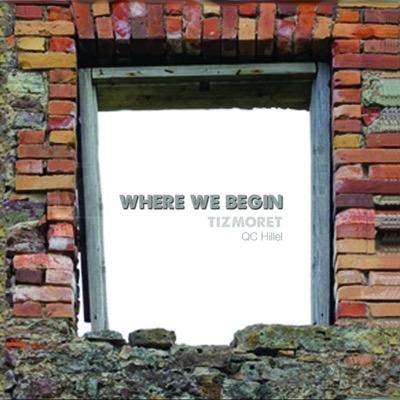 As a fan of Queens College Hillel's Tizmoret — certainly of the group's recorded work in the last several years — getting a new release like Where We Begin is a welcome event that has me brimming with anticipation. This is primarily for which Israeli pop covers I can look forward to, and the generally creative and satisfying ways the group's professional musical director, Daniel Henkin, and his students and alumni will set about arranging them.

A five-song EP leaves a bit less margin for error — or perhaps "fluff" is a better word — as each song gets that much more scrutiny, and lulls or lazier efforts are less easily disguised or overlooked. In that respect, the mysteriously titled Where We Begin (the group has quite a few prior recordings) is something of a mixed bag.

First, we have three English covers. There's nothing wrong with that, except that the group's prior work on pop/rock standards has generally been good, but unexceptional. And when two of the three songs are yet more re-hashes of Royals and Pompeii, there's even less to get excited about. To be fair, the front half of Mordy Weinstein's arrangement of Royals does a nice job of taking the predictable and making it seem at least a bit novel using some interesting syllable choices and crisp, percussive group rhythms in the backgrounds. But it's still Royals and by the back half, it sounds perfectly fine, but also like most other good-quality a cappella versions of the song you've already heard.

Pompeii doesn't fare quite as well, mainly because there isn't even the element of surprise or invention. It's a full, lush if extremely transcriptive arrangement that certainly recreates the song well, but it's otherwise kinda dull until a last ditch effort at variation in the final repeated choruses. Higher Ground is the most objectionable because arranger Jacob Spadaro has opted to try to recreate the sound of Stevie Wonder's classic organ with a nasal "wah" sound that gets repeated ad nauseum — or at least until the syllables change in subsequent verses, but the arrangement itself doesn't. This is already a pretty repetitive song, and the monotonous structure coupled with grating vowels and a complete lack of any dynamics whatsoever makes this cover more frustrating than funky.

On the flip side, the group's two Hebrew-language entries are lovely. Tizmoret has covered quite a number of Harel Skaat tunes in the past, and Achshav is a solid entry in that catalogue. The arrangement by Mordy Weinstein could have used a little less reliance on big "ooh"s and "ah"s, a bit more of his customary variation between verses, and a lot more focus on dynamics; but taken as a whole, rather than in its individual parts, it's solid work. Et Rekod as a composition is the least interesting song on the album, but it's quite similar to any number of English dance tracks one might hear at a club (the title of the song means "time to dance"), and while it does very little to expand on the original — the dubstep break towards the end seems entirely gratuitous — it has an undeniably infectious quality and captures well the spirit of the source material. If anything, the quibble here (and in a few other isolated places on the EP) is that the backs feel extremely rigid (or perhaps sampled/looped?) on a song that cries out for energy bordering on sheer abandon in its performance.

So where do we end on Where We Begin? Not a must-buy by any means unless you really want the Hebrew material. But it's work to be proud of for sure, and hopefully a harbinger of more good work from this group to come.

Short but delightfully, wonderfully sweet, Where We Begin is an excellent release from Jewish a cappella group Tizmoret. The fifth album I've reviewed from this group is my first "5" for the group, and it has uplifting, sparkling, driven music that I'll enjoy for the long haul.

If it weren't for the ladies singing on this EP, I'd really believe this was a Six13 release — though with some personnel and arranger crossover between the groups, I shouldn't be surprised. Still, the vocal talent here is as strong as any Six13 release, which is a major achievement and great news for Jewish a cappella fans.

Speaking to the vocal talent, there are some absolute phenoms working the lead microphone on Where We Begin. I'm particularly impressed with two leads, starting with Simcha Schoenbrun on Pompeii. Without him, we've got a perfectly serviceable rendition of the runaway radio and collegiate a cappella hit. With him, we've got sunglasses-on vocal swagger and fiery excitement, complete with infused Hebrew inflections on "c"-consonants. Now this song is cool again, this track is Tizmoret. Also shining brightly is female soloist Darya Rubenstein on her take in Higher Ground. She's got one of those huge, immediately impactful voices that make your mouth pop open for some whistles and "woo-woo!" action in response to her command. Her jump-to-your-feet presence makes for a perfect closer to Where We Begin.

Tizmoret has struggled with production values in the past, but Where We Begin is crisp and even-keeled under mixer Ed Boyer. It's professional and polished, never jarring or empty, and always brimming with pulsing energy.

On a non-musical note, I wouldn't mind translations and/or song meanings in the liners to add more depth and background to the group's choices. Sometimes groups forget that these notes and extras can serve as a cultural and heritage bridge for the listener; we want to know what's important to the musicians delivering the message, especially when the musicians are this good.

Without hesitation, Where We Begin is a solid choice for your a cappella collection.

Where We Begin, the latest release from Queens College Hillel's Tizmoret, is an intriguing departure from the group's previous offering, the full-length album Start Listening. The group has taken a step away from some of the heavy production and sluggish singing which inhabited most of that album and made a tactical change with arrangements that are generally smarter, lighter, and more interesting from start to finish. The group's decision to stick with a single mixing engineer this time around pays off, as Ed Boyer's sonic consistency gives a cohesive quality to these tracks, which cover a broad stylistic range from Israeli pop to Bastille's Pompeii to Stevie Wonder's classic Higher Ground (as covered by the Red Hot Chili Peppers).

The biggest improvement on Where We Begin is where it all begins, with the arranging techniques utilized by group members Mordy Weinstein, Nathaniel Ribner, and Jacob Spadaro. The jewel of the lot is Weinstein's work with Lorde's oft-covered Royals. From the very first moments of the bare opening verse, Weinstein finds a way to capitalize on the space built into the original with an almost playful hand. The song washes over the listener and each wave brings something enjoyably different from what has come before. The group still relies a little too much on some abrasive syllables in some charts ("wow" should probably be retired or at least put on probation), but there is unquestionable improvement across the board.

As with Start Listening, the lady soloists of Tizmoret outperform the guys, from Yael Cederbaum's even keel on Royals to Darya Rubenstein's abundant sass on Higher Ground. The backing ladies also continue to bring a little more energy to their performances, but the guys aren't as far behind as they were on Listening. The bass and drums are generally lively enough to perk (pun!) things up and help the EP cruise at a briskly-paced nineteen minutes.

The overall feeling of Where We Begin suggests a group going back to basics, stripping down and simplifying while correcting some of the mistakes Tizmoret has made in the past. The result is actually a step forward, albeit one which could use even more excitement and creativity to polish things up. Regardless, Tizmoret has proven that sometimes you have to take a step back in order to move forward.