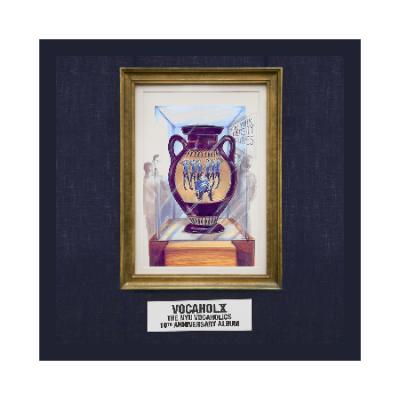 The Vocaholics present an eclectic bunch of songs in their newest release, Vocahol X. While a few tracks are absolutely spot on and showcase the group's talent well, others come with inconsistencies ranging from energy to arranging choices that make the album difficult to digest as a whole.

The arranging choices throughout the album are quite good, maintaining the feel of the original while generally not providing a transcription. The ideas of tension and release are employed with some areas of dissonance and well-executed dynamics. However, the choices employed in the medleys are not generally sound. First of all, just because two songs can be put together doesn't mean that they should. Secondly, transitions should be smooth: catching the listener by surprise with a new song can be effective, but that may depend on how different the two songs are. Both Crazy/Toxic and The Queen Medley have transition issues that don't get a chance to resolve. In the case of the former, the two songs don't actually seem to mesh well. In the latter, the soloists are quite strong. But the Queen songs used in the medley don't read as strongly as their source material because of the simple, lower background parts and the interruptive nature of the transitions, which are uncomfortable for the listener.

There is a lack of energy and intention in vocals, especially leads, that largely impact the first two tracks. Fortunately for The Vocaholics, the last three tracks jump up numerous levels in that department, but that doesn't dismiss the fact that the album starts on a subdued note where the songs have the potential for higher energy and that there is such a stark contrast through the album.

On the other hand, the tracks that stand out are excellent. Lost in My Mind captures the style of the original perfectly with both the solo and background vocals. Mamma Knows Best is the first track that brings a new plateau of energy, starting with the leading presence and attitude of soloist Daniel Evan Sovich and trickling down to the backgrounds. Similarly, the solo by Brian Joseph Hajjar on At Last sets the table and the group as a whole delivers. And while not the most energetic, America is a tasteful, appropriate balance of style and delivery of message through solo text.

Vocahol X has a few hiccups but also a few slam dunks. While the album is a bit broken up between the two, I highly recommend giving the latter a listen.

When I reviewed the Vocaholics's last album, Vocaholics Anonymous, I heard a lot of promise and felt that they were only going to get better from there. I'm happy to see that, after listening to Vocahol X, my prediction was correct. Vocahol X is a good album, verging on great. The tracks are well varied in genre and style, the arrangements are complex without going overboard, and overall the listening experience is very enjoyable thanks to better production quality.

Perhaps the most impressive aspect of Vocahol X is how perfectly suited each of the solos are. From Crazy/Toxic to Mamma Knows Best to End of Time, every soloist performs his song wonderfully. This also helps to show the range and variety of voices that make up the Vocaholics, as everyone has his own unique style.

Helping all this is the track selection on Vocahol X. Some a cappella groups cover only the biggest of pop songs for albums. Others only take on songs that your average listener has not heard before. The Vocaholics put out a nice mix of both, covering some of the biggest names with Britney Spears, Queen, and Beyoncé, to some of the lesser-known artists like Stars and The Head and the Heart. As a listener, you know that serious time was put into determining which songs will best showcase the talent of the group's members.

While there will always be room for improvement, the Vocaholics are moving in the right direction. Good job, guys!

I got excited when I first heard that I would be reviewing this album. Any time that I'm not familiar with an a cappella group, I get to discover who they are. Therefore, when I first listened to this album, I had a thought constantly running through my head: "Who are the Vocaholics?". If the goal of any album is to present the group, then I like to think of it as an essay. The essay should have a strong thesis statement, thorough coverage in the body, and an ending that accurately summarizes the essay without adding any new information and leaving the audience satisfied with the outcome. The topic of Vocahol X is "this is who the Vocaholics are", and I was excited to learn the answer. Unfortunately, while there are glimmers of excellent writing, the overall presentation is very disjointed, and it leaves me wondering if the Vocaholics know who they are.

Let's begin with the thesis statement. Rabbit Heart (Raise It Up) is quite an opening track. There is no preamble to this number. The song hits you hard and it hits you fast. This sound is digital, but the integrity of the voices shines through. There are moments where the voices are so digitally altered that it doesn't become easily noticeable that they are voices, but the added effect is quite powerful, adding subtle textures to fill the silence that may otherwise exist. If this song is to be considered the thesis statement for the album, it's a strong one. I would thoroughly enjoy listening to an album where all songs have this same slick sound as this first number.

However, the body of Vocahol X doesn't match the thesis statement. In fact, it's more likely a better observation that the thesis statement doesn't match the rest of the essay. The sound isn't nearly as digital as the opening number. The rest of the album is much more scattered than the opening. To this point, I would consider The Queen Medley to be the anthem of this. This track is a medley containing six of the most famous songs performed by Queen and lasts just over four minutes long. How do you have six fully developed musical ideas in the course of four minutes? In short, you can't. This song is a conglomeration of six initial ideas but never completes any of them. The beauty of medleys is that a multitude of ideas can be presented, and a new idea is presented once the previous idea has developed. This can create entire stories, told through multiple songs, and presented in one track. However, The Queen Medley never finishes one idea before starting the next, and it leaves me incredibly uncomfortable.

This sort of jumbled idea presentation perpetuates through the album. There are a good number of gender-bender solos. Some of these are in the same key (and octave for the soloists) as the original song, while others are transposed to keys more conducive to the male voice. Styles range from old-school 1960's jazz to Beyoncé to Radiohead, and they are met with varying levels of success. Some songs have styles that are rarities in the a cappella community, such as the mash-up 15 Step/Take 5, which is entirely in 5/4 time. Some songs, like Lost in My Mind, are composed almost entirely of sounds and syllables that have been used for years and are at this point are almost completely tired. Almost across the board, no two songs are the same, and it leaves me wishing there were a pattern or style that perpetuates across the album.

However, as a closing paragraph to the Vocahol X essay, I think we finally found the song that could be considered the overall style of the Vocaholics. End of Time is a classic, transposed gender-bent pop song. There is nothing overly flashy here. The style is a stereotypically modern all-male a cappella. The songs on this album are simple, fun, and pleasing to a crowd without drowning them in musical complications. There are songs that differ from that idea, and the album may have songs that don't fall under the style of the album, but I look to the album liner for what the Vocaholics planned to accomplish. "Thank you for ten years of good ol' a cappella," the group writes. This album is exactly what it set out to be. While the thesis statement may be different, the "good ol' a cappella" essay holds true to the assignment. I now know who the Vocaholics are.

This album is available for sale at thevocaholics.com or by emailing the group at vocaholics@gmail.com.