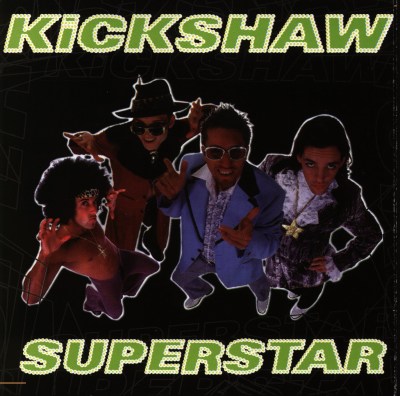 If you are that rare commodity, a fan of both Donald Fagen and a cappella whatever, then you can skip this review and go right to your favorite on-line shopping method to buy KiCKSHAW's debut CD. Likewise, if you are the sort of collector who has to own anything polished and a cappella, you will be delighted with the accomplishments of these four men from the Pacific Northwest.

This is a superstrength a cappella album built to withstand mainstream radio forces. Superstar has very few flaws. Tuning is excellent. Sound is electrified, but appropriately so. Lead vocals are rock-style, if not inspiring, but some of the vocal-instrumental solos rival Paul Stiller doing Stevie Ray Vaughn. (Hey. I live in Austin now. I'm required to get in a Stevie-was-God line somewhere in every review.) The layered, produced sound is excellent and drives home the intended genre. There's a glam-metal influence in places, and there's even some very danceable disco in Dance to the Music and the original My Heart Is My Own.

On a personal level, however, a lot of this album was a nostalgic trip down memory lane. Specifically, a big chunk of it reminds me of the endless (and never resolved) argument between me and my older brother, Serge, who is convinced that Steely Dan represents the pinnacle of rock and roll. I, on the other hand, find his heroes to be perfectly nice musicians doing perfectly innocuous stuff, but it doesn't hold my attention long enough to find the technical excellence that sparks his rhapsodizing.

A lot of KiCKSHAW is like that, or (to put it in genre terms) like m-pact's 2 or the Ball in the House self-titled release. Good, solid stuff — in fact, I much prefer this album to either the Beantown bunch or KiCKSHAW's mentors in the Northwest. Superstar has more variety than either of the other titles I mentioned, and some of the covers smoke. But very little of the original material is the sort of thing I am going to be singing under my breath for weeks on end.

Walkin' Man had some nice moments, and an appealingly simple hook, a nice and catchy piece of work. The Deed was my other favorite original. Great intro, wonderful instrumental solos and jazz sojourns. Even so, I found the bulk of the song — the words, the melody — completely underwhelming. Maybe this is road trip music, then — blast it for its overall rock-ness, not for the merits of any given song.

Papa Was a Rolling Stone had me shakin' my groove thing, as much as one can in a grey office chair on rollers in front of a computer. Innovative arrangement, lots of energy and my favorite cut on the album. Dance to the Music was almost as engaging — I mean, it's Sly and family, how could it not be? But these are not jazz-fusion technical masterpieces, but examples of inherently groove-infused music. (Which I'm afraid cannot be said for Steely Dan. So there, Serge.)

I could tell you how KiCKSHAW's new album Superstar is a huge dose of retro '50s fun (but not in the disco vein), but I won't. I could tell you how the first half of the disc sounds like m-pact in that it mixes Take 6-esq harmonies with mainstream pop songs, but I'm not going to do that either. I suppose I could also talk about how the album sounds like Five O'Clock Shadow, too, because so many songs have that "rock band without instruments" sound. But I won't.

I don't mean to withhold information from you, but I have other fish to fry. I want to talk to you about track six, KiCKSHAW's cover of Dance to the Music. I'm kind of obsessed with it. It's a damn fine cover. It's got tight vocals, that's for sure, but the magic is in the production and the arrangement. Their modern spin on the song features lots of effects, including some fun "skipping" some of which is done by the album's producer, but some of which is delightfully sung by the singers themselves. The two combined create a wonderfully textured sound.

You know the breakdown section of Dance to Music, the one where they add one instrument at a time? KiCKSHAW does a great job with that, especially the "horns". They could have done a horn impersonation (they do a great one on another track), but they don't. Instead they have a vocal line that captures the full-frontal quality of a good horn solo, but is still a celebration of a cappella.

My favorite part about the song is the sampling. I've been waiting a long time for an a cappella group to make good use of some spoken word samples. The sampling on Dance to the Music — taken from an instructional record on disco dancing — was worth the wait.

Now that I've got that off my chest, let's move onto the other highlights. Invictus is a rather dull hymnal, but the reprise is great. In the spirit of Enigma, they add some trippy percussion and spoken word overdub. Walkin' Man (an original, not the James Taylor song) features a hypnotic chant in the backing vocals.

Bottom line, this disc is a must own for all of you FOCS and m-pact fans out there.

KiCKSHAW joins the ranks of the mighty vocal bands with their release, Superstar. The pimp-daddy outfits adorning the hunky a cappella heartthrobs of this all-male foursome bespeak that retro-'70s focus so popular once again. (Shaft, the Movie? Charlie's Angels, the Movie!?! That '70s Show?!???!!) Underpinning the flash of it all though, is KiCKSHAW's tremendous musicality. They can write; they can arrange; they can produce; and man, can they sing.

KiCKSHAW has fully embraced multi-tracking and electronic enhancements in their quest to make extremely funky a cappella. Filling the spectrum from m-pact style lip-buzz to octave-dropped bass parts to screamin' leads to tight jazz chords to wailing faux horns and electric guitars, KiCKSHAW keeps the energy sky-high with a veritable wall of sound. Now the parts are layered pretty thick and it's obvious that there is just no way that four guys are gonna sound like that live. Don't let it bother you. Remember: you're buying the CD as a CD, not as a live performance demo. Where would Queen and the Beatles be if they had been limited to what they could do live? Huh?

More than half the album is original material. From Steely Dan sound-a-like, Superstar to dance club ballad, My Heart is for You to alternative edged, The Deed to my personal favorite, the Native American-influenced folk song, Walkin' Man, these songs have hook, groove, and heart. And, as testament to the strong production hand, the album somehow makes musical sense. The styles fit together. The songs belong there.

Criticisms: sometimes a six-minute jam is just too long. There are a few songs in that range. So what. That's why they have fast forward buttons. And I would have pushed the bass up a little in the mix and compressed the overall sound for a more punchy, radio-ready feel. Whatever. That's why I have an EQ and volume knob on my stereo.

Conclusion: If the phrase "vocal band" appeals to you, buy Superstar. I'd lend you my copy, but I'm afraid I wouldn't get it back.

If you're looking for an CD that represents the latest in rock a cappella, then look no further! KiCKSHAW has really put together one heck of a debut album. There are, however, a couple tracks that really keep it from perfection: Sound Check, Voice, and Invictus. These songs sound great but feel very out of place, especially the first track, whose inclusion felt amateurish and unnecessary (I've also heard this THX intro done on a couple of albums already).

Those tracks aside, the rest of the album truly kicks arse. They really do give you the feeling that you are listening to a rock/disco band with instruments. There is a great use of distortion and other effects. I was a little disappointed to see that there is some MIDI sequencing on a couple of the songs (mostly for percussion). My favorite tracks had to be Papa Was a Rolling Stone and Walkin' Man, although I originally thought Walkin' Man was going to be the James Taylor tune...guess not.

The sound production is just wonderful. Very clear and bright, but with a real good bottom end. The vocal percussion sounds great (very punchy and realistic), I just love it. I really like the bass as well, not too woofy or overpowering but still very round yet focused. Great wailin' soloists! This is a such a great album, you should all own a copy. Go! Buy it now!

Wow! I was blown away by this album. Think STREETNiX meets the Swingle Singers and you'll get KiCKSHAW.

For all the purists out there, be forewarned, these guys are plugged in. It is done in such a way, though, that you can still tell that it is a voice making the initial sounds. There is no doubt that this is still an a cappella album. The sound has been mixed to perfection. Nothing sticks out where it shouldn't, and everything that needs to be heard is heard.

Each track is filled with tight harmonies and amazing energy. You never know what to expect from the songs. I loved being surprised by the Queen chord in Sgt. Pepper's. Even the simpler tunes like Walking Man are fun to listen to. The best surprise, though, was what they did with Invictus. It comes out of nowhere the first time as a quasi-classical piece on a rock album. I thought to myself,"That was nice, but why is there a reprise.". After listening to the reprise, I'm glad it is there. I don't want to ruin the full effect of it, so I'll just give one clue: think Enigma. It was brilliant.

This has fast become one of my favorite albums. It has great music that can be easily listened to over and over again. Overall, it's one of the best. Don't miss your opportunity to hear the future of a cappella.