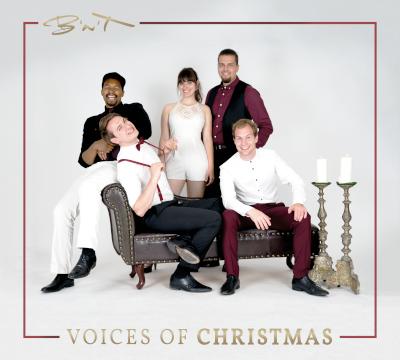 Light jazz Christmas carols, yea or nay? If upbeat jingles over a tasteful drum track sound festive to you, then Voices of Christmas will put you in the perfect holiday mood. This is a cappella, of course, so they're mostly vocal drums. To me, this is the perfect soundtrack for enjoying a Christmas cocktail, mulled cider, or sparkling glühwein.

I say sparkling because music this perky requires at least a few sequins for best effect. I like the sum of this recording better than many of its parts. Each song is short and sweet. All is festive, nothing drags. The aforementioned percussion lines are well designed and executed, varying from song to song while also providing a creative throughline.

My favorite track is Kommet Ihr Hirten, a Bavarian carol that gets the star treatment here. Vocal percussionist Moy (Guerschon Moise) sings his half of the solo line beautifully and Benedikt Schambeck's arrangement offers mezzo Brooklyn Beck a chance to shine. It is immediately followed by a lovely setting of Engel haben wir Vernommen, a French carol known in English as "Angels We Have Heard on High". It opens with a lovely drum-free traditional verse before reverting to the soft-rock mean, and the overall effect works pretty well.

Some of the other tracks have more of a novelty feel. Tino Spieß's O Holy Night has overtones of "howdy pardner" old Hollywood to me, while Von der Ersten Noel is a little nasal for my tastes. I enjoy the arrangement of We Three Kings more than its delivery, and I must also confess that the verse of Heimkommen sounds an awful lot like the tune Call Me Maybe to my jaded ears. But these are small quibbles. If you put this album on during your festivities, you will probably enjoy it and hum along frequently.

The closing medley that starts with, and is named after, Carol of the Bells, is a fitting capstone. From hark how the bells to wish you a merry christmas to tidings of comfort and joy, it's holiday fun for every lounge lizard with a santa hat.

The German quintet B'n'T has joined the long line of a cappella groups to release pop/rock-infused holiday albums with Voices of Christmas. If you are in the mood for some off-kilter music with some flashes of brilliance to offset the multitude of available All I Want for Christmas covers, then you may want to give this album a try. It's definitely not for everyone, but it is a bit of quirky fun, and isn't that what much of the holiday is supposed to be about ... having fun with friends and family?

Honestly, upon the first few listens the album sounded like a junior version of a mixture of Pentatonix, Blue Jupiter, and Apes & Babes. The good part: these folks are willing to try almost anything. The arrangements often mix genres and styles seemingly willy-nilly. If your mindset is in the right place, all of it works, otherwise you may be scratching your head in disbelief or throwing your headphones (earbuds) across the room. Either way, the group makes some memorable music and isn't afraid to push the boundaries of tonality and intonation to get its points across. For example, you'll possibly love the inclusion of the memorable intro to Circle of Life as an underlying rhythmic motif in Kommet Ihr Hirten. Like I said, different tastes for a different kind of holiday party. Stille Nacht is the most accessible and also the most harmonious of the tracks. In fact, it borders on breathtaking. The voices twist and turn as they share various lines of the melody. Even the additon of a guest cellist (!) doesn't detract from how well the song is performed and sounds. Kudos.

What does put the biggest smile on my face is the gem of a track that ends the album. Carol of the Bells is possibly my favorite Christmas carol and B'n'T does an excellent job with its rendition of the classic. It's no Return 2 Zero (whose "Carol of the Bells" won a CARA for Best Holiday Song in 1997 and 1999), but the group really succeeds here for the most part. The inclusion of God Rest Ye Merry, Gentlemen is a great surprise.

The bad part: there are a lot of intonation and diction problems on every track. It occurs most often from the men on their solo lines. The high nasality pushes on the upper edge of being sharp all of the time. It's odd because the background blend is often spectacular where the pinched quality is used as percussive moments in many of the tracks. Actually, the group's bass (Tino Spieß) has a rich and melodic voice, even in his subbasement range.

And that subbasement range will occasionally get in the way. A couple of times the subdrops added to Spieß's solos are used for the "Ooo, look what I can do" factor more than adding anything to the track. It is interesting the first few times that you hear it, but then becomes expected whenever you hear him sing, and when it doesn't happen it's not so much that you miss it, but the track is now missing something. The album covers German, English, Latin, and Spanish to varying degrees of success, and the mixture of languages seems unintentional on certain songs. For example, I have a hard time discerning if the group is singing English or German on a particular lyric in Von der Ersten Noel.

While the album as a whole isn't great, it is fun to listen to a couple of times. I listened to some tracks off of the group's pop album and the vocal quality and tonality completely fits with the style of B'n'T. I understand why the group released a Christmas album; many groups choose to do one (or multiple) at some point. To be honest, I'd rather hear more of B'n'T's pop songs. And you probably will, too.

The chance to talk about B'n'T's Voices of Christmas is an extra treat for this German-speaking reviewer! There is nothing like German Christmas music, and this charming album comes with a fun and creative spin on well-known classics.

The overall sound is clean, but certain songs feel imbalanced, especially towards the bass. Heimkommen ("Homecoming") and Kommet Ihr Hirten ("Come, you shepherds") especially sound empty because there aren't enough of the higher voices in the background vocals.

Sometimes in the solos, or when there's only one voice on a part, the pitch gets a little messy, which causes problems in the album's more traditional choral moments — the beginning of Stille Nacht ("Silent Night"), parts of Engel haben wir Vernommen ("Angels We Have Heard on High"), and the crunchy chords in We Three Kings. Soloists have a habit of sliding between notes, especially on voiced consonants, which might be to blame for some of the imprecision in the sound.

The arrangements are very fun and inventive, but some of the group's innovation doesn't quite land. Kommet Ihr Hirten feels very rhythmically off-kilter throughout the entire song, and the chords in the chorus of Feliz Navidad sound jarringly wrong, not only when compared with the original, but in terms of natural and logical chord progression.

One of my favorite songs on the album is an original, Mein Geschenk ("My Gift"), by B'n'T's own Simon Wagner and Tino Spieß. Like Heimkommen and Carol of the Bells, it really embodies what the group does best: a quirky and sweet sound that brings home that holiday music nostalgia. The final track on the album, Carol of the Bells, mashed up with other Christmas favorites, is B'n'T's innovative spirit at its finest — the chords and progressions are new without feeling jarring, and the arc of the song builds excitement consistently to the end. What a way to sign off!

Voices of Christmas is a delightfully quirky listen with some standout moments. Thank you, B'n'T, for your energy and your creativity, and for what I can only think to describe as that "warm-fuzzy" holiday feeling. Frohe Weihnachten!