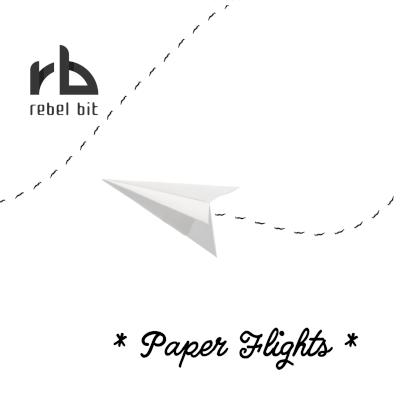 Paper Flights is a heady concept album, an artsy cross-pollination of reimagined Italian and international pop songs representing the emotional states of The Little Prince by Antoine de Saint-Exupéry. Would the particulars of that concept be perceptible to a casual listener? Unlikely. But would that listener nonetheless be powerfully drawn to Rebel Bit's lyrical, hypnotic interpretations? Without question.

Ranging from a lounge style to a gentle rock, a sparse electronica to a jazz ballad, Rebel Bit still delivers a unified narrative. And speaking of narrative, Rebel Bit has released several different versions of Paper Flights, some with multiple extended Italian monolgues. (We have chosen not to review the monologued version.) For an electronically enhanced recording, Paper Flights maintains an incredibly natural, organic quality. It's a rare achievement that underscores Erik Bosio's singular talents at the mixing console.

The theme of the album determined the song order, at least to a degree, but as it happens the material seems to get stronger as the album progresses. Perhaps it's better to say that the emotional landscape opens to allow the group itself to express ever deepening emotion; but in any event, the pathos in Facciamo Finta, Piccola Anima, and the heartbreaking Fields of Gold is a touchstone of authenticity. Paper Flights is more theatrical soundscape; Pure Imagination, a perfect ending to a strange journey; and Violato, a striking art song set to a dash of electronica.

The skillful studio work allows for the most lovely of imperfections, even while ensuring the perfectly intonated micro-resolutions listeners have come to demand. The forbearance to allow and even protect the singers' humanity is the very heart of this album, elevating it immeasurably. The result is something so unusually present, so real, that the storytelling overflows, exceeding even the singers' talents, a greater and unexpected sum. It is the world these singers weave and its believability, and not the singers' individual brilliance, that leaves the most lasting impression — with the possible exception of Supremacy's rangey, edgy, even Cirque du Soleil-esque rocking lead countertenor performance.

At the end, one is left with the fading memory of a daydream, a story just out of reach, more emotive and gestural than specific. It's a beautiful and unique piece of art. And for the attentive listener seeking an a cappella journey to parts unexpected, Paper Flights is a must.

Though more of them have cropped up in recent years, true "concept albums" are still relatively few and far between in the a cappella world, and Paper Flights from the Italian foursome Rebel Bit is among the more ambitious of those I've heard.

That ambition, however, proves to be a bit of a double-edged sword for this release — based on a live stage show performed by the group — which has noble and well-meaning aspirations that it only sometimes achieves. Paraphrasing from the group's own words, the show/album was conceived using the story of The Little Prince by Antoine de Saint-Exupéry as its inspiration, seeking to associate each singer with the four main states of mind featured in the story (Joy, Sadness, Anger, and Belonging) in order to explore themes of friendship and love, the meaning of life, and the frailty and melancholy of contemporary humankind. In addition to covers of Italian and English-language material, original music by the group's members and quite a bit of spoken word material is included on the album (though the spoken word material has not been considered for this review).

It's difficult to judge from the audio recording alone if experiencing this material live might do more to make it live up to the heady goals set by the group, but as a collection of twelve songs (the opener is less of a song and more of a mood-setting spoken piece), it's fair to say that it's tightly performed, and crisply recorded, and at all times a cappella musicmaking. There are some nifty reharmonizations in selections like Fields of Gold and Pure Imagination (where those unfamiliar with the Italian covers will probably be best able to appreciate them), a handful of beautifully layered and textured arrangements such as La Mia Versione Dei Recordi, and a few solo moments that delight for either for their energy and power (Supremacy) or for their seeming effortlessness (the duet scat in Pure Imagination).

What the group has not managed to achieve is true consistency of these elements throughout the album. While Rebel Bit (quoting from the press notes sent with the album) strives to deliver "some of the most beautiful songs in the Italian and international scene, reworked in a completely original way", the results are not quite that groundbreaking or inventive. A song like Love and War might not be simple to reduce to a four-person a cappella arrangement (even with electronic processing and looping), but what Rebel Bit has done with it feels fairly straightforward. To try and give everything its due, I also went back and listened to some of the Italian material in its original form and found that songs like Facciamo Finta and especially Piccolo Anima (though not a duet here as it is in the original) — while certainly well-rendered, and I imagine enjoyable for those who already are fans of the songs — are otherwise not especially engaging or inspired.

The original compositions aren't "reworked", of course, but here too, the results are a bit of a mixed bag. The lyrics of Outside are quite beautiful — more literate, in fact, than a great deal of what comes from native English speakers! — but the musical treatment sits squarely in the same place, same volume, and same texture, for nearly the entire song and thus, the impact and resonance is mitigated. This sameness and limited range of Violato was similarly unfulfilling for me. Interestingly — as his music is not usually my thing — it was the Philip Glass-esque, hyper-repetitive title track, Paper Flights that proved most satisfying of the originals for me, distilling the intent of the song down to a single line of lyric that is introduced only past the halfway point of the song, after it has built "instrumentally" from virtual nothingness to a lush band enveloping a background of harmony.

Now if you're feeling adventurous and perhaps also have a solid, working knowledge of Italian, you might wish to pick up this album anyway. While I can really only admire the attempt that was made here and assess it with a certain amount of inherent distance, I expect your appreciation (and possible enjoyment) will run deeper. But to be clear, I don't wish to suggest that the group should have aimed lower. Not by any means. This is the sort of idea that is fantastic and for which we should hope for more in the world of a cappella. As in all things, it's in the doing — and while this is quite good, I just wanted it to be that much better.

An extremely well-constructed show-turned-album focused on the unification of storytelling in multiple languages with each of Rebel Bit's four singers representing a state of mind, Paper Flights is a fantastic display of emotional and aural versatility seldom seen in the recorded a cappella realm.

While the group commits fully to the concept of combining vocals with an electronic element, the resulting tracks are not overly electronic in nature, though these electronics do serve to fill out the sound. The range of expression from track to track is astounding. And even without a translation on hand (if you're listening in a non-native language), the singers' emotional clarity radiates from solo and background parts alike. The pacing of the album is such that these varying expressions are smooth. For example, the rock ballad power of Love + War leads to the thoughtful, wistful, minimalistic Facciamo Finta without a jarring feeling or an energy drop-off. On the contrary, the listener is captive and can fully explore a new piece of the human experience as the soloists switch, a unique facet of the quartet experience.

Credited for the group's arrangements, group member Lorenzo Subrizi deserves an incredible amount of praise for such distinct pieces, both covers and originals. One of the biggest standout covers is of Sting's classic ballad, Fields of Gold. The simple addition of the flat-six scale degree early on gives a sense of anticipation which the rest of the arrangement delivers upon, progressing into a true choral ballad complete with varying textures, complex chords at the perfect moment to highlight tension and release, and a consistent support to the recognizable melody without detracting too much focus from it. From there, the original Violato provides a perfect transition into a cover of Muse's Supremacy, which is laden with guitar filters that would seem heavy if not for the fact that it's a sound previously unheard on the album, therefore providing a worthwhile complement. Pure Imagination is an incredibly innovative take on an already delightfully eerie tune with an elaborate, jazzy bridge section that transforms the song into something patently belonging to this group.

One notable element is that, while the soloists are always well-supported and the focus between them and the background is balanced, they are never particularly showy. The music is served by overall mood and conveyance of text rather than the extremity of range or ornamentation, which is a refreshing contrast from many contemporary artists today. Soloists receive a "4" in this review not because there is anything inappropriate about this interpretation, but because a sense of the strength of voice is not established with the material presented. This explanation is meant to exonerate the group from what appears to be the single blemish on an otherwise unanimously excellent review: the choices made from a solo standpoint are subdued, but still highly effective.

If you're looking for a unique, imaginative, transformative experience with a stellar execution to match the strength of its concept, Rebel Bit's Paper Flights is for you.

This album streams on Spotify.