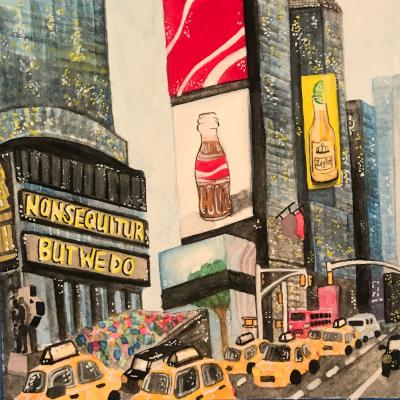 Words on a page need punctuation to provide structure and clarify where one idea ends and the next begins while sometimes indicating tones or perspectives or asides and giving your brain a moment to pause and digest and react and as when you are speaking in person and without punctuation serving these functions and many more it can be hard to derive meaning from all the words on a page.

The author is Nonsequitur, a co-ed group from Columbia University specializing in songs that, based on YouTube hits, range from wildly popular to niche popular. As with many groups in this category, Nonsequitur has a deep roster of talented soloists and an ear for catchy melodies. With some help from the editors and mixers at Vocal Company, the vocals are all pristinely in tune with each other and in time with the proud, slightly stylized percussion.

The publication is But We Do. Each of the eight arrangements is a vignette that instills emotions and reveals something about the author. We learn that Nonsequitur dwells in the R&B side of contemporary music, where the emotion is never cheerful but also never morose. Despite all the lyrics being about failed relationships, there are rhythmic details like the syncopation in My Same and Black and Gold, and the driving percussion in Where Did I Go? and Location that keep the mood upbeat. It's a smart middle ground, and But We Do demonstrates that Nonsequitur can put together a complete set list that flows seamlessly from one idea to the next.

Which brings us back to words and punctuation: the building blocks of each arrangement. But We Do has a lot of words and not enough punctuation.

Sometimes the words are, quite literally, words. When using echo and call-and-response there is a fine line between backing vocals emphasizing the solo and just creating cacophony. G Train crosses that line. In general, the climactic final choruses of songs are layer upon layer of lyrics that don't really fit together. Even when the metaphorical words are block chords and syllables (Why Don't You Love Me), the constant riffing by sopranos, altos, and tenors adds too much density to have effective dynamic peaks and valleys.

What Nonsequitur really needs in order to excel is more punctuation. More "," and "..." to hold us in suspense between verse and chorus. More "???" feel changes that take songs in new directions. More "!!!" stunts that blow our minds. The synergy is there in Don't Wake Me Up. When Nonsequitur punctuates its savvy vocals and melodic ideas with narrative timing and expressiveness, that's when words on a page become music.

The title of the latest release from Nonsequitur is But We Do, presumably in reference to the recurring phrase in the first track, My Same. But, doesn't it feel like there should be a fourth word in that title? What does the group do? Let me complete the title for Nonsequitur ... groove.

From the first track to the last, this album just grooves like a well-oiled machine or a finely-tuned jazz band. While a number of the tracks on the album are from the pop genre, the arrangements and performances do have a little bit of jazz influence to them, making the album very easy listening. In terms of highlights, there is a lot to mention, and not a lot of space to mention all of them in this review. Let us start with Sam Sparro's Black and Gold. Over the years, I have heard a number of groups cover this piece, and I can assure you that none of them has featured a scat solo in the very beginning. But, that's how Jason Lei starts off his take before gliding into the solo with an ease and a swagger that I am sure Sparro would applaud. The bass and vocal percussion do not try to do too much, rather just follow Lei's solo and provide that rhythmic support that is spot on. And the background vocals and harmonies are steady and well-blended throughout, giving Lei the freedom in the choruses to change up the solo line a little bit to add a little flair, too. Just well done all around.

Lei is not the only one who can deliver a smooth solo — this record is full of incredible solo lines that make But We Do what it is. Zach Trinidad is fantastic as the lead on G Train (arranged by Lei), really shining on the choruses where he negotiates his chest and head voice with ease. You can hear Aiyana White's passion and desperation throughout her performance in Say You Love Me, which is absolutely heartbreaking for the listener. And that is not taking into account the amazing vocal control that she has with the little flips and riffs that she inserts throughout the verses and choruses — the falling off on "think" at roughly the 3:20 mark ... just perfect.

Location has one of the very few moments where I pause for a second. The vocal percussion is usually spot-on throughout the album, but here the snare hits are a little too much in the choruses and overshadow the vocal lines. I like the groove that the percussion provides in the verses, and am curious why Nonsequitur decided to change it up this much in the choruses.

Overall, though, this is a fantastic album from start to finish for Nonsequitur, and I am already very excited for the group's next release to see just "what they do".

A cappella groups search for extremes and powerful highs and lows so often that they forget that there's also beauty found in the middle. Columbia University's Nonsequitur captures this beauty on But We Do so impeccably that it's downright refreshing.

What do I mean by this "middle"? It can mean a number of things, but best summarized as all the subtleties that are hard to notice unless you look for them. Microdynamics in terms of ebb-and-flow of a phrase — rather than simply contrasting between the louds and quiets. Having a great sense of rhythm, particularly swing. Varying textures in solo work, shaping phrases with varying tenderness or intensity. And all of the above with a great foundation of tuning, blend, and balance.

But We Do's first four songs have all of the above. The sultry My Same comes out swinging (pun slightly intended) with a smoothness and patience, both from the group and the soloist Dunay Bach — surprisingly rare in collegiate a cappella. G Train is not quite as stylish, but I love how it constrasts moments of sustained pad notes with deliberate negative spaces when it wants them. It allows for a variety of textures to express interest, rather than simply "louds" and "quiets" without ever feeling empty. Say You Love Me is a beautiful delve into a more emotional side of the group. The background lyrical embellishments and echoes consistently add just enough without even once distracting from Aiyana White's beautiful solo, and both the group and Mikhail Qader's arrangement deserve credit. Black and Gold is probably my favorite song on the album — in addition to contrasting Say You Love Me perfectly, every bit of smoothness and patience I praised in My Same comes back in full brilliance. Jason Lei fronts Black and Gold with the same level of care and elegance as he does with the arrangement of My Same, and Shin Cousens's arrangement for this one is no slouch either.

None of these songs completely reinvent the originals they cover, or have crazy intense highs in dynamics, or have crazy complex and nonstop cluster or jazz harmonies, or have a solo with some insane riffing ability. The reason why this works is precisely because Nonsequitur simply focuses on being good. This distinction is what allows the group's strong fundamentals, great sense of subtlety, and fantastic understanding of rhythm to shine.

I was absolutely hooked to this album for the first half, ready to give it an easy "5". Unfortunately, the album begins to lose steam in the second half. The comfort found in the middle that I'm describing starts to restrict creativity and interest. Song selection starts to mesh into similar qualities of mode, dynamic range and structure, while musical choices start to become predictable. And when Nonsequitur finally tries taking a step into bigger high points in Why Don't You Love Me, the voices almost sound defanged, afraid to unleash greater power. But We Do, while never housing a bad song, becomes a bit underwhelming because of its unrealized potential.

On a completely different note, I should mention that better detailed liner notes would be appreciated in the future. As always, original performing artists is unnecessary (yet helpful), but crediting original songwriters is extremely important.

But We Do demonstrates amazing attention to musicality and subtlety that few other collegiate a cappella albums work as hard at. Nonsequitur focuses away from the big highs and lows and instead on the beautiful middle ground that connects them. Nonsequitor has a fast track to becoming one of my favorite recorded a cappella groups if these musicians learn to use this proficiency as a means for more future risktaking, rather than risk avoidance.

But We Do streams on Spotify.