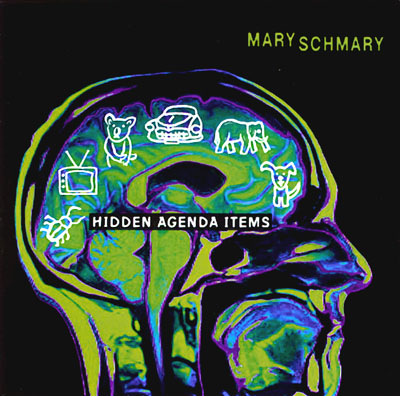 Mary Schmary are like a group of irrepressible friends: they are zany, infectious, and full of energy, and sometimes they drive you up the wall.

Hidden Agenda Items is an album that puns twill and tuille, sings about Babar the Elephant and parodies Peter, Paul and Mary by singing If I Had a Hamster. It combines moments of sweet music and true originality (Bug Girl) with an overdose of vocal takes, laughing-in-the-studio tracks and almost funny riffs. I bet they were funny if you were there, or part of a good-natured, drunken late-night collective. But before midnight, sober listeners end up missing out.

This is an album that actively minimizes the dulcet singing voices of its two sopranos in favor of their two femibasses. The sopranos are much less inclined to be flat and have fewer vocal tics, not to mention a fair amount of soul. But the low melody reigns supreme. The result is that even though I want to like these women — love their first album, enjoy their live show — by the end of Hidden Agenda Items I wanted to send them to editing school and a melody interpretation class. These women are so gifted — the arrangements are incredible for just four women, the background tuning is likewise excellent for its type — but I find some of the leads unbearably grating. And my discomfort is heightened because of my respect for this group, what they are doing and their artistic vision.

This disc packs a wallop, but it may leave you disgruntled rather than energized. Some listeners will find Mary Schmary funny, and some will find it just too cute — and too full of itself — for words. Before you buy, think about whether you want to spend three quarters of an hour with the women who masterminded this disc, with all of the glories and goobers included therein.

Mary Schmary, the nine-year old, San Francisco-based, female quartet has put together a very interesting final collection of original a cappella songs, improvisations, intros, and interludes (they throw in a couple of covers as well). Before hearing this album, I've never heard Mary Schmary sing before. The first thing I thought when I played the CD is that, to me, they sound a lot like Zap Mama. Upon further inspection, I discovered that the quality of the singing, as well as the overall production, were nowhere near the quality of Zap Mama. The intonation was not quite on, at times, and the singers voices are nice but nothing to write home about.

A major gripe I have with the album is with it's excessive use of "interludes". These are outtakes from the studio that are just plain un-funny to anyone not related to this group. I understand the desire to include lots of "footage" on this final album (apparently the group has now broken up) but I think it would have been a better offering had they simply showed some restraint and not included "the kitchen sink" (as they noted in their album booklet).

The originals are witty and slightly catchy. The lyrics have a bit of a Moxy Früvous feel to them. They tend to start out like they are serious and get silly pretty quickly. Personal favorites of mine where: Gooberoni (I still have no idea what the song is about), Abraham on the Bay Bridge, and If I Had a Hamster (great use of the HamsterDance.com song!). There are several improvisations included, but I was not very fond of them. Once again, they contribute to the "kitchen sink" that I found to be a little bit much.

Overall this is an okay album. If you take your handy CD burner and copy only the tracks that are written-out songs, then you've really got something that is pretty decent and may even earn itself a repeat listen or two.

Mary Schmary leaves the a cappella world with their final album, Hidden Agenda Items, concluding a nine year tour. Mary Schmary is, simply put, four very talented women doing what they love to do. They sing together with a very positive energy, but an off-center style that I had a hard time understanding.

I don't know if I could successfully categorize Mary Schmary into the genre of a cappella music. Drawing no comparison to mainstream bands, I'm going to reluctantly say that they produce an "alternative" a cappella sound. A word or warning about all of the originals on this album. If you're not a fan already of Mary Schmary, you may not like the style. For me, effective songs are ones that involve me in a scene, or are cut so realistically from the fabric of life, that I could be a part of it. There wasn't one song on this album that gave me that feeling. Instead, the songs left me with a very puzzled look on my face.

I couldn't find more than a handful of places on this album where elaborate sound production was used. A very straightforward mix and furthermore a very thin sound.

One of my biggest complaints is that somehow the track list printed on the liner notes doesn't match up with the CD. For instance, if you want to listen to Where Am I, it is labeled as track 15 in the liner notes, but on the CD, it's actually track 14. Nothing earth shattering, just a little peeve of mine. The other complaint that I have is with all of the spoken interludes that are supposed to be funny. I hate to use this word, but these are just downright annoying. They're planted sporadically all over this album, and just to rub a little more salt in the wound, there are three of them to close out the album. (tracks 20, 21, and 22 even though the track list stops at 19 in the liner notes... hmmm?)

This isn't an album that I'm going to be telling people about or one that I encourage people to buy. When measured up against the general body of a cappella music available this one falls short of center. I'm sure that they have a strong and loving fan base that appreciates their sound and the messages that they convey, but if you haven't been hooked yet, this album won't do it.

Really. I admit it. I just don't get it. Now maybe I'm just the guy who is too slow to get the joke, who is somehow just missing the point that's staring him right in the face. Maybe I'm just decidedly uncool. But I just simply do not get it.

Hidden Agenda Items, the farewell album from the nine-year old group Mary Schmary is a hodge-podge of songs, intros, improvs, and odd humorous bits compiled on a CD which has 22 tracks — 19 listed tracks (which are actually 18 tracks on your CD player) + 4 hidden tracks, one of which is made reference to in the liner notes — but which is less than 45 minutes long!

The humor is sometimes random, sometimes absurd, and sometimes so completely incomprehensible that it warrants a chuckle. But more often than not, it seems to fall under the category of "you had to be there". Maybe when you're sitting in a cozy bar in an eclectic neighborhood after having a few drinks, it all makes sense but on this album, it's just kinda there.

The improvs border on pointless — improvs either work or they don't and if they don't work, they may be amusing but really only to the people trying to do them and not to the people listening at home. Again, maybe I'm just not hip to some sort of nouveau-brand, avant-garde a cappella, but for me, even if it's successful in performance, it isn't on an album. Then again, from what I can surmise about Mary Schmary, that may be precisely their point in including it.

So what about the music? Actually, not bad and in some cases quite good. I will admit that all-female groups have to work harder than anyone else to satisfy me musically. Biologically, they just have a tougher time creating a full, rich sound and fair or not, it can be an obstacle to creating great a cappella.

Of the 22 tracks, 14 could truly be called songs in which Mary Schmary tackles such mind-twisting issues as annoying tailgaters in traffic (Gooberoni), biblical patriarch Abraham being arrested by God for a traffic violation in San Francisco (Abraham on the Bay Bridge), and the place of women in America (a quite profound Where Am I). Parodies also abound: a Christmas message called Don't Buy Anything set to Dona Nobis Pacem, another Christmas tune Sam and Roz set to Santa Claus is Coming to Town, and a graphic tribute to a household pet entitled If I Had a Hamster — the latter two are unlisted tracks.

Ah, well, from what little research I've done, I've learned the Schmaries have quite the cult following. Maybe the key to understanding them can be found in one of the alternate album titles offered by the group in the album's final track: "Deceptive because it's only subtle". For me, it was just too subtle.

And I still don't get it.

Mary Schmary is a quirky female quartet and Hidden Agenda Items is their final album — maybe. With the exception of I'll Take You There, the music is an eclectic mix of original compositions and improvisations. It was definitely the most weird a cappella album I have ever listened to. From improvisations based on Bible verses/koalas to comedic songs about tailgating/Babar the Elephant King to songs with definite political messages, the Schmaries cover many bases. They are proponents of girl power in a non-Spice Girl way. Let's call it the empowerment of women in a Gloria Steinem/Hillary Rodham Clinton way. Bug Girl "reads too much for her damned good, she doesn't have a boyfriend, she wears the wrong clothes", yet she and we (women) will "rule the world". I'm inspired to be a Bug Girl. It's time to throw away my Express card; I think I qualify on all other counts!

Use of effects is minimal, and gives the sound a live feel. It is a high-energy album even without vocal percussion, though real tom toms are used on Gooberoni. I wasn't greatly impressed with any of the soloists, but I don't think the Schmaries' music was meant for sweet, beautiful voices. I just wish I had one bass that low in my all-female group. The arrangements sounded very full for only three background parts and a soloist. My favorite song was a hidden track, which I'm going to call If I Had a Hamster. Don't even ask. If you want an album full of songs you know and cool effects, pass this one by. If you are a girl without a razor and proud of it, or have a sense of humor that few of your friends appreciate, this album will be just right for you.