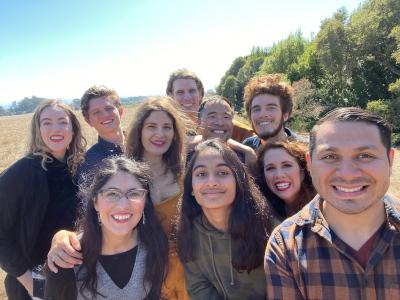 I had to sit with Finding Connection for a long time to process and prepare and present my thoughts on the intersection of experience and expectation. First things first: this isn't a good album. In the grand scheme of a cappelladom the recording lacks one key element that makes Finding Connection rough/tough to listen to as a recorded product. And that key element for singers is the most basic of all components — blend. In the age of near-perfection blend with auto-tune and other tools of the trade, it seems like the singers on this album were instructed not to care about that music fundamental (along with rhythm, intonation, and balance) when recording the album because it would be fixed in post-production, and then they forgot to fix them.

Now from an artistic standpoint, this should be (and is) right up my alley. Especially during the time of quarantine when many people are yearning for connections beyond the computer/smartphone screen, this recording could be considered prescient. Finding Connection by composer Alexander Frank (here also working under the moniker SmokySunday) is an experiment in art songs and story songs that almost meld into a 21st century musical about lonliness and isolation and how we can overcome the social media obstacles that prevent us from actually making connections. There are actually thematic elements and motifs that could have been culled directly from In Transit. And funnily enough, many passages are reminiscent of arias and songs from the Midsummer a cappella opera that I did several years ago. Especially those top sopranos who have gloriously wide vibrato that they are not afraid of unleashing. Brava, diva, brava.

There are moments of excellence. I love Maria Caycedo's voice as a soloist; the timbre is booth soothing and captivating at the same time. Her solo on Ready or Not is truly magical. And as a whole song, it's probably my favorite on the album. What's interesting is that one of her lyrics is "but the thing about being a soloist, is that when I stop, there's no more music". Profound, yet telling in a sense because the background could be removed (though it's good here) and I would probably be even more mesmerized with the number. Hers is an evocative instrument that's she's learned to master. Anisha Kumar is also a soloist to look out for in the future. Her plaintive voice is just delicate enough to make you feel extremely foolish for not answering her question correctly on Why Don't We Just Talk. And Manuel Rodriguez-Ruiz is great with his oration on Cut Off, which is entirely spoken; his acting restraint captures the despondent phrasing perfectly.

In a nutshell, there are some major missteps that really mar what could have been an excellent endeavor. The sopranos are given too much freedom on some tracks to wail on chords that don't need to have that much weight and force on the top. The rapping doesn't work. Some of the tracks top the four-minute mark when they really shouldn't. Introduce us, make your point and get the hell out of there, don't linger like that last guest who doesn't have anything else better to do.

I listened to some of the other work by Alexander Frank (one being a 12-minute opera, ding ding ding) that is quite lovely. So I know that just below the surface is a musical genius, I just hope that not everything he thinks of has to go into one track (or album).

Proceed past the technical elements of Finding Connection and you'll arrive at a quirky and eccentric world of creative a cappella like nothing you've probably experienced. The methods are a bit unorthodox. The sounds, likely unfamiliar. But in a world of heavily processed pop offerings, Alexander Frank's latest project stands out, and isn't this what we've constantly begged of our community?

Finding Connection is an album full of risks, plain and simple. Employing an ensemble of various singers, Frank has produced eleven tracks where each is an original, not only lyrically, but sonically. Throw out your expectations of standard syllables and heavy production. While many of the tracks have musical theater appeal, the majority are best classified as experimental a cappella where the art truly takes priority.

The album offers an assortment of styles. From the indistinct vocalizations to open Missed Connection to the spoken word in If I Log Out, the project is ripe with unexpected surprises that contribute to its musical identity of using the voice to imitate life. Other times, the backing vocals' playful creates a musical landscape, such as what's evidenced in Why Don't We Just Talk is so captivating, you cannot but help to enjoy its non-traditional structure.

My favorite moments on Finding Connection occur when the song lyrics are in utter harmony with the style and nuances of the track. Give It Up (for a cup) expresses this idea well as it showcases humor, theatrics and varied rhythms all around the subject of consuming coffee. (Not to mention it's one of the album's most balanced tracks.) Cut Off offers similar sentiments, but in a more sober fashion as the soloist laments the perils of losing human connection due to technology. It is in this track that you understand the overarching message of the album.

Finding Connection is highly inventive in what it offers up, but comes with a set of vocal limitations that can be hard to ignore. For starters, the sheer energetic force that the ensemble displays at times, while appreciated, affects tuning across multiple tracks.

Perhaps the most glaring issue lies with the album's balance. I believe this comes down to three individual factors: production, group cohesion, and arranging. At times, the levels simply need adjusting. Other times, it's a matter of over-singing by individual parts. In terms of arranging, I feel that there are some wonderful concepts presented in the arrangements, but they are simultaneously competing with an overabundance of other conceptual ideas. Fine-tuning this would really help listeners stay focused on the most important parts of the arrangement.

In its totality, Finding Connection presents an authentic exploration of sounds and uses the human voice in ingenious ways. We need more artists like Alexander Frank to traverse the vocal landscapes that others aren't willing to. This is how we continue progressing the art form into new horizons.

The headline for Finding Connection is that it's all original content. When it's all original, there are some cool things that can happen just due to a general lack of original source material to roughly follow. Composer Alexander Frank uses this to his advantage, letting the group utilize all sorts of different sounds and styles — whether it's the cacophonous speaking lines of the opening seconds in Missed Connection, the use of whistling and overtones in Why Don't We Just Talk, or even the use of slam poetry in Cut Off. There are some very bold takes across Frank's creations, and it's really cool to see what could very well be new styles of a cappella unfolding before us.

However, when I start listening to this, I hear a lot of growing pains that many arrangers have gone through when working on new sounds or styles. The first is understanding the ranges of each voice, and learning that just because a member can hit certain notes, it doesn't mean that they should. As I listen to Give It Up (for a cup) or End of the Line, there are some incredibly high soprano notes at the end of these numbers. It's really impressive to hear that much force behind such extreme notes. However, the supporting notes in the chord don't even come close to matching this intensity. Therefore, the chord just becomes one high note and a fuzzy idea of all the rest of the chord. The fix is to lower the entire chord to a point where everyone supports each other, leaving a solid block of notes for a full impact.

The other big challenge for this album was a technological one. While I see in the credits a recording studio and an individual responsible for mixing and mastering, I have many thoughts on credentials and credibility. The first thought I have is that this album is "live", where all members are in the same room together and each track is recorded in one take. However, this album doesn't sound live. These tracks simply refuse to lock in, with entrances and exits all over the place. There is a systemic failure to balance the voices, leaving some parts underrepresented and others overpowering. And one of the worst sins of all is committed, as there are times the solo can't be heard because the group sound fails to acknowledge the soloist's existence. For as much money as a studio costs, it seems like the group would have benefited more from simply sitting in a room together with a camera and recording videos to put on the internet.

I write all this as a critique, but there is a silver lining in the final two tracks, Take a Moment (to look at the sky) and We'll Be Alright. For every earmark that makes the first nine tracks problematic, I can tell instantly that these tracks were recorded live. Many of the major flaws immediately disappear. The group is suddenly incredibly attuned to all the other members. The chords suddenly balance so much better. Dynamics take a direction, allowing for crescendos and diminuendos. You can hear the group members breathe together and the entrances and exits align far better. I won't say it's perfect, but it is a tremendous night-and-day difference between the first nine tracks and the last two. I can hear elements of past tracks mirrored in these two tracks, and suddenly those compositional experiments play out so much better. I could spend paragraphs writing about how to make the first nine tracks better, but I don't have to: the group figured it out by the end of Finding Connection. The next steps would be to build on the successful moments, making dynamic differences bigger, live balancing better, and keeping the sound energized.

The earmark of all great music is that it makes you think. As I think back on the duality of the songs of this album, I wonder if the composer was writing a game of chess while I was thinking about checkers. This album talks about social connection in a digital age. If we only look at screens and consider that as "being social", we assume it's normal and accept it at face value. I considered the first nine tracks as "normal". However, when we truly are social, the impact of being together is staggering, as demonstrated in the last two tracks. This album highlights music and life as a social activity, claiming that while we can be musical individually, being musically socially has so much more beauty. If that's what Alexander Frank was going for when he wrote all this, he hit it right on the nose and I can't wait to see what he writes next. If I'm grasping at straws here, it gives the group an easy path forward for the next time. Understanding the differences in the final two tracks may be the key to creating more beautiful music as a group.

The album can be downloaded free from Bandcamp. A fully-staged, dramatic intepretation is also available on YouTube.