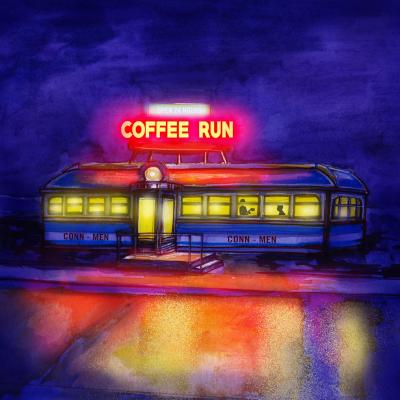 Coffee Run is a perfect representation of being a "little bit of everything". There's a good mix of current and classic, positive and melancholy. There's tracks to sit back and relax with, or jump up and dance. The Conn-Men do a lot of things well on this album, and it's overall a wonderful work to listen to. However, there are a few things that prevent me from giving the coveted "5" here.

The first three tracks on the album pack quite the punch, and may be one of the better collections to open an album that I've heard in quite awhile. All three songs deliver on emotion from all voice parts, whether it's just to dance like a maniac in This Life or to reflect on a lost love in Lay Me Down. While all three songs have very strong soloists, Lay Me Down soloists Drew Cietek and Kyle Smith's voices complement each other incredibly well, not to mention their beautiful blend when the two come together. I'm not sure which one of them has the riff/run around the 4:10 mark, but that is tastefully done and puts a nice little bow on the whole three-song set. I am also very impressed with Nicholas Guarna's approach to the solo on Unchained Melody. Whether it is due to limitations in his vocal range or just a conscious choice to change the line a little bit, Guarna avoids trying to squeeze out some of the higher notes, such as the "need" in the final chorus, instead holding out the "I" right before it. These changes added something different to a song that has seemingly been covered by everyone, and I think his changes are both interesting and fit the song really well.

Unchained Melody also gives us a good opportunity to talk about areas of improvement, as background dynamics are notably absent in some tracks. With this track, there isn't too much of a contrast between the beginning and the end, and I would like to hear a gradual crescendo to the forte that the group ultimately ends up at on the final chorus. On the high energy songs (i.e. This Life or Sister Golden Hair), you can get away with less of a dynamic contrast as the goal is to get you to sing along and dance. But, where there is more of an emotional connection —  Unchained Melody or Colder Weather —  the dynamics play a huge role in telling the story, and it's therefore important that attention is paid to them both in the arrangement and the recording studio.

Moving on to House of the Rising Sun, I come to a note that I don't think that I have ever addressed in a review, and I will admit that it is incredibly nitpicky. Tim Watson delivers a fantastic solo line on this track, displaying an incredible low register at the beginning and end that rumbles through one's core. The one point that I want to make, however, is on the pronunciation of the city "New Orleans". The name appears at least four times, and Watson pronounces it at least two different ways — I picked up on "New Or-lee-ans" (breaking up "Orleans" into three syllables) and "New Or-lens" (two syllables). For me, it doesn't matter which one is chosen, but I think one needs to be chosen with and stuck to. Otherwise, it comes across that multiple places are being talked about. Obviously, House of the Rising Sun is a very well-known track and there shouldn't be much confusion as to the location being referenced here, but it is something to think about on a broad level. This comparison is a bit of a stretch, but it's similar to having multiple people singing the same vowel (be it part of an actual word or just a background vocal); you want everyone to have the same mouth shape. If one is singing with a very tall "oh" vowel, and the person next to them is singing more of an "ooh", that will clash and it's not going to sound correct to the listener. It all comes down to a level of consistency — if you pronounce a word one way at the start, changing it halfway through can be somewhat puzzling to the listener.

I'll be waiting for the Conn-Men's next release with eager anticipation, as I think that these guys have incredible talent and have demonstrated this with a great album in Coffee Run. If they challenge themselves to work on the dynamic arcs of each song, they could be very well on their way to a "5" rating from me.

Coffee Run is well-executed simplicity that is pleasing to the ear, but the lack of impact across the album limits the overall value of the recording.

Let's start at the top. This Life is a fun opening statement. From the beginning, the Conn-Men establish themselves as easy, accessible listening. There are recurring rhythms and chords that act as a little earworm to tie the whole piece together. Arrangers Anders Waldo and Noah Frank penned a piece that uses simple chords but can still keep the listener engaged and interested. This is continued into Cough Syrup, where the same overall bounciness of the sound bleeds through the speakers. These are easily the kind of pieces that I could listen to while walking down the street and watching the world go by.

This simplicity is both a blessing and a curse; by the time we get to Chivalry Is Dead, some of the initial charm of the sound has worn off. There is a heavy reliance on the syllable "daht" throughout the piece. This syllable is by nature a bit piercing and has a separated sound. There is no flow between the phrases simply based on the syllables being used; there are gaps in the sound that are simply not being filled. This is overcorrected in pieces like Unchained Melody, where there is suddenly almost too much flow. The number becomes too close to the original because the piece is so focused on Nicholas Guarna trying to croon that micro-dynamic changes and any potential impact is avoided in the process.

There is an aversion to arranging creativity through the middle of the album that makes much of this portion a challenge for the listener to remain engaged. This is salvaged by the end of Coffee Run. House of the Rising Sun is my favorite track on this release, as it begins to finally utilize many of the elements that the album has been missing. The track is no longer monochromatic, utilizing both driving rhythms when necessary and a handful of colorful chords to fill the gaps in sound. This is highlighted by soloist Tim Watson, who grabs your attention with a gloriously dark and haunting bass vocal opening. This is the sound that I would love to hear more of from the Conn-Men — it keeps me engaged as a listener while playing to the strengths of the group. By finding even more ways to drive the overall story arc of the piece and really let the soloist fully deliver, the group's sound could be something that stops being easy listening and becomes something that demands attention.

By the time Coffee Run ends, it's hard to remember everything that's been heard. There is nothing that sticks out as blatantly bad, but very little that makes me want to play the album again. The biggest challenge for the group is going to be a diminished reliance on the original material; the human voice can mimic many sounds, but not all. It falls on the group to embellish the sounds it can and replace those it can't. By finding that balance, the group could become one that I want to put in my headphones while going on a coffee run myself.

Every a cappella group has strengths to showcase and flaws to hide. For the Conn-Men, the group's newest album, Coffee Run, unfortunately puts both on display and the weaknesses too often overshadow really wonderful music-making.

Some groups have certain genres on which they sound best. The Conn-Men gravitate toward songs inflected by doo-wop or rock. Few other groups today could successfully cover The Righteous Brothers' Unchained Melody. Small details like their vocable choices and soloist Nicholas Guarna's vibrato speed help their throwback to stick the landing. Tucker Rathe's soft but energetic solo, spot-on vp stylings from Collin Davis, and arranger Anders Waldo's subtle playfulness power their version of the folk-rock anthem Sister Golden Hair. The Conn-Men also bring to life more recent songs like This Life, Cough Syrup, and Best Friend with similar attention to musical details like dynamic swells and crisp cutoffs as well as earnest solos from Andrew DeBenedictis, Noah Frank, and Kyle Smith, respectively.

In contrast, songs outside of those genres feel incompatible with the group's sound, most often because they fail to capture the groove and emotion of the tracks. Lay Me Down sounds square because the group adheres too rigidly to a click track, unwilling to inject some rubato into what should be a sensuous pop ballad. Though the duet between Drew Cietek and Kyle Smith produces lovely harmonies, they focus too much on executing riffs and not enough on conveying emotion. Colder Weather also feels stifled: the uncharacteristically robotic background voices could use more accents and less tenuto to give their lines some shape and forward motion. Percussionist Kyle Smith's groove emphasizes all four beats rather than a half-time feel, and slows down the tempo to a slog while overpowering everything besides the soloist in volume and quantity of sounds made. The song, in which the soloist narrates a tale of lost love, feels somehow devoid of storytelling.

Coffee Run's structure also hinders the record from sounding its best. Too often, similar-sounding tracks are placed in succession. Mid-tempo tracks like Sister Golden Hair and Best Friend feel refreshing after the two slow songs that precede each. The album opens with two rhythmic covers of alternative bands that, while sung at different tempos, bleed into each other. Reordering Cough Syrup and other tracks would help differentiate the songs and break up the excess of ballads.

Moreover, arrangements such as the choral Can't Help Falling in Love and the tired-sounding House of the Rising Sun remain static: after the first minute, you know how the rest of the track will unfold. The jazzy Chivalry Is Dead sounds almost whimsical, but an avalanche of the vocable "dat" overwhelms a buoyant solo from Benjamin Rutherford. Thankfully, Noah Frank breaks the album out of this rut with his arrangement of Best Friend. The chart keeps the listener's interest piqued as the texture freely grows and unwinds, which allows the group's strong blend and musicality to take centerstage to close Coffee Run.