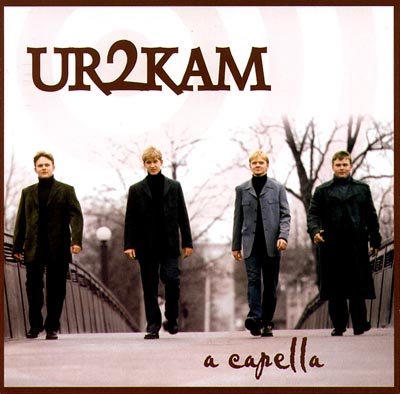 UR2KAM's a capella is not a good album. Two brothers and their schoolmates have combined their voices in the barbershop tradition (bass, baritone, tenors II and I) with distinctly awkward results. More than anything else, the singers sound uncomfortable throughout.

I do like the richness the four are able to achieve. This richness is at times aided by overdubbing, but too often hobbled by the same: the studio work is not any good. Because of these two problems, the group is at its best when singing homophony — K-K-K-Katy isn't bad, nor is Good Night. Polyphony trips them up: Hooked on a Feeling just isn't any good at all.

All told, I can't recommend a capella for purchase. With one or two exceptions, there isn't a track I would listen to again. The American covers can be found better done elsewhere, while the Estonian-language tracks suffer from the problems evident throughout. Take a pass on a capella.

I must say that I was surprised to receive a package from Estonia the other day, since I wasn't expecting any packages from overseas and I don't know anyone who lives in Estonia. Truth be told, I was a little hesitant to open the small, padded envelope when it came, fearing what biological hazard might lurk inside. Luckily, it was only a CD to review from the Estonian quartet UR2KAM.

The album starts out with a fairly useless track that sounds like someone tuning a radio with UR2KAM on one of the stations. Intro tracks and hidden-tracks are features of a cappella CDs that are usually neither funny nor interesting. The next aspect of this recording that jumps out at me, especially being an American reviewer, is the singers' accents when singing in English. On the English songs (tracks 2-7 and 11-13), the singers' accents were fairly apparent. It's not unlike listening to The King's Singers' pop recordings. The accent is most noticeable on Sloop John B. You've got to hand it to them for trying though.

My favorite tracks are the ones sung in the group's native tongue. The quartet's tuning and blend are generally good but far from perfect. I hear many pitch problems. I also noted a bunch of mixing problems (voices standing out that really shouldn't stand out).

Overall, this is an interesting recording to listen to. I rarely get to hear a cappella from countries outside the US, and I've never heard of any groups coming from Estonia. In that respect, it was a treat to listen to. When compared to a cappella recordings that are common today in the USA, this recording still falls short of greatness.

UR2KAM is a barbershop quartet from Estonia. Their album is a mix of standard barbershop, pop, and Estonian songs.

The group stays very true to traditional barbershop, and does it quite well. They have nice blend and pitch. Every arrangement is for four voices and could be performed live. It is a refreshing change from the double-tracked, 40-part songs pumped out by top collegiate and professional groups.

Unfortunately, the multi-tracking method is important and necessary for more complex songs. UR2KAM's Hooked on a Feeling reflects this weakness. One voice says "ooga shacka" the entire time and the song is reduced to two parts and a solo.

Their strongest songs are the ones in the language most comfortable to the group. Paula, sul on poisipea was my favorite track. It was cute and energetic. All the Estonian songs had an intensity or sense of fun that was lacking in the other tracks on the album.

A bit more cleanliness on the cut-offs, and more attention to vowel sound matching would have moved this album up a notch. In my opinion, UR2KAM would be better served putting out an album entirely made up of Estonian music. That would be a unique and interesting album to own.