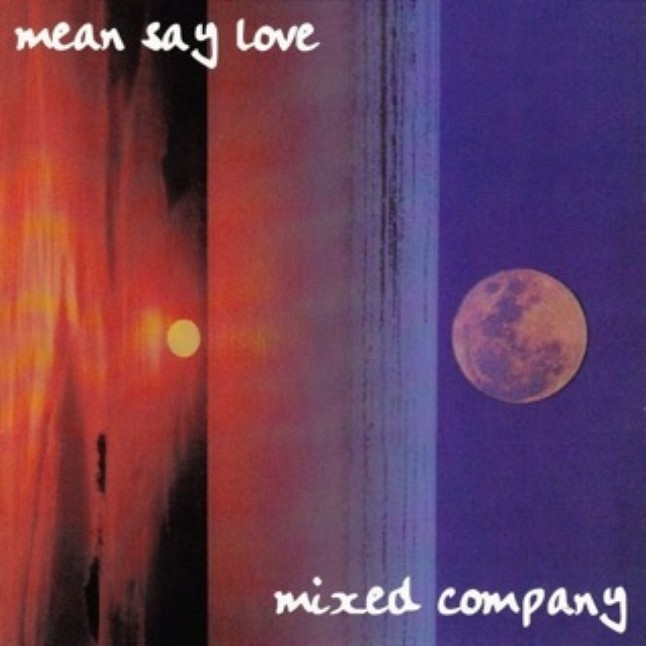 A competent yet not particularly original group, the Mixed Company sound like The Amalgamates — both coed groups with strong voices and relatively good arrangements who produce the hell out of themselves to try to sound more like the trendy music which is all they do. But while the 'Mates get credit for at least doing some lesser known songs, almost every single song choice on this album is utterly predictable — either a recent Top 40 single or an 80's song that everyone knows (and every group sings). They don't even make the oh-so-daring move of having a woman sing a song sung by a man, or vice versa. Many of them also extend the philosophy that is the musical equivalent of photorealism by doing the full length of the song without varying the arrangement in the slightest. This works fine in regular genres of music, but for a cappella it gets old. Fast. On some of them they start to get inventive towards the end, but it's too little too late to really count as putting your own stamp on the song. If I want to listen to an exact copy of the original, I'll listen to the original (or not, since they're all so overplayed). If I want to hear something a little more exciting in a cappella, I'll turn elsewhere. That said, this is far from a bad album. I've just heard far too many like it to be able to jump up and down anymore.
Rating: 6 (5.7)

I've only recommended two RARB albums to date. I'd like to add this to the list. Mean Say Love, although it has a few dud tracks, is a fairly consistent co-ed disk from a group with a full, healthy sound. What's keeps this album from being GREAT is that you never get the sense that the group is having any fun. (I'm not saying every album has to be tongue in cheek. "Flail" was deadly serious, but its arrangements were on a level all to themselves and the lead vocals were consistently top notch. This album can't say that.) The seriousness kills tracks like the early 80's classic "Tainted Love". What you will get, in exchange for that shortcoming, is the ambitious "Techno Medley", which is seven minutes of almost faultless a cappella dance music. (You heard me right — dance music.) Throw in the best versions I've heard of the compulsory "Interstate Love Song", "Possession" and "Why Should I Cry For You" and you've got a pretty good bang for your a cappella buck.
Rating: 8 (7.2)

It is rare that I truly can say that I enjoyed listening to an entire album by a collegiate a cappella group. Am I alone in that? Maybe. But I enjoyed listening to mean say love. Maybe we're on the road to better times. Maybe I'm just a lucky guy. I believe neither of these things to be true. However, I can say in all candidness that I was truly impressed by this album from Mixed Company. The song selection is at the same time fun, brooding, current, retro, dance, alternative (whatever that means), grunge. Taken as a whole it is as high quality as I've ever heard a college group achieve. The production value is excellent; the arrangements are wonderful, clean, and uncluttered; the soloists are very good; uh, wait, what else is there... Oh yeah, there's percussion everywhere, and pretty good percussion at that. Ok. Now what else. Nothing. The album is great. Highly highly recommend.
Rating: 9 (7.4)

This is high quality college a cappella. It's that simple. This album from Mixed Company features complex and well-executed arrangements, many talented and confident performers, and excellent vocal percussion. One listen to the wonderful group blend and even balance of parts on this album proves that a team effort really makes the difference. From the beautiful "Possession" to the groovy "The Sign" to the poignant "You Oughta Know" to favorites from the 80's and current pop, the quality delivered by this group is consistently good, song after song, and this is a great album for any a cappella collection.
Rating: 9 (7.5)

Consistency is the name of the game in "Mean Say Love", the latest release from Stanford Mixed Company. Overall it's pretty okay, with decent pitch, nice percussion, and the same vocal strengths and weaknesses regardless of who is singing what. Dynamics are particularly good for a college group in the studio.

Unfortunately, they don't manage to avoid the bete noire of the studio environment — they distinctly lack energy, zip and passion throughout most of the songs. There are one or two cases where I attribute this to conscious choice (the light prettiness of "No More I Love You's") but mostly it's a fault. Other weak parts are a preponderance of Chris DeBurgh-like solos (fill in the almost passionate, almost in tune Englishman of your choice if you don't remember "The Lady in Red") and a couple of arranging gaffes. The scat theme in "The Sign" was a very, very bad idea, and "dun" is just not in vogue as much as they would have you think.

Ah, but there are some benefits, too, things that stand out in my head even after I've put the album away. Some power-packed female chords amidst the chaotic barrage of "Interstate Love Song". Some wonderful swelling chords and backing vocals lurking in most of the songs. The occasional bass presence, and the uncomplicated but very effective bass drum/hi-hat percussion. And there is "Satellite".

This cut is worth the price of admission, especially since there's nothing here that will make you run screaming in agony, just some less remarkable repertoire. Read my song credits and see me rave some more. At least about this song. And hey, before you go, you might also congratulate me for not making any — that's right, not one — overt California jokes. There was potential, but I honestly think this group deserves better than that. A nice thing, that surprises me somewhat but rings true in my head as I think it over. Like Satellite.
Rating: 6 (6.3)