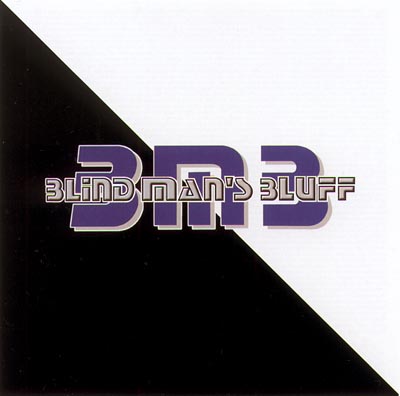 Blind Man's Bluff's self-titled release is disappointing on several levels. Outside of the abundance of originals, deft tuning and crisp, fluid percussion, the album comes across above all else as noisy.

The arrangements are partly to blame. For the most part, they are rhythmically and harmonically complex, with single voices on individual repeated lines beneath and around the soloist. This could be fine, but syllable choice and tone conspire against blend, producing cacophony. Many tracks avoid traditional verse-chorus structure, thus giving the listener (a) no chance to fall into a true tonal center and (b) no reprieve from continuous melody. The result is that the arrangements are unsatisfying; the songs don't seem to cohere.

The lyrics, included in complete if not always correct form in the liner notes, are another culprit. Most of the writing behind these tracks is strained and affected, like early House Jacks with more references to pop culture and privileged urban life. Rhyme is often avoided, for no apparent reason, where it might have held verses together against differently-structured bridges and refrains. Some phrases are mind-boggling: Feel includes the the particularly awful "Inflicting my predator glance/On the target of my petting zoo dance". Other songs are just as bad; a recurring trope is the rehashing of semi-successful relationships as if by snide, indecisive literati. The effect is annoying.

The recording itself also hinders. The sound is fairly uniform across the tracks: tinny, reverberated, and distant. Sibilants sound high, while warmth and humanity have been turned way down. The overall effect, again, is off-putting. The album is a chore to listen to.

Lastly, the voices themselves are sometimes responsible for the album's noisiness. As mentioned above, blend can be an issue. Different parts sound as if they have been reverbed differently, and within voices different parts of the range have substantially different sounds. The tenors, especially, have sweet, almost uncertain high voices (crystal high notes on the hidden anthem excepted) but poppy, more nasal chest voices. Worst are the soloists. They are not powerful, and in their nasalized poppiness more off-putting than compelling.

All of this is a disappointment and a shame. BMB has been electric to see onstage, with percussionist Paul Donnelly in particular standing out among the best in the business. This recording is no better than average, and I believe it shows the five men of BMB far from their best.

Blind Man's Bluff comes back to the a cappella world (at least briefly) with this half-studio, half-live compilation album. This was my first exposure to Blind Man's Bluff other than hearing the name around the a cappella community over the past few years. I had no idea what to expect prior to listening to this album. No expectations and no past prejudice or bias whatsoever. Let's dig in and see where this album takes us.

BMB used the studio on this album in ways that enhanced their sound rather than distracting the listener from it. Many groups before (and inevitably after them) can't seem to find the studio balance that BMB seemed to create without much effort at all. Superb vocals lead this album into greatness, not flashy studio work.

I was disappointed with the soloists on this project. They were all okay. Nobody really came across to me as a first-class soloist, and this left me feeling a little empty about the project. I kept thinking about how much this group could accomplish if they just added a soloist or two. Scary.

The highlight for me on this album was the vocal percussion. The percussionist captures his own style on every track without trying to be someone else. This was very refreshing for me since most VPs these days tend to mimic rather than create.

BMB offers up some of the best original songwriting that I've heard to date from a professional a cappella group. It's a shame they didn't give credit to any of the songwriters on the originals (or anyone else for that matter) in the liner notes. My favorite original songs on this album were Red Line, Slightly Crazy, and My One Addiction.

A superb album and a major highlight to add to your a cappella music collection.

BMB makes me wish I'd had the chance to see Blind Man's Bluff live before the group broke up in 2001. After checking out studio-mixed BMB, I'm left with the feeling that they sounded best live, as on their debut album, Jaunce.

Half of the tracks on BMB were recorded live, but all were mixed in a studio. Unfortunately, the album puts too much emphasis on effects, rather than just using them to flavor the vocals. As a result, some songs feel forced and get hard on the ears.

The biggest culprits are Dirty World and Feel. The flange effect in the intro of Dirty World is totally cool until about halfway through the first verse, when some seriously distorted background vocals and percussion join the mix. The song gets too busy, crowding out the soloist. The unidentifiable effect on the background vocals of Feel likewise gets pretty annoying by the second verse. Overemphasized processing rips the ear away from a heartfelt solo performance.

Furthermore, the problem gets worse when you combine it with Blind Man's Bluff's bright and high-pitched group sound. The soloists are all tenors, and their arrangements split the vocals into really high and really low, with very little midrange in between. Also, the guys like to sing bright syllables (Red Line; Why Didn't You Call Me) or syllables that mimic the last word in the solo (Slightly Crazy; I Don't Like). That's definitely exciting and fun to hear, but combined with hard-edged effects, BMB becomes one of those albums that I can't listen to for very long.

Presentation and production aside, BMB is a musically solid album. Nine of eleven songs are originals, and most of the songs have a unique, likable and catchy sound. The tunes build to good rocky crescendos, and the endings, often abrupt, left me hanging in a good way. The lyrics felt real and legit, and the live recorded solos were heartfelt and energetic. Ironically, I liked every bridge on the album, often more than the rest of the song. Paul Donnelley is amazing — his percussion is rhythmically and sonically consistent yet still human, and I've never heard anything like his drum rolls. He and bass Adam slam out solid jams that give each song a unique feel and drive verses into exciting choruses.

BMB has good songwriting, a unique sound, and high energy. It's just not presented well. I think Blind Man's Bluff was seduced by the power of the studio and lost the freshness and energy that made live tunes like Semi-Charmed Life and Dirty World my favorites from Jaunce. It's too late to see Blind Man's Bluff live, but if you want to check out the group at its peak, pick up a copy of Jaunce.

BMB is $10 plus $2 S/H. Get a free copy of Jaunce with your order of BMB while supplies last. You can order online with MC/Visa from the group's web site, or send a check and your name, address, email, and phone number to: