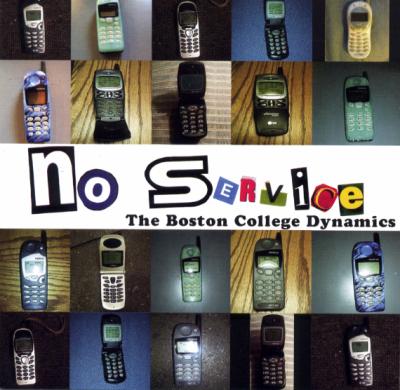 I was sitting on my couch, listening to this album, sucking on a Tootsie Pop, trying to find the words that best describe this album. Here are just a few that I came up with: drab, lackluster, boring, monotonous, insipid, and humdrum. Yeah ... humdrum ... that's it.

While we're on a word kick, maybe The Dynamics should consider words like these for the next time they record: creativity, energy, interpretation, style, intonation, blend, and (I truly hope I'm not the only one who gets the humor in this one) dynamics. Isn't it ironic? Don't you think?

I was generally disappointed with this album. I'm sure The Dynamics are a fun group to be a part of, and probably even a blast to see in concert, but they still need to progress forward with their recordings to become more than just a regular collegiate a cappella group. The only track that I truly enjoyed on this album was Champagne High, and against other tracks from other groups, this one is still just barely above average.

Soloists were particularly weak. With better soloists, this would have been a drastically better album. The old adage about soloists being able to turn a good track into a bad track by themselves holds true again. The only soloist that didn't give me any cringe moments was Chris Kim singing Champagne High. That said, every soloist (Chris included) was mixed entirely too far back in the song, making it extremely difficult to hear the lead clearly throughout the track. (A blessing perhaps?)

The arrangements on this album were consistently on the solid side of the fence (well, at least the ones arranged by Dan Burns), which leads me to believe that it was the execution and not the writing that adversely affected this album. What can I say? Practice, practice, practice, and then when you're tired, your throat hurts, and you're sick of the people around you ... suck it up and practice some more. Groups don't always realize how much rehearsal time is needed in preparation for recording a track. The studio can't fix everything, and the microphones don't lie.

I will say, there were moments when this grouped showed some serious potential. If you can listen to the tracks while blocking out the soloists, you will hear some very cool things happening back there. The arrangements by Dan Burns, with well-chosen vowels, were at times, moving things in a positive direction. But God, the soloists. Ugh.

Okay, so there it is. Not an album I'd buy, unless you're sleeping with one of the members (or created one of the members by partaking in the aforementioned activity). Go see these guys in concert. I bet they put on a fun show to watch. And who knows, maybe the next album will be the one that really breaks this group into the top tier of East Coast collegiate a cappella groups.

Ouch. Very few of the albums I have received deserved a rating of two. This is one of those albums. The Boston College Dynamics deserve an "A" for effort on No Service. Effort is something that should be applauded. There is little else on this painful album that can be. The cover of No Service features photos of cellular phones, ostensibly receiving no service. During some parts of this album, I wished that my CD player would get no service.

Pitch and blend necessary for good a cappella. There are grating clashes in pitch on every song on this album, sometimes throughout the entire song (harmony on Sometimes Love Just Ain't Enough and Crash and Burn; everything — especially the solo — on Wishin' I Was There). The blend is practically non-existent. The ladies have warbling choral tones; the guys have a raw sound. For the most part, the soloists have little control over their voices, and the solos falter in pitch and crack in falsetto.

The arrangements aren't half bad. There is rather annoying repetition for the ladies during a few of them ("On the outside, I'm on the outside" for about a minute, and that weird nasal talking thing in chorus of In the End). The percussion is pretty decent. The album does get better as it progresses (most of the stinkers are in the first half), but still doesn't rise to the level of good.

To The Dynamics: In the future, I suggest you focus on the basics (pitch, blend, rhythm), cut down on tracks (fifteen's a lot), and perfect the songs you plan to record before hitting the studio. If possible, record on Pro-Tools. You can put each singer on his/her own track, so you can drop out those folks who are always off pitch and not blending without hurting their feelings. While waiting for those folks to graduate, don't compound the problem by taking in sub-par singers to maintain group size.

For potential buyers: There were moments and glimpses of The Dynamics' potential. I enjoyed their song choices. Chris Kim turned in a good solo on Champagne High, as did Kati MacGregor on Hit 'Em Up Style and the soloists on In the End. But those things are not enough to make this album worthy of purchase.

I'm not as familiar with the general body of collegiate a cappella recordings as I should be. I haven't been around it or listened to it in ten years. But knowing how much work goes into releasing any album I've been surprised by the explosion in recording projects from the college ranks. It's a wonderful thing.

Recording any album takes a tremendous amount of time and effort. Effort counts, but in the unforgiving medium of recorded music, experience often matters more. The problems with the disc as a whole are typical of newcomers to the studio. My immediate impression was one of a group stretched thin trying to meet deadlines and budget. No Service could have been three or four songs shorter, focusing more on quality rather than quantity. Pitch irregularities are common enough to be distracting. And the rhythmic problems are a classic example of studio inexperience. These issues stick out even more given the lack of intensity and chutzpah behind the sound. Finer attention to accuracy and greater emotional investment are a must.

The Dynamics hold together a diverse repertoire fairly well. After my first listen, I had one word branded on my forehead: "Doh". This is not a Homer Simpson reference. It is the syllable of choice for backing vocals, clearly featured on all but one track. It wouldn't be my first choice, and probably goes too far in its prominence, but it creates a reasonable continuity and consistent sound from start to finish. This is no small feat. The arrangers, especially Dan Burns, deserve credit for accomplishing this unity and avoiding the pitfalls of a disjointed, ragged album.

Production quality on No Service leaves a great deal to be desired. The consistency created in the arrangements is not served well by the distracting, unbalanced, inconsistent mixes or the distortion which is evident on at least three songs.

Special mention goes to two soloists: Matt Fitzpatrick and Kati MacGregor. Mr. Fitzpatrick does a wonderful job of creating an amusing and accurate caricature, intentional or not, of the boy band sound on It's Gonna Be Me. And Ms. MacGregor is one to watch. She's got a confident and powerful presence already, showcased on the album's best track, Hit 'Em Up Style. Look for her to tear it up on future Dynamics albums.

I'm sure the Dynamics put in tremendous effort on this recording. But it lacks the polish and experience good recordings require.

Available from the group's web site, or by sending a check for $15 to