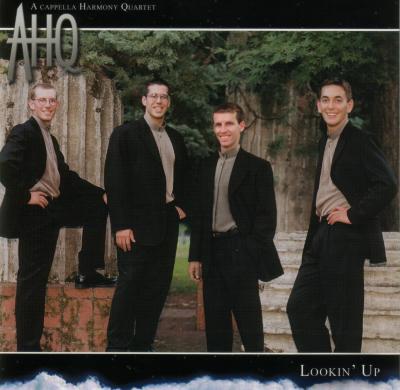 AHQ's newest album, Lookin' Up, is a collection of Christian music sung by four very genuine young men. Their love for God and music is very evident across the project, and the average listener will not be disappointed with this release.

I have to say the average listener, because I for one was disappointed. These guys have been together now for 7+ years now and they still fight the blending issues that plenty of groups half their age have mastered. Tenor lines that ride and roll, hide and show, release and get caught ... all should be seamless, but alas are not. The bass seems unsure of himself at times, forcing his sound to try to lead the blend instead of putting himself at the bottom of it. These are age-old lessons that this group has yet to learn, and will need to, if they want to progress forward musically.

Now, by saying that the average listener will not be disappointed with this release, I'm implying that this is a pretty good album. It is. The emotion behind the music is there, the arrangements are all well constructed, and they do succeed with a musical vice of many other groups: dynamics. If you can enjoy an album just for the music being sung, this might be a pretty good album for you.

Of course, there are many other shortcomings on this album that, in my opinion, could use some attention before they record again. First, basic entrances and exits were not together, forcing unwanted tempo changes in the songs. Pitch and intonation came and went, and could be much tighter on future albums. And finally, I felt the repertoire was a little on the weak side. Not many of the songs really made me feel spiritually inspired, or uplifted.

All of the problems mentioned in this review (except track selection) can easily be corrected by spending the money to record and mix with a ProTools engineer. Even if you can't perfect your voice, they can.

As I said in my opening, it's not a bad album for the average listener. I'd just like to see them push it farther to see what they can accomplish.

Don't let the fair-to-middling scores fool you. If you're in the market for some Christian barbershop, AHQ's Lookin' Up is a good pick.

There's a lot to criticize here. AHQ's tuning and blend are good enough for energetic, up-tempo numbers, but don't offer the kind of ethereal perfection that makes a sedate hymn glow. In slow-moving arrangements, it's often easy to pick out the timbres of the individual voices (one nasal, one sharper, etc.), as well as moments of individual shakiness. These guys are just a little too square to pull off a gospel number like Go Tell It on the Mountain. Many enjoyable tracks are marred by a nagging error, such as a held high note that's just a hair flat (In That Great Gettin' Up Morning). Also, the album is almost entirely covers; I wish composers Bryan Smucker and Tom Troyer had contributed more than one original track.

Despite all this, I'm a fan. AHQ's technique is good, but their honesty is special. Every word seems heartfelt, and that's why these earnest lyrics don't cloy. As an agnostic Jew (I don't sleep through church; I sleep through temple), I think it's fair to say that AHQ didn't record this album with me in mind. Even so, I'm moved by their heartfelt presentation. When I heard AHQ sing "Get out of the boat and into the water!", I was ready to grab some flippers and take the plunge. I expect that fans of this genre will want to dive in, too.

A Cappella Harmony Quartet, a Christian barbershop/gospel foursome from Oregon, can be summed up in one word: square. Half of Lookin' Up consists of hopelessly lame proclamations of personal faith (the title track, Tracing God's Hands; Trusting in a God Who Cares) with facile melodies and cheesy lyrics (example: "If life was just the paper / And I could hold the pen / I would draw a pretty picture / Sign my name at the end"). The other half consists of classic spiritual and gospel arrangements, written by the legendary likes of Moses Hogan (Deep River) and Roger Payne (Go Tell It on the Mountain), that AHQ utterly slaughters.

Sad to say, this disc is completely devoid of soul and expression. Rather than give their phrases shape, AHQ sings each note at exactly the same volume and intensity and squares off the rhythms to the point of sounding robotic.

Tuning is mostly OK, but the nature of the quartet format is that even the slightest imperfection turns the entire song into a train wreck. Quiet Place is the worst offender, and on no song is the final chord sufficiently in tune to create those gorgeous ringing overtones that are required in this kind of music. Blend is awful, with matched vowels scarce to be found, and it's not helped by the fact that Konrad Krabill, ostensibly the group's bass, has to resort to vocal fry to hit his low notes.

AHQ's arrangements, those not borrowed from the masters, are weak. The most consistent trap into which they fall is not leaving enough space between the bass and baritone (most noticeable on the title track), creating a muddy sound. Tom Troyer's arrangement of Over the Moon inexplicably leaves out the third from most of the chords, making the song sound, well, bizarre and wrong.

Soloists (each member is given the chance to shine) are a mixed bag. Tenor Bryan Smucker and lead Troyer have lovely voices. The Krabill brothers, Konrad and baritone David, do not. If there's a gene for inability to produce vibrato, it runs rampant through the Krabill family.

In short, Lookin' Up is strictly for friends and family of the group. While AHQ is to be commended for its earnestness, and this album does have its moments, it's a pretty painful listen on the whole.