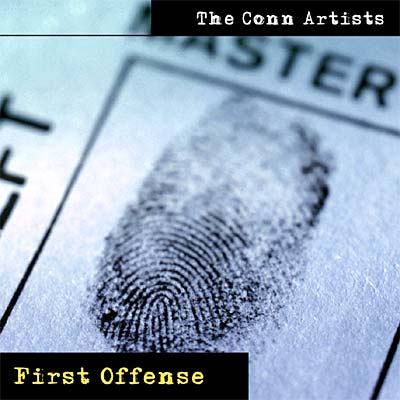 The Conn Artists' First Offense is a throwback to a simpler day in a cappella. These seven well-post-college guys deliver a jazzy, snap-along energy. The recording is like the Brechtian stage: raw and exposed, yet intellectual and complex. It's not that these guys are particularly soulful or gritty; they're not. But they're authentic, and their enjoyment of the music overcomes their less-than-professional sound.

First Offense sounds like few contemporary a cappella releases. In fact, that's the key here: it's not contemporary at all. The bass isn't boomy, the effects are nearly non-existent, there's no perceivable multing, doubling, sweetening, delays, pitch correction, or even board-mixed dynamics. It sounds like every song was a live, stereo one-take by a well-rehearsed group.

The Conn Artists are, in reality, a small glee club. The songs are consistent, the tone lightly covered, and the blend heady. And though the CD is about average in what it achieves, what it aims to achieve is considerably more difficult than most of today's a cappella. I'm looking forward to a recording where the Conn Artists "do their time" in the recording studio, and not just the rehearsal room.

If you're a good recreational singer, and you had a reunion with some of your singing buddies from your collegiate days (the good ones), you'd probably sound a lot like First Offense, the debut CD from the appropriately-named Connecticut-based septet The Conn Artists.

Here are the ingredients: seven guys, all of whom can sing but none who display any true virtuosity in their respective solos; a good, if not rock-solid, blend; a generally consistent feel for rhythm and intonation, but not without wandering notes and wavering beats; and a tendency towards a diversity of repertoire that is perhaps too diverse. For these and other reasons, it might be most expedient to label The Conn Artists as amateurs, but that would be doing them a disservice. Though they lack the spit and polish of a crisper, tighter ensemble, their music is admirably rendered and perfectly pleasant to the ear. "Novices" might be a better term, especially since it applies to some of the creative choices made on this, their first album.

If you're the purest of the purists, you'll love the seemingly naked sound. But honestly, a touch of reverb and some possible pitch correction now and again notwithstanding, the "living room" quality sound of this album can be both a blessing and a curse. Sure, it's nice to know that you're hearing the guys as they actually sound, but just a smidge more processing, some digital editing (breath control issues are far more audible than they should be), and maybe a few windscreens would have edged these gentlemen closer to the "pro" sound to which so many groups aspire.

There's also a looseness in the performances, especially in complex rhythm sections, that has me wondering whether more rehearsal is in order or if the musical director needs to be a bit more exacting. Chordally speaking, these guys have a nice blend, and they beautifully execute some wonderfully colorful chords at times. But in the trickier passages, the lack of unanimity in rhythm becomes noticeable. Similarly, soloists are allowed to be a bit lax occasionally with their attempts at embellishment, and the tenors' intonation wobbles a bit as they are pushed to the limits of their high register.

The Conn Artists would also do well to narrow their repertoire. The album starts rather slowly with a series of songs that cast the group alternately as a vocal jazz ensemble, a street corner doo-wop group, a comedy troupe, and an R&B/soul septet — and the fact that none of the first few tracks are terribly distinguished is proof positive that you can't be everything at once. In fact, the album really only hits its stride about halfway through with Blue World, which allows these guys to do what they do best: unison singing in close harmony. This talent is showcased again in Winter's Night. The more straight-ahead jazz numbers are the second-best material on this album; Moondance, On the Street Where You Live and Take 5 are fun if not thrilling. Although they have a tendency to become a bit "range-y" (especially on the high end), they have an energy about them that makes them most enjoyable. Least successful are the doo-wop Dream Lover and Worst That Could Happen, a thoroughly lackluster transcription of Ain't No Sunshine from (a poor opening choice), and a wholly out-of-place Ave Maria.

Frankly, unless you know these guys, you don't need this album. Virtually all of the material has been recorded in better performances and with better arrangements by others. But as debut CDs go, it's not bad, and it certainly should be an effective marketing tool for the group as they continue gigging in and around Connecticut. With a little more precision and a better engineer/producer/studio combination, these guys could really go somewhere.

Since this is only The Conn Artists' First Offense, I guess I should go easy on them. Nah.

A lot of groups I know have two sets of songs in their repertoire. The first is their "fun" set consisting of relatively current songs, targeted to a younger audience. The second is a "backup" set used in situations where the group is performing in front of people who possess a very limited interest in music after 1960 or so.

The Conn Artists track list reminds me of the "backup set" used by my group, Hyannis Sound. Perhaps this is because our group also performed five of the fifteen tracks on First Offense. (Or maybe because the album's opening track, Ain't No Sunshine, was arranged by our founder, Townsend Belisle, but erroneously credited to one of their own members, Charlie Dear. Whatever, I'm over it.) The point is that this album would probably be somewhat enjoyable to someone older than myself by two decades or more.

It's hard to tell exactly when this album was made. If you didn't know it was last year, you probably would have guessed the early '90s. Or more likely, the early '80s. I'm amazed that something so newly-minted can sound so old.

The first issue marring this album is The Conn Artists' embarrassing attempt at vocal jazz. Tracks like Take 5 and Better Than Anything manage to strip swing of two essential elements — namely, an audible walking bass and some semblance of time, or rhythmic pulse. Nary a snap can be heard on these tracks. Further, the goofy scat duet on Take 5 really puts the "offensive" in First Offense. Picture a square in your mind. OK, done.

The Conn Artists lack a noteworthy soloist. I think it's great that the group has a fantastic natural blend, but there's not a big demand for a group consisting only of good backup singers.

Overall, there's nothing on this album you haven't heard done better elsewhere. It's good that The Conn Artists have mastered the basics, but First Offense offers little beyond some well-tuned singing. I hope by their next effort ("Second Offense", maybe?), they will have made strides in dynamics, energy, soloist charisma, and recording quality.