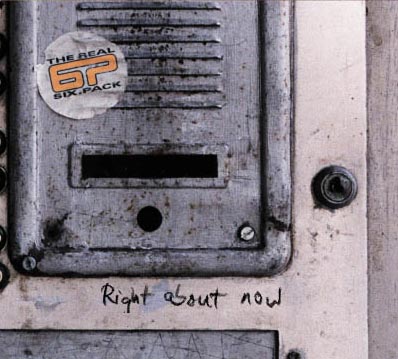 When you first pick it up, The Real Six.Pack's new album looks really slick. Then it starts to get random. By the time it finally makes sense, some of it is at least as cool as you first thought, some of it is lousy, and there are a few odd bits left over.

That describes the packaging for Right About Now, and I think it describes the music, too. This CD is as eclectic as they come, and that's putting it kindly. Disjointed is the word I would use. It opens with this jazzy little doo-wop number, more or less au naturel, then segues into a very heavily produced Styx tribute. Mr. Roboto is better without headphones; it's a nice wall of sound, but up close the pitch is sketchy and the left-right separations are really distracting.

Later on we have a delightful Spanish number, Yo Sin Ti, some generic covers of The Beatles, The Doors and Prince, and then a straight-faced version of That's Amore. Not a single song from German-speaking lands, even though the group is from Munich — go figure. That's Amore is surprisingly charming, thanks to the pleasant baritone solo. He does a lovely, Sinatra-esque turn with a nicely Continental accent on the Italian phrases. Other songs didn't fare so well. In Jingle Bells, every word sounds American except one, but it's a doozy: "horse". With a "z" instead of an "s", the sleigh sounds like it belongs not to Santa, but a lady of the night. Likewise, the title track is derailed at the end by a supporting voice who can't quite manage the "n" in "funk". Too bad — it's otherwise a pretty slick track.

I like the packaging — God, who designed the packaging? It's beautiful and avant garde and I loved the photos. The six bags of trash under the kitchen window is the best, followed by the six black suits in the sunny cornfield, in sharp contrast to the cloudy skies lighting the other photos. But the back cover is a mess, not to mention the most confusing excuse for a track list you'll ever see. It's the first of many clues that this disk is not quite as polished as it wants you to believe.

Aggressive soloists, quirky arrangements, and an eclectic grouping of some of the world's most infamous artists and songs. Where else can you get Mr. Roboto on the same album as charts from Michael Jackson, Sinead O'Connor, and Fatboy Slim?

The Real Six.Pack (RSP) does a fairly nice job with most things a cappella. They sing the nuts off almost every song, and for the most part, they hold it all together. Intonation slips on certain songs (Girl, Nothing Compares 2 U), and blend is very difficult for them, because of their thick German accents on English words. It greatly improved on Yo Sin Ti (a song in Spanish), and was very good on That's Amore and Light My Fire.

I would like to see RSP open up their creative side and produce some original songs on their next album. I'm not really counting Kilroy Was Here as an original song since, well ... it was more of an annoyance than anything else. Original music is where you really hear the heart of the group, and I would take an educated guess that RSP has a really good heart.

This album showcases some very simple production/engineering, but it is still very effective. In RSP's equation: six men singing = six studio tracks. This is a nice change of pace for me as a reviewer, but if RSP is looking for the best possible product they might want to think about expanding in the future.

I would like to see RSP spend more time on blend and transitions. They have a bright future in front of them; this album just isn't the one that puts them over the top.

I thought about writing this review as one long stream-of-conscious, run-on sentence diatribe. Why? So that I could divest myself of my conflicting reactions to this disc and put everything into some contextual concept. And also, because it was the only means which would adequately reflect the hodgepodge of sounds, styles and musicality you get when listening to The Real Six.Pack's Right About Now. It is truly one of the most bizarre experiences I've ever had listening to pop a cappella recordings since coming into contact with Double Dong lo these many years ago. Rap, rock, R&B, jazz, electronica — it's all here, running the gamut from excitingly brilliant to devastatingly dull and amateurish. Even though I'm giving it a two, the adventuresome among you, who actually made it this far down in the review pecking order, should give it a try.

I start the disc from this German sextet and hear a phone/alarm ring like in Prince's Starfish & Coffee (in keeping with this whole time element that they have going), which morphs into this peppy jazz number. Okay cool — something different for me to review. And they aren't bad, a little strident in areas with a very open blend — capitalizing on the tension of stacking the outside edge of notes rather than the more palatable meshing of solid cores. (Sort of Bobs-esque, if The Bobs weren't so damn good.) Interesting dynamic choices, pretty smooth phrasing. Next comes an electronic intro for the '80s hit Mr. Roboto called Kilroy Was Here. They start jamming. What next? Early Beatles, world music ala Vocal Sampling or Neri Per Caso, a swing standard, Michael Jackson, The Rockafeller Skank, iconoclastic rock and holiday tunes. Did someone put a compilation CD in this case by mistake?

Normally, I like diversity in music. Groups shouldn't be afraid to experiment in fields that aren't their stronghold. But I think pro groups should have a more cohesive soundscape, instead of trying to be something for everyone. You aren't going to hear many hair-band ballads from The Real Group, jazz numbers from Ball in the House, or death metal from Acappella. Those groups excel in their genres with occasional dips elsewhere. The Real Six.Pack hasn't found its niche yet (though I strongly suggest jazz or electronic as potential concentrations). Live, the eclectic song selection probably rocks; on Right About Now, it seems abrasive and disjointed without an over-arching theme.

Still, when viewed as single tracks, I liked Right About Now, Mr. Roboto, Kilroy Was Here, Yo Sin Ti, Skank and Jingle Bells (the hidden track) — they are full of energy and creativity that proves this group has potential for being something truly amazing. These songs really resonated with me; they have an infectious groove, nice soloists, passable intonation/blend, and a connection to the source material through their arrangements that is not evident in the remaining tracks.

Some of you will really like these guys. I do, but this album just doesn't do them justice. The bad parts (crackly blend, poor breath support, extraneous breaths at the beginning of tracks and throughout several songs, shaky tuning, bizarre repertoire) wreak havoc with the good parts (the sense of fun, the high energy, the excellent command of English). Right About Now should be titled "Not Right Yet".