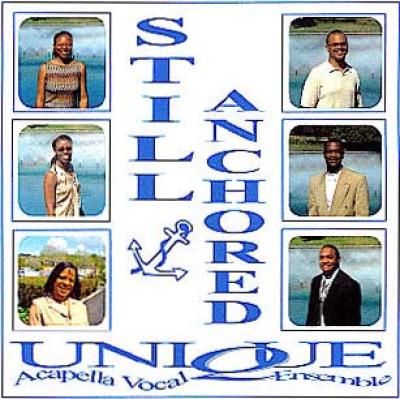 Still Anchored is a collection of devotional music from UNIQUE, a six-member mixed group out of California. It is a decent, practiced album, but not outstanding.

Leads are generally on-target and heartfelt, but the recording does their emotion little justice. Cynthia is rightly featured; her clarity rescues a couple of tracks from the blandness of their mixes (e.g., Over There). I would have liked to hear more from Chris; his lead on I Love Jesus is articulated like a higher, sweeter Sam Cooke. He is featured less successfully on Surrender, a song that keeps him too close to his upper limit.

All of the songs are originals! Most of the arrangements are polyphonic, looking back to old-school gospel by way of doo-wop. Some are more reminiscent of spirituals (e.g., the slow-burning and generally successful Leaving Here). A couple of tracks are choral. In general, the group does better with the polyphony, although Lift Mine Eyes works very well, with real shine and tension in the chorus. Tuning and intonation problems appear on the more choral pieces (especially He Reached Down For Me and the chorus of Marvelous Light); the middle male voice has trouble matching vowels.

The recording is not very dynamic, with highs and lows mushed together. Everyone sounds, for lack of a better word, uninspired. Energy is limited. Choruses lack the ring of overtones that should be present. I kept waiting for the sound to open up, and for the singers really to let themselves go.

All told, a decent disc, but given its lack of dynamic range and zing, it fails to communicate the strength of the singers' devotion. As spiritual, gospel, devotional, music, the album is only average.

UNIQUE Acappella Vocal Ensemble is a six-person mixed gospel group from the San Francisco area. Performing all original music, they have turned out a decent but mostly unthrilling disc entitled Still Anchored. The group has been singing for over 20 years, and they work well as an ensemble, although tuning problems, occasional weak soloists, and a lack of energy brings down the overall quality of the album.

The disc begins with TicToc...Time is Slipping Away, a track which got me thoroughly excited for the rest of the disc with its rhythmic, energetic arrangement and phenomenal lead. The track is really strong and was a wonderful choice to open the disc. Unfortunately, the energy comes down a notch on the next track, and tuning problems start to make their way into most tracks. I find myself wishing they could have made the whole disc rise up to meet that first track, although each time that Cynthia solos (Over There and He's Been So Good To Me), the track elicits more energy from the group and more interest from me.

All of the songs are originals penned and arranged by Dereck Wallace, and on the whole, they're pretty good. The lyrics are often interesting, although there are certainly songs that don't distinguish themselves too much from one another. On such tracks, it's the responsibility of the soloist to go off, to add the spice and flavor, to make the track exceptional. Some are up to the task, but others leave me wanting more technical skill and control. He's Been So Good To Me features Cynthia on lead and another female wailer going off in the background, and it makes the second half of the track a complete joy to listen to. A couple of tracks, like the quietly captivating He Reached Down For Me, feature the whole ensemble working together seamlessly without a soloist. Their sense of dynamics and group musicality shine through on this track.

The disc features a mostly live-sounding mix, which also leaves in the tuning problems. The tuning is rarely painful, but too often they sit on the underside of the pitches, a result of too little energy and breath support from the background. For a live mix, the sound is pretty decent, but in these days of hyper-produced discs, you can't help but notice issues of this sort, regardless of how endearing the live sound is.

But really, the endearing nature of the disc is one of its greatest strengths. These singers are quite sincere and genuine, and they seem to enjoy making some sweet music together, with the occasional pumped out, belted out, energized track thrown in. I would imagine that they are a pleasure to see in concert, and I hope to hear more from them in the future.

The words of the Gospel are truly the anchor of this collection of doo-wop and old school R&B by the 6-member group UNIQUE. The original music and lyrics penned by non-group member Dereck L. Wallace bring a fresh perspective to the Christian genre, and have been a worthy initiation for me into this sub-genre of a cappella. The way these men and women sing, a listener might think that these church songs have existed for generations.

Take that to mean what you will. When I hear the songs, I want to believe the vocalists, but their energy varies widely. Some of the group members sing with such power that the song nearly becomes a conversion experience for anyone in earshot. Cynthia (no last name given), who is featured on three of the tracks, is exactly what I expect to hear from a female lead in this genre. Other soloists sound like a high schooler preparing for his first solo in front of the congregation. Near the sixth or seventh song, the pieces started to all sound the same to me. I would have enjoyed a modulation here or there, a change in dynamics, some vocal percussion on more than just the first track. Some pieces feel hollow, as though the background singers are merely uttering notes and not trying to convey the message of the lyrics through the oohs and ahhs.

But something tells me that's not the point of this music. The lyrics paint a picture of a group's faith and trust in a higher power, a conviction evident to nearly anyone who comes across this CD. Still Anchored has not made any significant contributions to the field of a cappella, but in the RARB world of analytical reviewing, it is a respectable expression of the love for Jesus these three men and three women have. I think that music for religion and music's sake, as described in the liner notes ("driven not by fame or fortune but by the love of our God…"), is as good a reason as any for fans of this kind of music to buy the album.

For ordering information, email UNIQUE at isanghelives@aol.com or mail request to: