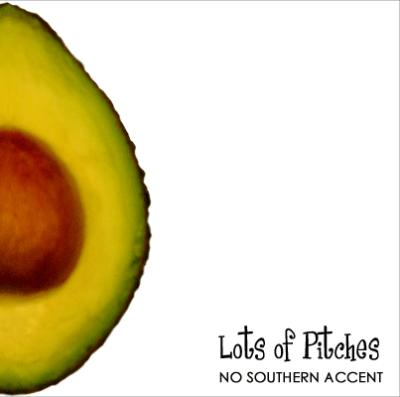 Enthusiasm is a tough date for a would-be record reviewer. Panning the album feels cruel, like actively aiming for roadkill. But sometimes, dead squirrels happen.

Now, I am NOT trying to compare Lots of Pitches to murdered wildlife. This album is way too exuberantly alive, a tribute to the joy of making a cappella. It also isn't very good, at least by modern standards of tuning, mixing and production. Light solo voices are buried behind a blur of similar singers at the same volume. The production is "natural", which is to say not smoothing much of anything out. And the pitches are all over the place. The sopranos veer sharp here, flat there, while the tenors and altos disagree on their destination and the solos often take a sine wave approach.

Toxic is the closest thing to a really good song. Danielle DeCosmo has a lovely voice and the background pulls together behind her in a nice package. It's a welcome change after the frustration of If You're Not The One, an achingly out of tune power ballad with an unlistenable key-change ending. Still, it might have gotten better play at the front of the disc, ahead of the Techno Medley, where a good energy and snappy pacing are offset by the absence of blend. In other specifics, Kyle Scherer (note to Kyle: you're a very good baritone. Stay down there.) and Cara Christeson deliver surprisingly good solos in Where Da Party At?, but I could barely hear them no matter how I fiddled with the settings on my aging stereo.

I would like to think that every college group I sang with was at least this good or better, but the truth is, I don't really want to know if I'm wrong. I sank my heart into collegiate a cappella and got a fair bit of love, heartbreak and goofy memories in return. I wish the same or better for everyone else. That's reason enough to keep making records like this one, whether or not anyone should ever listen to them.

No Southern Accent's recent debut Lots of Pitches (insert called-for joke here) is completely true to its name. A LOT of pitches are sung on this album — some are good, many are bad. Actually, soloists aside, fairly few of them are "on pitch" or in tune. This problem can be expected of a fledging collegiate group making its first recording, and it's one which I'm sure they will grow out of within a couple of discs.

I'll start with the production quality. For a cappella purists, this is a very "clean" album. Naked really. There is no auto-tuning here, much to the chagrin of this reviewer. I would venture (because I can't always tell these things) that most of the songs were recorded on five or fewer tracks: one track for the soloist, an auxiliary track, one for the drummer and a couple for the block.

The songs sound like the bare recordings from my days in Tar Heel Voices, when we rarely went over three tracks in the studio. The mistakes left on the album seem to indicate that they had to go with whichever take had the best overall sound. Gah, I remember those days.

Most of the mistakes are in the female voices, but often the tenors will throw some clunkers in there. Pitch hovers precariously around the tonal center in the upper registers during held passages making blend impossible. This is really evident in Red Blooded Woman, (a song that I wanted to bump up tremendously as I'm a big Kylie fan) and Powerless where the term piercing soprano is put into practice.

The tenor line occasionally seems forced, which could be the result of the arrangements showcasing that voice part unnecessarily. It is good to bring the basses to the forefront (NSA's basses are excellent, providing a fantastic bedrock on which the upper voices can play), but in co-ed singing, the tenor line is a supplemental/coloring voice. When tenor "ah"s are the most prominent section in a block, or too loud when the other voices have nice moving lines (One Way Or Another), the arrangement needs a bit of tweaking and some fundamentals of voice balancing. At no time should the words "bow bow" be as loud as they are in Walking On Broken Glass, a song on which everyone just falls apart.

And that's one of the saving graces of NSA and Lots of Pitches. The soloists are fairly competent or at the least extremely entertaining. Uncharacteristically in the co-ed realm, the men are stronger on their numbers than the ladies. Kyle Scherer deserves particular kudos for his work on Where Da Party At? and If You're Not The One. Brandon Overmyer's solo on Champagne High kept my mind off of the song's blending struggles. Cara Christeson's rap on Where Da Party At? and Stephanie Ballard's emotionally-tinged Powerless are standouts for the women.

Another strength is the group's cabal of vocal percussionists. The drumming is shared by a number of folk who all perform admirably. Jeremy Tharp, Grant Pettit, Neil Malek, and Scherer all have a strong arsenal of spitting techniques at their disposal.

The better songs on the album are the ones the group has been singing for a number of years. Techno Medley and Where Da Party At? have been showstoppers in NSA's repertoire for a while. You can tell these are the songs the group is most comfortable with, as they are the most cohesive and tuneful of the bunch. I'll admit to grade inflating Toxic, I simply love the song and right now, it's enough just to have a group record it to give it a good score. Sue me.

I applaud the group for bringing a decidedly different flavor to southeastern a cappella. I love NSA's repertoire and the energy the group brings to its performances. On subsequent recordings, I hope the group can up the musicianship so that blending and balance issues are no longer a hindrance or at least hire a good producer who can alter and augment what nature doesn't automatically provide.

No Southern Accent's eclectic mix of techno and dance music coupled with some old school pop rock is, at its core, a decent experiment as a first album, but fails in its entirety to either entertain or even keep my interest. Admittedly, the track list got me excited to listen; properly engineered, this would have scored a solid 3 overall or more. However, in light of its amateurish, recorded-down-in-my-basement sound, Lots of Pitches is a weak entry for any college group.

Breathy, pitchy, and altogether unmemorable, the album sounds muddled and mumbled. Background syllables run into one another and most soloists fail to impress. The tricky arrangements make it difficult for background parts involving intervals to be sung quickly enough with the right pitch and tone. Especially for the genre of music presented here, the miking is particularly ineffective. The positive energy emoted from all of the singers contributes to the overall sound of the album but unfortunately doesn't make up for the tuning and rhythm problems.

Arrangements are problematic. Flat bass pitches and weak percussion (both in volume and energy) make it difficult to pick up the tempo in some tracks. I had to listen through Powerless for a good 30 seconds to figure out what was going on. Additionally, most of the back-ups struggle throughout If You're Not The One and even more so after the modulation. The singers aren't sure how long to hold out their notes, leaving choppy cut-offs and flattened tones. In Toxic, the notes of the signature slides that are heard in between lines of the verses fall somewhere between flat and sharp, but certainly not centered.

There are a few redeeming qualities. A few of the group members exhibit good energy on leads, including Danielle DeCosmo on Walking On Broken Glass and Annette Pages on Take Me Away. Some soloists' contributions to improving the overall quality of the album should not be taken lightly; this otherwise boring and underdone album might have fared far worse with weaker lead vocalists.

What I do like about the album is that it gives me a sense of what the group might sound like live, and even as a RARB reviewer, I'll admit that that's really how I judge the quality of an a cappella group. Awkward tracking and production values aside, I'll bet No Southern Accent is rather entertaining in person. I'd have liked to see that translate better to this otherwise bland and unexciting album.

"Lots of Pitches" can be ordered from the group's website.