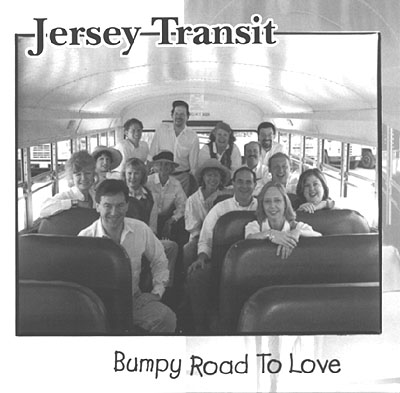 Bumpy Road to Love is a very deliberate effort from the decade-old group, Jersey Transit. Of course, if you waited ten years to release your first CD, you'd be careful too.

While the songs on this recording span a range of styles, Jersey Transit leaves the impression that their specialty is jazz, show tunes, and pop standards, and anything else is included to give a semblance of variety. The album is deceptive in that it is bracketed by its most inventive songs, beginning with Monkee Marley Medley — by far the most innovative arrangement by a member of JT — and ending (not counting the "hidden" track — a jazzed-up Star Spangled Banner) with an Enya-fied arrangement from Gabe Rutman of What I Like About You. In fact, the majority of arrangements on Bumpy Road are by non-group members, for what it's worth, including all but one of the contemporary a cappella tracks.

Jersey Transit is a relatively large group (16 members) and they correspondingly depend on a big, blendy, often choral, sound. They largely succeed at this — aside from the occasional moments of iffy pitch or when a voice or two asserts itself a bit too much, this group is a veritable blending machine, especially on the jazz and show tunes. (They have a little more difficulty keeping it consistent during the contemporary a cappella stuff.) They also have the advantage of a large pool of trained and talented voices to sing solos — aside from their dubious choice for female soloist on Seasons of Love from Rent (way too square — as is the group as a whole — for a song that should have more of an edge). Standouts among the soloists are musical director Tom Borden and Sherry Lichtenwalner (who also shows off her ensemble whistling ability on Sondheim's Anyone Can Whistle), who between them provide enough personality and energy for the entire group.

The thing that bothers me the most about this CD is the sameness of a lot of the jazz and traditional pop arrangements. I've reconciled myself to the fact that there doesn't have to be a rhythm section on every song, and that if the basses sing as part of the choral ensemble instead of a moving line, there's nothing inherently wrong with that. At its best, this approach can yield a lovely choral piece (What'll I Do?, When I Fall in Love), but at its worst it reminds me of an a cappella doo wop group I once saw that was clearly singing only the vocal part of a song that was meant to be accompanied, leaving big holes where the accompaniment would have been. I'm doing Jersey Transit an injustice because they are nowhere near as bad as this other group, but the truth is that some of the jazz tunes leave me yearning for more structure. The sameness problem is not helped by the fact that many of the songs in this category are slow to mid-tempo, which makes them tend to blur even more together.

Overall, on this album, Jersey Transit demonstrates an ability to do what's on the page, no matter the style of music. On some of the contemporary a cappella tracks, it seems like the group actually needs to go beyond the page and loosen up a little bit.

If you're looking for group with a cutesy "pops" concert choir sound, covering jazz standards, musical theatre and very lite rock, you are in luck. Jersey Transit's Bumpy Road to Love is a solid album of white bread "family entertainment". In their own words: JT was founded on the motto "Music, Friendship & Love". (everybody say it: "awwww") The cover depicts 15 utterly sweet-faced, white-shirted choristers in a school bus, seemingly on their way to the Sunday church picnic. Oh, but don't be fooled. Look closer and you'll see a bit of their wild side: several of their number are distinctly not wearing seatbelts. Wild? Oh yes, my friend. But not insane. Thankfully, the bus is in a parking lot.

Let's start with the pluses. Blend, blend, and more blend. They've worked on it and you can tell. Even when the pitch wavers a bit, which is the exception, to be sure, the blend is always there to smooth it over.

Production: Jeff Chestek's engineering and the producing team of Jersey Transit, Tom Borden and Chris Henry are rock-solid. Effects are used tastefully. The recording quality is high and most importantly, the widely divergent song choices sound like they belong on one album. That is no small accomplishment and it a hallmark of quality producing. If you like one song on this recording, you will probably like them all.

All the songs are sung with heart, but none with soul. The arrangements are occasionally challenging, but nothing ground-breaking. Every now and then a pretty chord caught my ear. Dynamics are also handled nicely. The solos aren't noteworthy, but neither do they detract. "Nice" is really the word of choice.

"All in all," Jersey Transit informs us, "it's been a serendipitous, often winding, but always rewarding journey down the bumpy road to love." Ah. Hence the album title.

If your parents were in an a cappella group, this just might be it.

eclec*tic (adjective)
(Greek eklektikos, from eklegein to select, from ex- out + legein to gather — more at LEGEND) First appeared 1683

Many groups pick a certain style or genre and really work on that to become a strong example of that genre. Rockapella and The House Jacks excel in rock, while Chanticleer does classical choral style as their niche, and Vox One does Jazz really well. Then you have eclectic a cappella groups — groups that either can do a wide variety of songs well, and groups that have too many interests among its members to ever decide on one genre. The sometime pitfall of this is that they try so many different styles that they can't really nail any one style to the level that the group is capable of. This is the case with Jersey Transit.

What this group does really well: Broadway/show tunes. Seasons of Love, from Rent, gave me chills, and What is this thing called Love, Anyone Can Whistle, and Old Devil Moon fun to listen to. Now, show tunes aren't my personal cup of tea, but they were fairly well tuned (except for the whistles..oops. =) , enjoyable, and competently to really well done.

What this group does OK: Be-boppy vocal jazz and ballads. Is This Any Way to Fall in Love was very wittily done, and the group can make Bonnie Raitt work for them.

What this group doesn't do well: Rock/pop. The Monkee Medley left me flat, and the opening of What I Like About You was cute, but just barely cute on the shy side of cloying, but the rest of the song doesn't work if it doesn't rock.

And the thing is...musically, this is a good group...that could be better if they specialized. Their Broadway and close harmony stuff was very, very cool. And Seasons of Love has already made my a cappella mix tape collection. I just think this is the type of group where certain genres work for them..and some don't. Overall though, I give the record a thumbs up, on the basis of more things work than don't in their song selection.

This is a remarkably unremarkable album. Overall sound is average, as well as tuning and most of the soloists (musical director Tom Borden is the one shining difference there). Even the interesting arrangements (some done by the group's Lolly Barton — notably What Are You Doing and They Can't Take That Away — and some by Deke Sharon and Gabe Rutman, among others) are performed rather squarely and left me with only a few favorite moments — the final chord to I Can't Make You Love Me and the flange vocal guitar solo in What I Like About You. The plodding metrical treatment of Round Midnight was in my opinion a poor choice, and the soloists seemed to be fighting the backup for control. Across the board, (again, save Mr. Borden), energy is lax. While this is the group's first CD and will hopefully be a learning experience for them, I expected more from a group which has been around for ten years. One surprise was including the national anthem as a hidden track... possibilities for marketing, I suppose, but not too interesting a track for the general public. Gray, plain liner notes are more telling than I'd initially considered... This is a fine CD for family and friends of the group to have but a "pass" for the rest of us.

Jersey Transit is a seemingly jazz-oriented, strikingly choral-sounding group hailing from (quelle surprise) out East. On Bumpy Road to Love they ease their way through sixteen tracks composed largely of standards with some fantastic forays into other genres. Their strengths lie partially in their numbers, and in the laden blend they pour through every arrangement. One comes away with the consistent impression that the members are all very used to singing with each other.

That communal choral feel is aided by the group's strong musicality, clearly classical in origin. With nary a sour note to be heard, tuning and blend are both sheer delights. Jazzy chords and tricky melodies are never fumbled, but handled with aplomb.

Where their glee club sound and lock on tuning fails them at all is in terms of energy, innovation and (sometimes) soloists. As stated, the group presents a consistently choral, consistently very smooth feel, which while appropriate for jazz standards has the effect of leaving some other genres washed out. Most of their arrangements, similarly, are penned mainly in unison rhythms, losing out on some possible playing with textures and sounds. Innovation should be no prerequisite for a good album, but to try music outside of one's boundaries and then not to let it rock the way it should can leave the listener a little flat. Finally, soloists are sometimes too classical, too dead on, and thus less purely expressive than they could be.

Frankly, this is the sort of album this reviewer would love to have on in the background, humming melodically away while he mails romantic missives to faraway loves. It is consistently good but not continually interesting. Bumpy Road to Love is a solid effort, but a little less energetic than one might like.