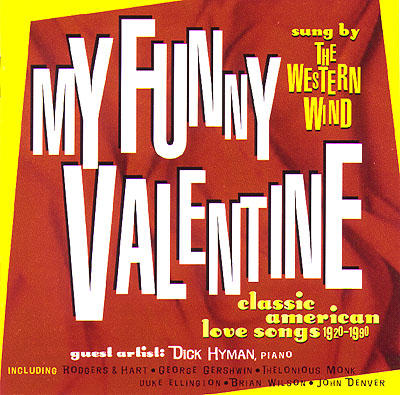 This is a wickedly unbalanced album. The name implies that the Western Wind Vocal Ensemble will take you on a sort of historical musical tour starting at the 20s and working it's way up to the 90s. What you actually get is a collection of pre-50s jazz standards (by Ellington, Rogers and Hart, Thelonious Monk, and the Gershwins) with a few token pop songs thrown in. There isn't anything wrong with that, just don't be mislead. The TRULY problematic imbalance of this album is the make-up of the group itself. I've never heard a group whose chords are so darn high. It's no wonder when you look at the groups members — there are six singers but there are no altos or basses! They have two sopranos, two tenors, just one baritone, and to top it all off, a countertenor! Two guest singers don't help the mix much: they needed the bass, but was there any pressing need to invite an extra tenor to sing with them? Besides, the real problem is the lack of altos. The sopranos define the sound here. Maybe there are some people who like that high-end blend, but to me it just sounds shrill.

Of the jazz standards, some of the better cuts have Dick Hyman sitting in on the piano. He graces Oh, Lady Be Good with light rolling piano lines and gets tight with Sean Smith (who does a guest spot on the upright bass) in the instrumental section of I Got Rhythm. Without the instruments, the Western Wind Vocal Ensemble lethargically sings jazz songs with too much legato and not enough JAZZ. And don't forget those overly high harmonies. You add it all up and you get an act that sounds like a cabaret act but without the theatricality. However, they do turn in a nice performance on Well You Needn't. They actually seem to get a real feel for the timing of the song. Before we move on to the pop song portion of the album, you probably want to know how they did on the title track. Well, they were close to discretely adding the final nail into the coffin of the world's most overdone song with their drawn out performance, but they managed to pump a little more life back into the tune with a prolonged up-tempo bridge section.

And now, the pop songs. The best of the bunch here is Leaving on a Jet Plane. Ultimately, they kill this classic camp-fire song with unemphatic singing and their typically high blend, but they sure do get it off to a great start! The arrangement is interestingly sparse, original, and very well timed. Which makes it all the more a shame that they don't put any energy into it. I Can't Make You Love Me lacks any emotional turbulence (witness the stagnant bridge section, for example) and In My Room, which was never very moving in the first place, is downright lifeless here. They try, they really do, to leave you with a smile on Sh'boom, but they give what comes off as a mere imitation of an energetic performance. There's no real drive or heart in it.

There was one thing I seriously liked about this album: The liner notes. I liked the fact that they were thought it would be worth it to do more than the typical one-sheet insert that most a cappella groups do. They actually write real liner notes, a rarity in any album nowadays. I don't like the way they sing the songs gathered here, but the liner notes show that they do respect the songs. And you have to appreciate that.

Ahhh, The Western Wind. If you have never seen or heard The Western Wind perform, you are missing a treat. TWW is a supremely talented group with a sound that can go anywhere and do anything. While many of the members have been the group for less than 10 years, TWW boasts a rich history and an impressive list of albums — it's roots go back to 1969!

Their current album is a collection of classic American love songs that have been written since 1920. You can look at the list of songs to see that the collection has a decidedly jazzy slant. There are songs by Duke Ellington, Thelonious Monk, George & Ira Gershwin, and Rodgers & Hart. But for a little change at the end, they have songs by John Denver, Bonnie Raitt, the Beach Boys, and the old rock & roll classic Sh'Boom. That last song has an interesting arrangement that makes the song sound more like a big-band number than a doo-wop tune.

The Western Wind's trademark tuning and technical prowess is on full display throughout the album. As one would expect from a group of their caliber, they never miss a beat or slip out of tune. The sound is polished, and so is the presentation.

If you want to get your hands on an album filled with classic songs performed as though they were written for a cappella, get this album. While you may not find yourself reaching for this album every time, you will never regret having it available at a moment's notice.

Groups often separate themselves into two camps: those with modern values (originality, authenticity, emotional intensity ...) and those with traditional values (blend, intonation, pure tone ...). The Western Wind Vocal Ensemble is decidedly one of the latter. Jazz, and particularly vocal jazz, is a realm where these ideologies frequently bump heads. Though some jazz ensembles are known for their smooth blend or pure tones, jazz without originality and authenticity is decidedly second-citizen in the jazz community.

Unfortunately, the Western Wind's My Funny Valentine is likely to leave both "camps" disappointed. Blend, normally a strong suit for this group, is intermittent, overcome by mixing, range or tone choices. Vibratos are sometimes careless and arbitrary. Tone is neither traditionally pure nor contemporarily edgy. The rhythms and diction are too often classical. And that's being generous. Jazzers might just call it "square". If this were a college group, I might be giving more generous praise, but a group of this caliber demands a more stringent critique.

The opportunities for text painting and emotive expression are often ignored or mishandled. The scat syllables are tired. The bass parts rarely get that low. The sopranos frequently get too high. Dynamics, and intonation, however, are predictably good from this veteran group.

Production is surprisingly weak on this recording. I am frankly amazed that Ted Spencer, a staff engineer at New York's renown Hit Factory, is credited with the recording, mixing, and editing. His credits are impressive. But, be that as it may, this album's technical merits leave me unimpressed. The reverbs are uncomplimentary. The EQs are often mid-heavy. Bass is lacking throughout. Yet, biting frequencies like 4k are sometimes aggressive enough for me to wince. Compression is underused, for my taste. Some moments are actually hissy, as if recorded on poorer equipment; softer musical sections expose these flaws more dramatically. Some of the problems with the piercing sopranos are due to mixing choices.

The album confesses, "[c]reating a jazz vocal style has been a fascinating challenge for the singers, whose vocal techniques were primarily developed for early music, classical and contemporary idioms." I wish America's self-proclaimed "pre-eminent" vocal ensemble either hadn't strayed from their widely recognized classical strengths or had worked harder to master the "fascinating" challenges of jazz music.

Tight, tight, tight. The Western Wind is a finely-honed singin' machine. This entire album sparkles with clear soloists, impeccable tuning, and superb blend even during intricate arrangements. A fine recording to celebrate the group's 30th season, this CD is a must-have for fans of the Swingle Singers, the King's Singers, and vocal jazz fans in general. Arrangements are finely executed — I especially like the openings of Funny Valentine and Round Midnight. Soloists are crystal clear throughout and obviously have complete control of their instruments.

My first gripe with the album is that one of the male voices uses some vowels which don't mesh with the rest of the group at times - most notably in Mood Indigo and Well You Needn't — which bites into the group's usually fantastic blend. Well You Needn't is a harder listen than the other tracks, a bit more shrill overall. ...Jet Plane is a primarily madrigal-sounding arrangement, but hey — it's John Denver after all... There's a nice mix of old standards (Ellington, Monk, etc.) and modern tunes (I Can't Make You Love Me is nicely done), but In My Room doesn't measure up to The Blenders' arrangement from Totally Whipped.

The only non-a cappella tracks on the CD are Oh, Lady Be Good and I Got Rhythm, and this CARA-winning CD (Best Jazz Album, 1998) is a great showcase by a most talented group. Buy it. Now. (I don't give these kinds of scores to many albums!)

Despite the Western Wind Vocal Ensemble's strong reputation, the first reason I would tell people NOT to purchase this album is its low repeat listenability. I listened to the album at least three times; that was enough for me. One usually buys an album because they like particular songs on it and want to hear them again. This was not the case.

Overall problems of the album? Phrasing is the biggest. The entire album is a collection of love songs, but due to the huge lack of phrasing, the words are hardly believable. Too many songs sounded like series of notes and only several pitches in a phrase; instead they should have had long, lyrical lines with some of the beautiful text and chord progressions they are singing. The recording quality wasn't characteristic of a professional group. Although it wasn't brassy and bright (like too many recordings) it sounded like the group was singing into a pillow. The actual composition of the ensemble also caused several problems. There are two sopranos, a countertenor, two tenors, and a baritone. As an alto: where are the ALTOS and BASSES? The sound was high and one soprano was almost out of control on many pieces. As far as the arrangements go, "oohs" were way overused, and the syllables "ya-da-ya-da" lead the performers to the point of extreme "cheesiness". Most of the arrangements were "oohs", occasional scatting (not improvised at all) and a rare swell in dynamics. A few tracks had piano and string bass. a cappella? No. I didn't even understand the need for the instruments; the voices doubled them.

For more information about My Funny Valentine, The Western Wind, or other Western Wind recordings, concerts, or workshops, please visit www.westernwind.org or call 1-800-788-2187