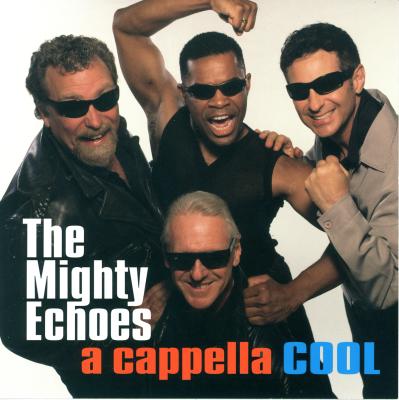 Today, for ease of reading, I offer two versions of my review of doo-wop quartet The Mighty Echoes' fourth album entitled A Cappella Cool:

Short Version:
If you like doo-wop, you'll probably enjoy this album. You won't be over the moon, but it does feature good, and occasionally really good, performances of standards, predominantly, with a few tracks that might be considered a bit "hipper". Generally solid blend, a wonderful high tenor and a sonorous bass are enough to keep things reasonably interesting, and the songs are blissfully short. All around, maybe a B/B- production.

Longer Version:
For my money, doo-wop, like barbershop, has certain inherent stylistic challenges that are difficult to overcome, especially when competing for the ears of the contemporary a cappella listener. I know quite a few fans that see doo-wop as something to be admired when performed well but not something they would choose to listen to if given a choice. Personally, I'm not quite that extreme — I enjoy listening to doo-wop now and again — but I'll admit that it really has to be brilliantly, and preferably inventively, rendered for me to stand up and take notice.

If that's my standard, then this album falls short.

The gents of The Mighty Echoes do a nice job with the standards, but they bring virtually nothing new or interesting to the material. The recording sounds extremely pure — no pitch-correction or other manipulation is noticeable beyond some reverb — and that is commendable, but the occasional pitchiness does therefore creep through as do a few sloppy cut-offs. The high end (in Tenor I Jon Rubin) and low end (in bass Charlie Davis) are really the anchors, while the baritone and tenor II do just fine when left to sing background harmonies but disappoint when featured as soloists. Songs tend to be verse-chorus repeated twice (with perhaps an extended final chorus) and, for the most part, they are almost identical each time. This doesn't make for exciting listening — at least for me.

Truth is, doo-wop done a cappella faces a further challenge in trying to compete in the greater a cappella world. To sing doo-wop a cappella requires fully realized a cappella arrangements and not just versions that sound like the vocal track lifted from a song that was originally recorded with instruments. Good Vibrations, With This Ring and even White Christmas recognize and attain this on some level (much of the reason for their being "4"s vs. "3"s) while Lean On Me and Wonderful Tonight sound like they would work so much better if the band was allowed to play along.

The Mighty Echoes' website quotes the new "definitive" reference book, "American Singing Groups", as calling them "the West Coast equivalent of the best East Coast A Cappella groups of the last 20 years." In this reviewer's opinion, that's simply not true. But they do make pretty good doo-wop music. So if that's your thing, this album may be too.

For once, an album that rings true to its title. From the opening chords of A Cappella Cool, I fully enjoyed nearly every note from the Mighty Echoes, truly the next generation of doo-wop. Clean, tight chords with pitch-perfect tuning punctuate the four-part harmony with pizzazz and interest.

Admittedly, one of my favorite things about doo-wop is that its songs are typically three minutes or less, but when listening to the Mighty Echoes, I found myself hanging onto every note, savoring the blend and resonance. Some of the slower songs (I Only Have Eyes For You, Chapel of Love), feel empty with only four vocalists, but the doo-wop style lends itself beautifully to the more upbeat pieces (Return to Sender, Daddy Cool) with a fun walking bass and well-tuned back-singers. Still, a lot of the tracks lack creative motivation, and as a listener, I feel a little cheated getting an album that just rehashes what I've heard elsewhere. Lean On Me, Up on the Roof, and In the Still of the Night are of course the culprits for dragging the originality score down. It's not impossible to make the old sound brand-new; see Blue Jupiter's Ear Candy, on which Stand by Me thrilled all three reviewers and received a solid "5".

This is not to discount the quality of the vocals: the four men each perform well in their own right as individuals and as a group. Nearly all of the solos are well-executed with a high energy. Of particular note is tenor Jon Rubin, whose energetic lead vocals sound straight out of the sixties with nary a voice crack or foul note to be heard. Jon's voice contrasted nicely with bass Charlie Davis (from whom I would have enjoyed more solos) as they both sang lead on White Christmas.

The weaker tracks here are those better known for their actual instrumentation. To this day, I haven't really met a Good Vibrations I've actually liked. The one appearing on A Cappella Cool is riddled with breaths in the wrong places and falsetto voices that don't quite achieve the Beach Boy sound. It still receives a "3", however, for its tuning and decent arrangement. Whispering Bells accomplishes the imitation of the bells a little more solidly, and with the assistance of the well-grounded bass from Charlie Davis, has a liveliness that got my head bopping and shoulders swaying.

But I have to admit, the whole album pulls it all together nicely, details aside. It's a refreshing breath of fresh air and a nice dose of summertime sound. Altogether, a mighty good time from the Mighty Echoes, whose clean vocals and balance keep the doo wop genre alive and well.

Some might say that A Cappella Cool is far behind the times of cool a cappella, but I say that it embodies the cool from a different time.

It's interesting to listen to a sort of preservationist album in a style that had so much influence over contemporary a cappella. For the first couple of tracks I had to remind myself these talented singers weren't trying to be contemporary a cappella. The great thing is that they weren't even trying to be retro, they were just singing in a style they loved.

It's hard for me not to compare songs like Lean On Me and Up On The Roof to the versions that the Hyannis Sound and Rockapella do since that's the style that I prefer, but I sang along with nearly every track, nearly every time. There is a maturity of musicianship here that is far too absent in most music, let alone a cappella. Tempos aren't rushed, phrases are allowed enough space to let melodies come to fruition, and dynamic variation is lovingly attended to. Let me tell you, these guys know how to seriously soak a song in sentimentality until it sparkles with soggy-eyed sweetness.

Occasionally, I miss the sound of a piano in the background since it was as much a trademark of some of these songs were as much as the vocal harmonies, and I question the choice of adding Na Na Hey Hey Kiss Him Goodbye since it feels like a secondhand effort at sounding contemporary when the other fourteen tracks did so well on their own.

I never got up and danced when listening to A cappella Cool but I did contract a case of uncontrollable toe-tapping. Wait, that's not true. In The Still Of The Night inspired a slow dance with my girlfriend. See? Doo wop ballads still get the ladies.

To order this album, visit Primarily A Cappella.