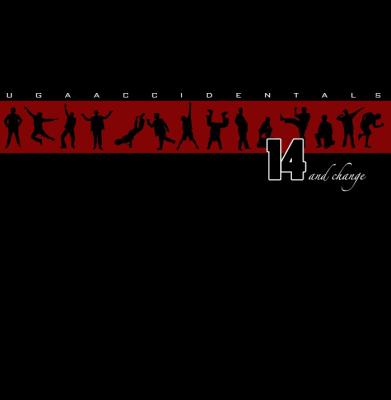 The UGA Accidentals have been around for over two decades, but it's taken them a while to shed their Glee Club origins and embrace the world of collegiate a cappella pop. 14 and Change takes a generally top-40 approach to repertoire, and the addition of rising producer James Gammon was undoubtedly meant to kick the Accidentals into the next gear. But the album feels a bit like a kiddie roller coaster — the highs aren't that high, the lows aren't that low, and it's really not much of a ride when all it's said and done.

Breaking from the ranks of the average will take a couple big steps for the Accidentals. The first is upping the consistency ante on all fronts, including tuning, energy, arrangements, and solo performances. There's too much variability here, from the sweet harmonies of Let That Be Enough to the off-pitch choruses of Don't Lie, from the melancholy groove of The Freshmen to the listlessness of Grey Street, from the texture of Wish You Were Here to the weak falsetto descants on Can't Stop, and from the edge of the Iris soloist to the shriek-fest on Bad. Very little here is awful, but the Accidentals need to consistently fire on all cylinders if they want to really make a mark.

Once the the foundation's in place, the Accidentals need to craft a distinct (and preferably creative) vision for each track. Too many of these songs fall into the same mellow midzone when they should be rocking out (e.g., the plodding Iris and the too-pretty Better Man), and few of them manage to do anything different from the original artists or the many groups who had previously covered the song. The superb Ain't No Sunshine suggests the Accidentals can rise to the challenge; adding a driving beat and bass line and interjecting 'N Sync's "Gone" breathes new life into this overdone cover. But only one instance among a tracklist of fourteen songs does not a superb album make. The Accidentals will need a lot more thrills and chills next time around to give knowledgeable listeners the ride they're looking for.

It's unfortunate that master producer James Gammon didn't receive more credit, because I have a feeling he is responsible for the majority of quality moments heard on 14 and Change. There aren't a lot of them, but the music heard here is mostly an easily accessible collection of pop and rock tunes all arranged with a nod to (surprise) the Academical Village People. The thing is, I just don't buy most of it.

I like that the soloists are well-rounded and pretty much committed to their music. It's not perfect, but for the most part, it's believable, and that's gotta count for something. There are subtle pockets of shortcoming, like the reverberant sibilance and air-popping "p" heard by the soloist in Better Man and a lack of blend which is heard on a number of songs. It's not that the voices don't blend, but they've been mixed in such a way that when the men are singing different instruments they all noticeably stand out. The soloists are also difficult to hear on Don't Lie and Iris.

The Accidentals could have shaved off about 6 minutes from 14 and Change had their songs been up to same tempo of the originals. Nearly all of the slow tracks, but particularly Grey Street and Iris, are just a few beats-per-minute too slow. My boyfriend would like to point out, however, that while the song drags, soloist Tyrus Eaves actually makes sense of what were previously unintelligible-to-the-listener lyrics on Michael Jackson's Bad. ("Your talk is cheap, you're not a man, you're throwin' stones, to hide your hands"... who knew?!)

Finally, there's a fine line between creativity and just plain annoyance. It's one thing to use the song's own lyrics as background (Better Man) but when you start mixing in Kid Rock's Bawitdaba, Daniel Bedingfield's Gotta Get Thru This, En Vogue's Free Your Mind, and a fourth piece whose identity I still can't figure out as an instrumental bridge, it pretty much spells disaster.

The most successful are the alt-rock ballads Let That Be Enough and Wish You Were Here. Arranger Yannick Morgan has a firm grip on utilizing basses intelligently with a scattering of legato tenor voices to create a nice aural landscape; these two songs have a more colorful character than others. And true to their glee club roots, the Accidentals execute Georgia Medley and Blessing rather well, although breath sounds can be heard frequently.

14 and Change is occasionally engaging, but certainly not earth-shattering. It's a college-friendly album with cool experimentation like the Chili Peppers' Can't Stop and a better rendition of the Bill Withers original Ain't No Sunshine (appearing here as performed by Lighthouse Family), but I'd leave it at that. It's pleasant enough for the fawning Bulldog coeds, but not quite up to par for this reviewer, and just enough on this side of 3 (a 3.6, if you will) to make it "good" over "average".

For the first twelve tracks of 14 and ChangeI kept noticing that something wasn't quite right. It was as if I were watching a very talented group perform a new venue with freshly starched and pressed dress clothes that kept itching during the performance. The show goes on and the group is well received by the audience but there is a feeling that the group was out of sync and didn't put on the best show they could have.

It wasn't until Georgia Medley and Blessing, written by former Accidental Paul Tate, that it felt like the group had changed into their more familiar wrinkled Ts and jeans and were performing for their buddies at the bar.

The point I'm trying to get at is that while most of 14 and Change is pretty good, by a cappella standards it feels forced. Bad is the best example. It sounds more like someone singing how someone who is bad would sing because they know they aren't bad themselves.

There are a few things that I want to briefly mention, though. It was tiring for me to listen to a constant barrage of musical ideas. There are lots of things happening a lot of the time and it's hard to absorb them since they are all fighting to be heard. Something that would have helped, obviously, is less ideas happening simultaneously, but also more work with panning ideas to the left or right. It's easier for me to accept two different ideas if they aren't occupying the same 'space' in me ears. There are a lot of good textures going on the in the background, and I don't recommend scrapping them all, but I do recommend being more selective about which ones get the spotlight. Notice that while the last two tracks are homophonic and homorhythmic, they are the fullest sounding tracks because I can process everything presented to me and there is plenty of space in between phrases for me to digest what I just heard. Don't Lie is pretty good at balancing an intricate background against layered melodic ideas; it feels big without feeling cluttered.

Ultimately, there is a warmth and familiarity in tracks 13 and 14 that are absent in the rest of the album. If the Accidentals can figure out how to feel like they're in their jeans and Ts while performing in a tux then we'll be listening to some top tier stuff.