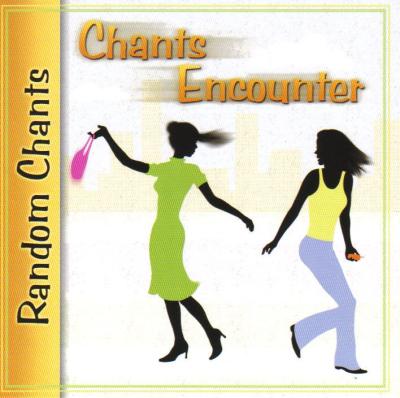 I know that my fellow reviewers at RARB try hard to give the benefit of a doubt to a group and not come across as purposefully mean-spirited when critiquing a particular recording. We understand the blood, sweat and tears that have gone into making an album. Yes, just that feat alone in the a cappella realm often deserves accolades. Regardless of the technology that has been created, it's still a daunting task to digitize the voice in a way suitable for mass consumption.

And then sometimes a wild hair flies up our craw and the chivalry goes out the window.

Unfortunately, the time has come once again after having listened to the debut album Chants Encounter by the Boston-based female group Random Chants. This album was fresh when the Loreleis, Duke's Out of the Blue, the Virginia Belles and the Princeton Tigressions made it 15 years ago. Just look at the tracklisting: the two most current songs are Annie Waits by Ben Folds and If It Ain't Here by The Wyrd Sisters, both of which were recorded in 2001. Everything else is pre-1995. In and of itself, recording old songs is not a bad thing, if you put a fresh spin on the arrangement. The arrangers in Random Chants do not. The group prides itself on not being a standard female group (not your mama's a cappella) as the website claims. Meaning, they aren't the soprano heavy, light and airy girl singers of the past. That's a bold statement with the current crop of female groups being just as gutsy as the mixed and male groups of today. They are more rooted in the alto range, but does that really mean that much anymore? I'm jaded because I cut my teeth on listening to the above-mentioned groups, who were so far removed from what was considered "typical" at the time.

Honestly, listening to the album brought me back 15 years. By the time I got to Leave It, I thought I was in one death spiral of a time warp. I was not pleased or impressed. I started filling in missing vocals parts from the Loreleis' arrangement. Yeah, I do that still.

But had this album come out when RARB was in its infancy, it probably would have garnered some pretty high scores. The music is not that bad — if I were listening to it in a vacuum. The vocal percussion, when present, is elementary at best. There are only occasional tuning problems. The soloists are competent. Even now, it's a pretty average disc. The lowered score comes from the fact that this is a professional group, not a collegiate one.

The album sounds like the ladies are trying to recapture their collegiate a cappella years — something with which I'm familiar, unfortunately. I know my review isn't going to stop them from performing or recording — that would be a horror — but I do hope that they expand beyond their current limitations and join the rest of the a cappella world in the 21st century.

With their debut album Chants Encounter, the Random Chants — a semi-pro all-female group based in the Boston area — have set a cappella back 10 years. Sometimes a 'classic' sound is old-school or retro. In this case, it's just plain bad.

There's no easy way to put it. This is one of the worst albums I have reviewed in a long time. There is nothing refined about it. The Random Chants start off with a poor foundation of repertoire and arrangements. What are these songs? I've never heard, or heard of, at least half these pieces, and after this album I never want to hear them again. And I'm definitely showing my personal preference here, but no a cappella album ever should have two different tracks by the Indigo Girls on it. Then there are the arrangements. To say they are restricted to 'ooo' and 'baa' is no exaggeration. Arrangements are ridiculously simple and boring to hear.

The singing isn't great either. Everything sounds unpolished. I'll admit that the Random Chants manage to hit their stride occasionally, and when all the voices lock it's a pretty decent sound. But these moments are few and far between. The blend is horrible — more to come on that later. Tuning is touchy at best. Tempos are inconsistent. Their sound is immature, many of the parts sounding like eighth graders. Worst, however, are leads, which are almost uniformly bad. These women simply aren't comfortable taking the lead, and they sound painfully exposed when forced to do so. Many of them are out of their range. Many simply sound inappropriate for their song. None sound good, with the possible exception of Alix Fox who manages a decent job on Fire. It's no surprise that the group sounds best when singing in block, such as the beginning of Leave It.

Production is nonexistent. It sounds like there was almost no mixing, editing, effect, or post-production done on this recording at all. Even reproduction is awful. I don't know the setup these ladies had in the studio, but it clearly was inadequate for capturing them. The atrocious blend is likely a function of the studio and everyone's distance from a mic. Different parts haphazardly jump out and then blend back in. In each song a few parts have prominence while others are barely audible; this changes from song to song and seems to be completely random. Don't get me started on the 'vocal percussion'.

I was left asking, why did the Random Chants make this album. It isn't fun to listen to, and even more importantly the group seems to be having no fun singing it. Maybe their live performances are better, but as a representation of the Random Chants, Chants Encounter simply doesn't cut it.

When I first heard I was getting an album called Chants Encounter, I think I was expecting something a little more ... Gregorian. But instead, it's the same tired old a cappella with the same tired old issues. The Random Chants are neither here nor there, a plain Jane kind of all-women's group with no real outstanding qualities and barely a hint of VP. Borrowing from an array of mainstay arrangements, the tracks on Chants Encounter are substandard and not at all satisfying.

The album isn't fully disastrous, but it could certainly contribute to the "How Not to Make an A Cappella Album" compendium that could be hitting CASA any day now. Lack of vocal percussion notwithstanding, some of the arrangements are actually perky with a buoyant energy that belies the terrible flatness of the low altos in practically every song (Galileo, Hit Me With Your Best Shot). Pieces like Love Will Keep Us Together have a cutesy high school girls' glee club "select group" quality to them that's unfortunately not quite as endearing as the real thing.

Sweet Child of Mine is a contradiction in all senses with a solo and arrangement that's neither Sheryl Crow nor Axl Rose nor Debbie Gibson (yes, inexplicably inserted in the middle of the song is her single Only in My Dreams). It's nonsensical, and makes a mockery of the song, especially with soloist Kiki Lansdale who, while utterly passionate and committed to the lyrics, is frighteningly all over the treble clef and hits notes that exist somewhere between natural and sharp. On the contrary, lead singer Alix Fox seems cool as ice rather than being on Fire.

There's energy to boot, which is possibly the number one thing keeping the album from receiving anything lower than a "2". Hit Me's soloist, though annoying, seems to love what she's singing, and it absolutely comes across in her performance. Furthermore, some songs or parts of songs have been reverbed, creating a blend so very lacking elsewhere — because it's not happening much naturally. And I can't understand why most of the better tracks wrap up the album on the back end rather than the front. If I didn't have to listen to every single song, I'd have ended around track "4".

At sixteen tracks, Chants Encounter is about fourteen tracks too long. This one- or two-channel recording is a demonstration in confusion: I'm not sure if it's yearbook, demo, or meant for mass consumption. Would I stop by them in Quincy Market and toss them a quarter? Probably. Do I recommend it to RARB readers? Not a chants.