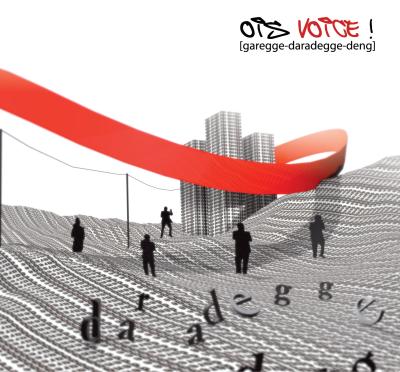 Yummy voices pervade this new album from Austria's Ois Voice. At its best, this album is spectacular. The rest of the time, it sounds nice yet puzzling, a collage of musical and linguistic distractions. Every sound but the kitchen sink seems to be in the mix. Techno, faux trumpets, doo-wop and europop all appear — sometimes all in the same song.

This eclecticism could reflect the group's youthful background. My German is lousy, but if I am reading the liner notes correctly then this group is mostly students. If that's the case, they've set a tremendous standard — big American college groups got nothing on this pro-quality sextet. However, there may be room for some artistic maturity, if the group stays together. Some of the songs change direction a few too many times, with a few too many quotations (or quotation-like riffs) to go down smooth.

First, the winners. Fia Di is beautiful, a love-song-sounding ballad by Austrian musician Hubert von Goisern. (I'm hesitant to draw too many conclusions about meaning because Ois Voice uses a non-standard dialect on their lyrics sheet, and I have only a sketchy grasp of even standard German). I also liked the opening "meet the group" song, particularly the duet in the middle section. That baritone has a gorgeous voice and doesn't get nearly enough play on the rest of the disk. "The Remedy" also scored high — I really liked the arrangement, and the English was passable.

But English was a liability elsewhere, particularly the gospel numbers. Isn't It Good was ruined by the tenor soloist's complete inability to enunciate "isn't it good that we can ..." when enumerating the blessings of Christ. Instead, the words came out "Isn't it gooo-ihcan" or worse. As a composition, this song is a little too praise-n-worship for my old-school tastes. As a performance, it sank like a stone. (Through no fault of originating group Return to Zero. And where are they these days anyway? I always liked them a lot). As for the other gospel number — it's hard for me to feel the spirit when "the Great I Am" comes out pure Popeye the sailor, as in "The Great I-Yam". That number also had Oe-oe-oe standing in for "oh-oh-oh", which set my southern American ears on edge.

The rest of the album lies somewhere in the middle of this span from the the sublime to the ridiculous. The German language cuts were an engaging mix of jazz and pop. Sunday Morning, the other U.S. cover, is fine if drab, just like the original. At least this version has some interesting suspensions in the arrangement.

Overall, this album is a find for collectors, adventurers and singers in search of inspiration. Everyday American listeners, however, may want to reach for something more uniformly accessible.

Genre-listically, I have no idea what to make of garegge-daradegge-deng, but technically, it's a lovely little album from vocal boy band Ois Voice out of Graz, Austria. Packaged in a case with eye-catching graphics and liner notes that neatly match the group's website, the music heard here carries a heavy bass, but demonstrates an otherwise keen understanding of a cappella music and its presentation.

garegge-daradegge-deng carries a diversity of music across its delightful 34 minutes, not the least of which is the intro, Ursuppn, the beginning of which to me sounds informed by Cosmos' Saullekts, but is interesting in its own right. This piece leads directly into Ansage, which appropriately translates to "message" or "announcement" in English. The lyrics, according to the translation of this song supplied to the RARB reviewers (i.e., they aren't included with the album; we were only given the aforementioned song and Fia Di in English) are quite cute: "No women perform tonight on stage / only manly voices have been engaged / The girls are waiting for us backstage / we hope, dreams come true!" The humor, however, is lost to this American listener in the style and arrangement. It's a lot less "Backstreet's Back" or "Hangin' Tough" (or any of a dozen songs in which the pop artists introduce themselves) and a lot more middle-of-the-album sounding.

My other qualm about the arrangements here is that everything sounds a little too similar, between the gospel-pop of Isn't It Good, barbershop-pop of Gospel Medley, ballad-pop of Fia Di, and pop-pop of The Remedy and Sunday Morning. Again, everything sounds fine — with the exception of an overbearing bass that's present on every song — but there's not a noticeable stylistic deviation between the different kinds of pieces. Musically, however, blend, energy, and dynamics are quite good, save for a few audible breath sounds.

I don't have a huge collection of non-English a cappella, but for me, Ois Voice is stylistically more similar to Maennerwirtschaft or ManSound than to, say, Vocal Six or muSix. It's a bit folksy, sounds rather American collegiate, and the English pieces have a slight affect to the lyrics' pronunciation. Still, it's a decent listen and a worthwhile buy for its delivery and occasional moment of interest (stay tuned to the light and lovely voicetrumental at the end of Regn in die Hoa and Latin-ish beat of Niglnoglnei).

Ever hear of Ois Voice? I hadn't before I got this CD, but I'm adding them to the ever growing list of European groups that I need to start paying more attention to. There's some pretty awesome a cappella happening on the other side of the Atlantic, and Ois Voice's album garegge-daradegge-deng serves as a great example of why we all ought to be listening to more of it. In fact, there are only two criticisms that came to my mind while listening to this album. One was minor and one was a little more substantial, but I have to say that overall this album is a pretty fantastic piece of work.

To be a little more specific about why I enjoyed listening to this group so much, it has a lot to do with their arrangements. They are charming in a way I couldn't quite put my finger on. They're not revolutionary (although the guys do throw in a handful of neat studio tricks that add a nice zip to some of the syllables), but I found them to be really effective and cool.

Now, the minor criticism first. All of the members of Ois Voice have nice voices, but they also have a really hard time singing in English on a few tracks. Vowels get swallowed, and the words can be a little hard to understand. I spent a lot of time trying to decide how to treat this in the review since it wasn't something that seriously diminished the quality of the music for me but at the same time was jarring to my American ear. I suppose I merely offer it as a heads up to potential listeners.

Accents aside, I do have one major criticism of this album, and that is that it sounds at times a little too polished. I certainly enjoy a nice clean studio sound, and in fact I think that the sound quality is one of the greatest strengths of this recording, however I think at times the music sounds sleek to the point of being a little soulless. A lot of rhythms sound obviously edited, and a lot of notes sound obviously tuned, sometimes at the expense of the performance. Would it bother a casual listener? I don't know, but I do think that this recording would have benefited from a slightly more relaxed approach in studio. Not every rhythm needs to be snapped to a grid. Sometimes you gotta just groove.

Overall, Ois Voice offers up a very nice sound here. I think with a little more focus on performance and a little less on studio perfection their next album could be flat out amazing.