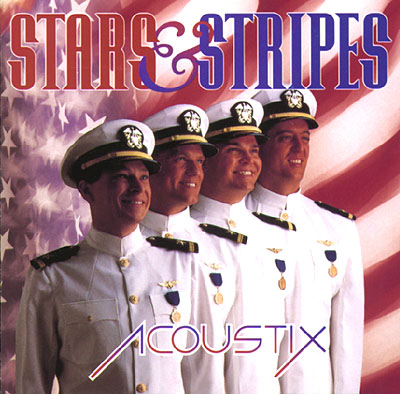 Never say there ain't truth in advertising. The quartet sent their classic CD, Stars and Stripes Forever to RARB for review, and it lives up to its advanced billing. This is the perfect gift for the patriot in your life — perhaps a relative or a veteran or both. Sentimental, musically pretty, darn nice barbershop singing with some terrific tags. That last makes it a must-listen for any barbershop fan, but a must-have? Might want to wait on that, unless the only way you can hear it is to buy it.

The American National Anthem is here, in lovely form. Acoustix does justice to star arranger David Wright's interpretation of The Stars and Stripes Forever. There's also God Bless America and So Many Voices Sing America's Song. And don't forget a semi-orchestrated cover of Lee Greenwood's God Bless the USA, with the brass, drums and strings of the American Pops Orchestra. I can't listen to this song without visions of rodeo grounds and women in shiny clothes on quarter horses.

Yes, friends, if your favorite barbershopper is Canadian, keep looking. They probably already have a copy of A Song Like Daddy Used To Play, or an uptone that sounds just like it. Besides, they probably aren't dying to hear a barbershop group cover the Manhattan Transfer's polka version of Unchained Melody. (No joke. Think the Beach Boys to a honky-tonk beat.)

No, the real reason to buy this album is cut number 7- And So to Sleep Again. It's not barbershop, either. It is a stunning eight-part jazz arrangement, sung fully and sweetly by Acoustix and women's quartet Panache. Not only the best track on the album, but it was recorded live — I didn't believe it until I heard the applause.

Aside from that, there are only two non-clichéd songs on the album — Stars & Stripes and the other duet with Panache, If There's Anybody Here from Out of Town. And I just don't think they'll carry this album into the mainstream.

Acoustix is simply one of the best barbershop groups ever. Stars and Stripes is truly precision singing. Huge crescendos, the most incredible blend you have ever heard, tags like they were meant to be sung ... This all-American standard album does just what it sets out to do. If the album concept of traditional barbershop versions of patriotic songs appeals to you, you surely will not be disappointed by this talented quartet.

Most of the selections have a dramatic and sweepingly broad sense of musicality, appropriate for songs of patriotic inspiration. It is worthy of mention that had Acoustix been one iota less talented I would have swung from loving this album to despising it. The songs all run the danger of drowning in sickly sweet sentimentality. In fact, whenever the quartet is joined by one of their guests, the result is a far less enjoyable, watered-down version of Acoustix' more honest and passionate delivery. Consequently, those tunes will appeal to those of a more forgiving ear. In any event, these guest spots are thankfully few.

A quartet of this caliber comes around only rarely. Acoustix transcends their genre through talent and musicality. To illustrate: I played one of their tags for a friend of mine who actively hates barbershop with a passion, but even she uttered a wide-eyed "wow" after the final chord finished ringing.

In their sophomore effort, Acoustix decides to go with a concept album, singing various forms of patriotic music interspersed with other uniquely American songs. The difference between this and their first album, The New Science of Sound is that they take more chances with song choices and with how they present them. Among their guests are the Vocal Majority, an award winning barbershop chorus, Panache, 1990 Queens of Harmony of Sweet Adelines International, and the American Pops Orchestra (UH OH, INSTRUMENTS!!! Purists beware! grin).

The blend and intonation is still picture perfect...the first track, The Stars and Stripes Forever, uses the original words that John Phillip Sousa intended. This song has arguably become Acoustix's signature piece, and it's well deserved...it stands among the most amazing pieces I've ever heard done, due largely to the incredible arrangment done by David Wright. But for an arrangement to work, it has to be well sung, and Acoustix delivers in spades. My other favorites in the album include the Blackbird Medley (mixing standards like Bye Bye Blackbird with the Beatles' Blackbird, very lushly arranged), the Manhattan Transfer's arrangement of Unchained Melody (in which tenor Todd Wilson shows off the effects of his recent..ahem...surgery.. grin), and This is the Moment which I believe is from the musical Jekyll and Hyde. The two numbers they sing with Panache is even more lush with the added vocal layers and timbres.

My one nit is that the cases where the American Pops Orchestra are used are in ways that seem superfluous to the music. The arrangement of God Bless the USA would have worked fine minus the instruments..in fact, they come in as if on an afterthought. And while the instruments make the final track So Many Voices Sing America's Song suitably powerful, personally I think just using the Chorus would have worked just as well. On Jazz Jazz Jazz the use of instruments was very effective...here it just seems unnecessary. And maybe that is the case and they just wanted to do it, which is perfectly fine.

Overall, though, this album will appeal to anyone who is either a barbershop fan or a fan of patriotic music...and maybe even those who don't fall into either category will enjoy the lush harmonies and the inventiveness of some of the arrangements. All in all, an excellent album.

If you are the sort of person who likes to wrap yourself in a flag and run through the streets, get this album. It's a big ol' patriotic, flag-wavin', firework-shootin', heart-swellin' barbershop shindig. If you don't dream in red, white, and blue, though, there are better CDs to have.

Acoustix is a darn fine group, that's for sure. This just isn't my favorite of theirs. Maybe it's that I'm just not personally a yankee doodle boy (too much time spent growing cynical back in my liberal-arts college days), but maybe it's that this CD doesn't have quite the heart that The New Science of Sound or Jazz, Jazz, Jazz both have. The guys are fantastic singers, but but but... It's frustrating — I can't put my finger on why this album doesn't thrill me. I should be able to better articulate my feelings... Only a couple times did I get that spine-tingling feeling I've come to expect from Acoustix (Blackbird & This is the Moment (the end of Moment is the single greatest moment on the album, without question)). And Unchained Melody is a toe-tapping fun-as-ever escape from the norm.

The addition of Panache didn't thrill me either. Here it is: I think my problem with this CD is that Acoustix has already set the bar for themselves so high by their outstanding work on other recording projects (OK, I know, Jazz came after this one) that even this pretty good CD pales in comparison. If you've been aching for a mostly-a cappella recording of your favorite "Go USA" tunes, this is the CD for you. Otherwise, stick to the other Acoustix recordings.

When reviewing Acoustix's album Jazz, Jazz, Jazz I had no idea I was dealing with one of the finest barbershop groups out there. Hearing this album absolutely proved that point. Smooth, smooth, smooth chords, transitions, tuning, recording, everything is practically flawless. It's the standard for great music of any genre.

What songs to listen to? Star Spangled Banner is amazing how they hand off the lead with an incredibly smooth blend. God Bless the USA has a wonderful, yet minimal orchestration added in the beginning that accelerates to greatness by the end. Unchained Melody is crisp; using an arrangement from the Manhattan Transfer, and bass Jeff Oxley sounds terrific on this one. This is the Moment is unparalleled in its greatness; a song I never imagined a cappella but works wonders.

Go get this. It's patriotic, barbershop at its finest, and it makes you (pardon the horrible cliché) proud to be an American.