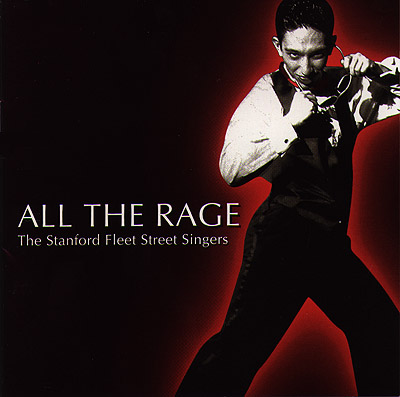 All the latest Fleet Street album takes is the right attitude. I picked up All the Rage after listening to several of those nice contemporary albums. Lovely stuff, but no energy.

This album opens with a blast of fun, doo-woppy, goofy energy. These guys don't just typify geek energy, they glorify it. I smiled and laughed — reactions sorely missing from a lot of a cappella these days.

There's some nice music here along with the gags, which are creative and musically good on their own merits. But I really loved the jazz intro to Greensleeves (from a song called Stolen Moments) and the beautiful delivery that followed. The other jazz success is the original All the Rage. Great work! Complex, interesting jazz, lots of rhythm, delivered straight up. You go, John Niekrasz, who wrote the music. Not bad for the five who teamed up for the lyrics.

More nifty stuff — new geek-based lyrics for the Gas House Gang's seminal arrangement of the William Tell Overture, renamed The Real Genius. Oh sure, it's not quite as crisp as the champion quartet they lifted it from, but it's close and it's funny and the sound effects are amusing. Time Warp and Daughter of Darkness are in character for a group that we are expected to assume plays Magic, goes to Trek movies on opening day and has memorized the trailer for the new Star Wars film.

It's probably time to retire Dancing Queen, which recording has now appeared on two Fleet Street discs and a BOCA, nice as it is. But what better note to end on then Mervyn Warren's arrangement of Joyful, Joyful, with a sterling solo by Nathan "Wheetie" Reed, the best of Fleet Street's generally good group of soloists.

From the opening chords of this album, it's clear that Stanford's Fleet Street Singers know how to make a mean CD. Looking at the liner notes, the fact that there's a credit for each track's producer alongside the credits for soloists and arrangers shows how serious this group is about the recording and production quality of this CD. That's pretty much where the seriousness ends, though, because All the Rage is a genuinely enjoyable and fun set of eleven tracks, ranging from campiness to children's songs, from humorous selections to a few strategically chosen more serious arrangements. The result is a nearly seamless whole, even more remarkable because of the extended recording schedule (the bulk of the album was performed by the 97-98 group, but 5 songs had backgrounds recorded by Fleet Street 96-97, and Dancing Queen was entirely recorded by the 94-95 incarnation of the group).

Unlike the last album review I wrote (where I expressed thankfulness at the lack of song-by-song comments in the new RARB reviewing system), I could easily say something unique about each track on this CD if I had to. On the humor front, Web Surfin' sets original lyrics to a Beach Boys-y Weird Al tune, and manages to entertain all the way until the Intel Inside riff that finishes the song. A few tracks later, The Real Genius sets more original lyrics to a Gas House Gang arrangement of the William Tell Overture; the words are Stanford-oriented, but they manage to keep the in-jokes minimal enough to retain the humor throughout (and they balance out the earlier Intel reference by including a Mac startup chime as one of the many sound effects during the song).

Camp abounds, as Fleet Street treats us to Tom Jones' Daughter of Darkness, ABBA's Dancing Queen, and that anthem of camp, The Time Warp. Lest you fear that these songs are included purely for their cheese value, let me reassure you that their arrangements (especially Dancing Queen and The Time Warp) are among the most interesting on the album, and they are performed with just as much precision and depth as any other track. And just when you thought it might be best to keep the kids away from this CD, there's a clever and cute version of the Joe Scruggs children's song, Deep in the Jungle. (If that doesn't ring a bell right away, think three monkeys, a crocodile, and a refrain of "nanny nanny boo boo" — does that help?)

Finally, the more serious songs on the album are unexpected choices as well as being skillfully executed. A jazz arrangement of Greensleeves, and a gospel version of the hymn Joyful Joyful (based on an arrangement by Mervyn Warren of Take 6) are welcome contrasts to the lighter stuff on the CD, but both still add a different kind of energy and exuberance to the mix. The one thing that noticeably disappointed me about this album was the large percentage of soloists who didn't do much for me one way or the other. (A couple of big exceptions to this are Nathan "Wheatie" Reed's interpretation of Joyful Joyful and Anthony "Spice" Basile on the Bee Gees' How Deep is Your Love.) Thankfully, the overall quality of the album is high enough that there's always something interesting going on, even if the soloist is simply average. Keep your eyes peeled for BOCA and the CARAs — I'm guessing All the Rage is sure to be well represented there.

The Fleet Street Singers just might make you wish you went to sunny Stanford. The album shows off comic ability, tight blend, and high energy. What stands out as absolutely exceptional is the production. Kudos to Bill Hare Productions for propelling this collegiate sound to radio-friendly status without losing its roots. I'm not saying All the Rage is going "crossover". I doubt it'll make the top 40 countdown. But it won't be for lack of production.

Ten of eleven songs on this album are comic. Not hysterically funny or captivatingly bizarre like The Bobs' early albums, but cute nonetheless. The only problem is that after a listen or two I can't imagine getting more out of these funny little tunes than the funny little punchlines that I now already know. That knocks down the repeat listenability factor. But, the energy could not be higher or more contagious and the musicality is strong too.

So while this isn't exactly a ground-breaking album. It is fun and if you are a fan of the group or of the collegiate comic style in general, All the Rage will not disappoint.

Web Surfin' is a great opener to the CD and sets the listener up nicely for what is in store from the Fleet Street Singers: clever songs with a fun personal touch, tightly produced and impressively performed, with strong soloists, excellent vocal percussion, and great energy. Even the liner notes are slick and professional; this whole recording project is an impressive one front to back.

Anand Desai does a beautiful job with Greensleeves — the combination of his tender solo and a smooth arrangement makes for a tune that gives me King's Singers flashbacks! Kudos to every soloist for their fine individual, and bravo to the rest of the group for providing a full sound underneath (and to John Nierasz and Matthew Hempey for their stellar production work). I know nothing of the group's other recordings, but I found it interesting to note that Dancing Queen is the FS Singers of 3 years prior. Hmm.

The Real Genius is the William Tell Overture (complete with fireworks) with lyrics custom to Stanford, though I feel there's some inside joke here I just don't get, and the words go by so fast (or are occluded by narration) that it's lost on me... The title track screams "House Jacks" to me — tight, groovy, hip, nice chords, and words like "Baby I'll get you groovin' / Maybe it'll keep you movin'" and "A passion like this / I can't resist / There's a fire in your kiss"...

Song selection is a nice variety that still somehow ties together nicely, probably mainly because the group has a nice reliable sound track to track. This will no doubt be a runner for several of the CASA awards this year, and I suspect it will do quite nicely.

Stanford's Fleet Street Singers, an all-male group hailing from someplace sunnier than where you live, have a history of consistently solid, normally exciting a cappella. On All The Rage, the bevested boys continue to tap into that tradition, but only for the most part. While most of their songs are solid so far as interpretation, tuning and blend, others fall flat through overmuch reliance on a humor which loses something in the translation from stage to recording.

The songs cover a somewhat daring range of styles, from outright humor to camp, from rock to ballad and the bizarre. The singers are clearly more at home the more upbeat a song is. What atmosphere they do manage to lend to less quickly paced or more contemplative tunes seems to tend more to camp than to heartfelt emotion. The ballads are sweetly done, but goofiness prevails as the general rule. The soloists are an exception to this, fitting right in with the mood each song would require. Still, the singers are funnier than they are rockin'.

Complementing the range of musical styles are some ambitious arrangements, making great use of the vocal ranges of the group and including some delicious deviations from standard syllables. As always, here too humor breaks through to the surface, with intertextual backing lyrics in Dancing Queen and self-referentiality throughout. There is a joking cleverness to what these guys do which makes the album fun.

In all, a safe bet. Perhaps it's just my predilection, but I would sooner see Fleet Street sing than listen to their CD; in the absence of audience, however, the CD is more than good enough.

CDs are $14 + $3 for shipping and handling. Albums will be sent Priority Mail and should arrive within three days of processing. Mail checks or money orders to: