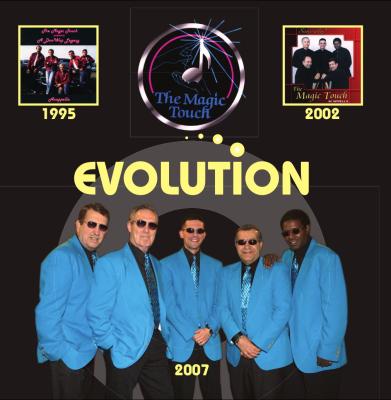 The Magic Touch's Evolution presents about an hour of classic doo-wop songs and an original track, Foolish Me, which fits right in. The five gentlemen of Evolution are unabashedly old school and they record old school, with none of the studio magic that pervades contemporary a cappella offerings.

The blend isn't perfect and there are more than a few issues with pitch, but these imperfections were, for the most part, slight enough that they did not interrupt my listening. There was one glaring exception, and I "tsk tsk" the men of The Magic Touch for letting it through: the soloist's high note closing out Life Is But A Dream is painfully off, an error made more excruciating by the entrance of the correct background chord.

The group's high tenor (reminiscent of Frankie Valli but with less control over the super high notes, see above) and their soulful baritone crooner provides most of the lead vocals. The soloists are perfectly fine for the material, but there were no jaw-dropping moments. The bass line could have been higher in the mix, and the tone lacks that resonant deepness of a true bass that can provide a strong anchor for the rest of the vocals.

While Evolution may be the result of the evolution of The Magic Touch over the years, musically no evolution has taken place. The arrangements are simple and there is nothing innovative about The Magic Touch's approach to any of the songs. This is straight-up, well-done, street corner doo-wop. While fun to listen to for a few minutes and to sing along with some old favorites like Love Potion #9 or Come Go With Me, the twenty tracks will drag on and run together for all but true fans of the genre.

The Magic Touch is an established doo-wop group that has weathered several personnel changes and several decades of existence. Their third album, Evolution, makes it obvious that they enjoy what they do.

Unfortunately, their zeal for doo-wop renditions of classics from the 50s and 60s does not exactly translate into an enjoyable listen. First, the album is much too long at twenty tracks, given the sonic and thematic cohesion of the material. A common problem with this genre, the ubiquity of "oo", "ah", and echoed lyrics trumps most listeners' (who were not musically aware during the 50s and 60s) attention span.

Tuning is a consistent problem. Many of the songs end weakly, so the poor tuning continues to ring throughout the reverb tail. Life Is But A Dream and Daddy's Home are the worst offenders, but the falsetto tags at the end of many of the songs throw the key into doubt.

I disagree with many of the production choices. The bass is thin, quiet, and muffled, and room sound is applied in exactly the same manner to all the tracks, which becomes pretty tiresome.

I do catch glimpses of The Magic Touch's enthusiasm for their music, but I can't recommend Evolution to anyone but friends and family of the group.

Close harmonies. Matching coats and ties. Your typical ICCA show? No, you've reached The Magic Touch, a doo-wop group that performs in and around the New York City area. If you live near there you may already be familiar with The Magic Touch. Or maybe you know of a group they've performed with: The Coasters, The Platters, The Drifters, The Impalas, The Duprees, or maybe even The Tokens (of that infamous "Lion" song). It seems the 50s were not at a loss for groups beginning with the word "the", and The Magic Touch are no different.

The group's recent CD, Evolution, is a form of false advertising for the casual listener: the doo-wop sound has not evolved at all since the 50s and 60s (although this group has undertaken many personnel changes since 1988). The tracks are familiar: Love Potion #9, Tracks Of My Tears, Stand By Me, Silhouettes, Come Go With Me, and many others you may not know the name to but will recognize immediately upon listening. The real question is whether or not The Magic Touch can stack up comparably with the aforementioned groups. The answer is yes and no, but mostly no.

The recording techniques are antiquated in comparison to recent offerings to the a cappella universe. It sounds like all the guys are recording together in one room with the lead prominently present in the mix, hoping for that one perfect take. Since this is the way doo-wop music was historically recorded, however, I can't fault them for this. Doo-wop supporters may argue a contemporary recording approach would strip the music of its integrity. I would go so far as to say the homophonic arrangements regularly enjoyed in doo-wop music are notably more difficult to tune and blend than the mostly polyphonic arrangements present in the contemporary a cappella community today. That's why to my ears it's always more impressive to hear a block chord on "ahh" moving in half notes than anything else. There is no greater sound in the human world than to experience a group of men singing block chords in tune; most of contemporary a cappella consists of mimicking instrument sounds that usually cut out the vowel and subsequently cut out the real challenge of tuning a chord. Different goals and different challenges.

That being said, The Magic Touch never consistently nails a song from start to finish. Sure, there are moments of brilliance where all five voices align in a perfectly tuned chord achieving overtones (the gold mine of block chord singing) above the first tenor and below the bass. More often than not though, these perfectly aligned chords quickly move to a chord that is a bit out of tune. Whether it's the first tenor a little sharp here or the baritone a smidgeon flat there, this album suffers tuning problems from start to finish. There is not one track I can honestly say is perfectly in tune. Strident backing vocals are consistently the culprit to many tuning issues with vowels that don't match and voices running on the ragged edge of each singer's range. The backing vocals would benefit by taking a step back on the volume of each song and focus on a smoother sound, which may in turn fix some of the tuning issues. In concert, listeners may be able to forgive some of these tuning problems, but without a visual to distract it's more and more difficult for The Magic Touch to escape these problems.

Soloists are very good, delivering performances which capture the character and soul of the songs and the time period they represent. Also a bright spot on the recording is the group's bass, providing solid rhythmic and in-tune root singing for the rest of the group to build their chords from.

At a whopping 20 tracks, the recording hints at the fact this CD may be more about capturing a group's current repertoire for fans to have and hold rather than for them to truly enjoy. Energy and a passion for the craft are readily available for the listener's ears on every track, and despite not-so-perfect tuning, The Magic Touch shows enough ability to turn out a very good recording next time around. They simply need to work harder to make sure their chords are tuned before hitting the studio. Unless searching for a large collection of doo-wop songs on one album, casual fans will want to take a pass on Evolution as it's not quite ready for mass consumption. Don't be surprised to see The Magic Touch put out a highly consumable album in the future as there is certainly a market for what they do. If they can fix their tuning troubles, I will be first in line to buy their CD.