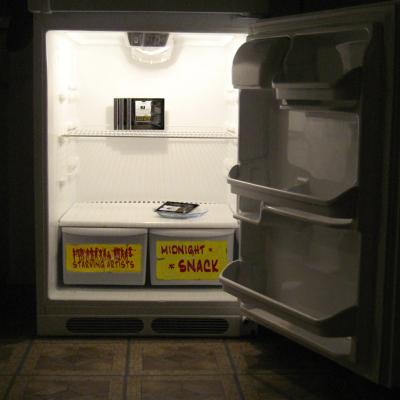 In reviewing their 2004 release Honestly, RARB's Rebecca Christie opened her review by saying "it's hard to believe the Brandeis Starving Artists are a full-fledged college group".

It gives me no pleasure to report that four years later, in evaluating their latest release Midnight Snack I found myself asking whether anything had changed.

What Mark Manley called "mediocre from start to finish" in 2004 is just plain poor in this day and age as the bar moves every higher for what can be considered average, let alone good or excellent collegiate a cappella (or contemporary a cappella in general for that matter).

There can be little question that the group's intentions were good. They sing with reasonable energy and enthusiasm and in my mind's eye, as well as via the snapshots in the liner notes, I picture a group of young men and women who very much enjoy making music together.

But at the end of the day, that music is just not very good. Pretty much all of the bedrock elements of ensemble singing — tuning, blend, rhythm — are suspect at various points and too often, simultaneously. Arrangements range from the ill-advised — a group with bountiful tuning problems would do well to stay away from arpeggiated and/or "scattered" arrangements and stick to those that have more flowing lines for each voice part — to the super-simplistic. VP is circa 1990 with no bass drum to speak of and snares, toms and cymbals that sound all-to-similar and sibilant. Technical credits are unimpressive with the group sounding like it was recorded either as one ensemble or in complete voice part sections, leaving fewer options for post-production tweaking and editing and allowing too many glaring errors to remain in the finished product.

Simply put, I was hoping this midnight snack might be a guilty pleasure. Sadly though, it's just one you'll regret in the morning.

What is it about No Doubt covers that cause a cappella groups to go bonkers with background syllables? The answer to this question might explain the phenomenon that is Midnight Snack, the latest release by Brandeis University's Starving Artists, which opens with Spiderwebs. The track sets the stage for an otherwise competent album that is done in by curious backgrounds.

Rather than evoking the original material, the arrangements on Midnight Snack throw a compendium of (exceedingly) random vowels at the general chord structure of the song. The aforementioned cover features a prominent "whah" syllable. "Whah" as in the sound one makes when attempting to imitate a baby. Other snippets sound like a baby trying to imitate an adult. Holding Out for a Hero gives us a run of "bum-thoom-da-be-do-da-ba-doo-YEAH!-YEAH!"

The arrangements are only partly to blame here, and one gets the sense that they are not always meant so seriously (the most prolific arranger even manages to work his own name into So Much to Say). The Starving Artists render each flight of musical fancy without any sense of irony. If the arrangement says "dee", by golly, you're getting "dddddeeeeeee".

The album sounds pleasing and contemporary enough, though one senses the folks at Wellspring Sound didn't know quite what to with the busier moments. Some sections seem to feature ever voice part at equal volume, which further inhibits the listener from engaging the album.

This is a shame, since the Starving Artists have some legitimate vocal chops. I think a friend of the group should casually intervene here: "Dude, Eli, you sure can wail on some Dave Matthews. However, I think the song would be better if the girls weren't oompah-ing behind you. Also, I picked up a bottle of Cuervo."

The soloists hit the nail on the head more often than not. Richa Sahay clocks in a subtle, smoky rendition of Lauryn Hill's (rendition of) Can't Take My Eyes Off of You. Olivia Mell similarly delivers the goods on Fever, the strongest track on the album, and the group handles tricky chord transitions and dissonance with aplomb. This leads me to wonder if vocal jazz might not be more the Starving Artists' wheelhouse.

More so, I think this group needs to step back and decide what they are trying to accomplish. Sophisticated arrangements (their words) should be utilized to a specific end, articulating musical ideas and establishing contrasts. The Starving Artists have shown us that they have the tools to make an outstanding album, and now it is time for them to do so. Maybe they can name it Brunch.

The songs that I thought were almost BOCA-worthy were When I Am King with soloist Josh Mervis, So Much to Say with soloist Eli Matzner, and Almost Honest with soloist Logan Jerger. I rated these songs as "high 4s", almost 5s. The soloists were very good, and the background vocals were in tune and appropriate. The two songs I considered particularly poor were The Chain and Holding Out for a Hero. In The Chain, the voices sounded out of tune in just about all of the sections where the three main parts (one male, two female) change together with constant harmonic intervals. Holding Out for a Hero was seriously out of tune from the start, and the soloist had both an annoyingly fast vibrato and an annoying habit of dying on the "o" of "hero" nearly every time. Both of those were "Can I please fast-forward this track already?" songs for me.

As another example of the inconsistency of the album, some of the tracks have a very nice balance between soloist and backup vocals — I'm thinking of Can't Take My Eyes Off of You, and When I Am King, for example. On many others tracks, however, the background vocals are a bit (or sometimes more than a bit) too loud — these tracks include So Much to Say, The Chain, Holding Out for a Hero, and These Words.

Continuing with this theme, I thought some of the arrangements were quite interesting — So Much to Say had a very interesting background texture, as did Fever (although I thought switching to a major chord on the last note was a bad choice). But other arrangements were mundane — Spiderwebs had unimaginative background syllables, Something to Talk About was not very interesting, Come On Over Baby had a unduly repetitive bass line, and I didn't really like The Chain's arrangement at all.

The song that was hardest for me to rate was These Words, with soloist Ali Sternburg. I really wanted to like the song — the soloist had an interesting voice and the arrangement was similarly interesting. However, the soloist got a bit "shouty" at times and (as already mentioned) the background vocals were frequently too loud. In the end, I decided the strong points didn't completely make up for the weak points and so I gave it a 3.

In a final miscellaneous observation: the liner notes credited "Julie" with the solo on Come On Over Baby, but didn't say which Julie it was (there were two listed as group members). You really should have included at least a last initial, Starving Artists!

I would only recommend this album if you have some personal involvement with the group and/or university, or if you have a particular interest in/enjoyment of some of the highly rated tracks. Otherwise, you can skip it without missing too much.