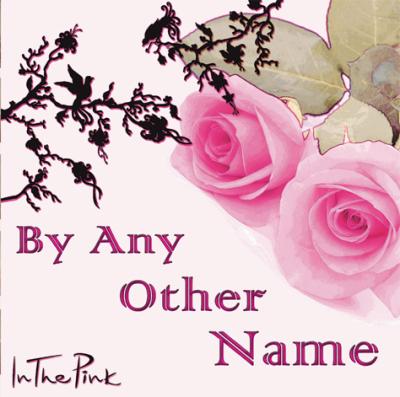 There's no way around it; By Any Other Name, the latest album from Oxford University's In The Pink, is a rough listen. It's a shame too, because the group seems to have a lot of enthusiasm and a good core of leadership. Getting Bill Hare involved with the production was a wise decision, but this album is proof that even the best producer can only do so much with what he or she given. A severe lack of energy, poor ensemble sound and delivery, and mediocre soloists are three major things that contribute to the downfall of this album.

At the core of this group's problem are vowels. Almost everything sounds overly choral and poorly matched. The ladies of In The Pink have some work to do towards creating a cohesive ensemble sound. Not surprisingly, the tendency toward darker vowels and sharp ending consonants works more to their advantage in songs with a choral edge to them (A Nightingale Sang In Berkeley Square). In the pop/rock genre however, they stick out like a sore thumb. A prime example is in Got To Get You Into My Life where the soloist adds the "j" glide to the word "knew" of "you knew I want to hold you," resulting in "you nyoo I want to hold you".

Inappropriate vowels and diction would be easier to overlook if these songs were bursting with energy. Sadly, they are anything but. Everything just sounds too proper. The most upbeat tracks have a cute, bouncy vibe to them, but nothing at all like the grit required to make a song like We Will Rock You believable. Cute may cut it live, but on record this kind of sound simply comes off as cheesy.

To the group's credit, moments of By Any Other Name show some promise. Suzie Merchant's percussion is solid, and the arrangement of Both Sides Now shows promise. Ms. Merchant is clearly In The Pink's current mastermind, and I hope that she continues to refine and share her abilities with the rest of the group.

More and more I find myself offering the same comment to groups: good production is nothing without energy and believable performances from the group. With this album, In the Pink demonstrates knowledge of current a cappella recording, but none of the talent necessary to make waves in the community. With more focus on vowels and making their sound match the style they are singing, I think In the Pink has the potential to make a much better recording than this.

Running the style gamut from WWII-era romance movie soundtrack to brassy sixth grade chorus, with deferential leads and diffident backing vocals, Oxford University's In the Pink sounds like a group in identity crisis.

The tuning and blend problems are severe throughout By Any Other Name, and the group has not done itself any favors by adopting a soprano-centric arranging style. The sopranos sit recklessly forward in the mixes, which, coupled with an already harsh mixing treatment, makes for a grating listen. The ABBA Medley especially illustrates the need for the ubiquitous high descants to be pushed further back, and transposing leads up into the sopranosphere is generally not a good idea (All Star, Happy Ending), with very few exceptions (Wonderwall, from UGA's Noteworthy is one).

The songs with major transitions — all the medleys and I Will Follow Him — suffer more as they unfold. The tuning on Got To Get You Into My Life makes the song unbearable, and the same could be said of the delivery on I Will Follow Him. Picture an amphetamine-crazed choir director and her willing subjects, happy and oblivious. The ABBA Medley's energy level sinks lower and lower, making a six-minute song feel like twenty.

I find this level of stylistic disregard inexcusable for a collegiate group. The background singers seem to be singing for themselves, with minimal effort toward blending. The leads are timid, constantly vacillating between chest and head voice. We have to wait until the tenth track on the album to hear a singer take any kind of ownership of her lead. There are also some misguided lead assignments, especially in the ABBA Medley.

In the Pink clearly feels more at home on songs like A Nightingale Sang In Berkeley Square — perhaps the only song on the album that finds itself, stylistically, whereas their discomfort with other styles manifests itself in persistent rushing and sloppy execution of background lyrics.

Do not, I repeat, do not buy this album.

Now that we've gotten that unpleasantry out of the way, we can talk about what In the Pink can do to improve upon the mistakes of By Any Other Name and make a solid album the next time around.

By Any Other Name is just not very good, but what makes it unpleasant can be fixed with In the Pink's willingness to get their hands dirty, to admit they can't do everything yourself, and to push forward with an optimistic look at their group as a whole. To be certain, In the Pink has some talent. Honestly, who can really go from starting a group to releasing a twelve-song album without some talent? What In the Pink needs to focus on is how they can best utilize their singers.

Let's start with the obvious. In the Pink is an all-female group, yet they don't do a good job of choosing great songs to show off the fact they are a female group. We Will Rock You? All Star? It isn't until track 8, Both Sides Now (Joni Mitchell), when In the Pink is at its best. And frankly, Both Sides Now would probably be a ballad-filler song by most good female groups. They should listen to this track over and over and reflect on the choices they made in the arrangement, solo choice, and expression and try to use it as a baseline for future endeavors.

Task 1: Compile a list of great female artists you would die to cover.

Next up, let's tackle arranging. I'll admit, arranging for female groups is a tough task to do successfully. The reality is that In the Pink often has a span of two and a half octaves separating the Alto II's and Soprano I's. This is a recipe for disaster with even the best of singers and seasoned groups. When you have your altos in the basement and your sopranos in the stratosphere, you might as well be throwing paint at the wall, hoping you'll end up with art. Tuning is just plain tough when you put your singers in this predicament. In the Pink should pick a key their singers can be successful in and then tighten up those chords (keeping all voices within a 3rd or 5th of each other at all times) and only move out of this comfort zone for effect when you know your singers are capable of it. The only voices where it may be acceptable to have an interval larger than a 5th between them is with your Alto II's and Alto I's where the bass line may require an average of an octave between them. Female groups shouldn't feel pressured to have to replicate the voicing of male and co-ed groups. In an age when female groups can utilize the octavized alto line through production, there's no reason to keep your lowest singers in a range that's detrimental to the tuning of the group. I'm convinced that 80-90% of the tuning problems on By Any Other Name (and this album is severely out of tune) are a direct result of inexperienced arranging.

Task 2: Get great arrangements that your singers can sing successfully. It's okay to purchase arrangements from more experienced arrangers and you'll learn a lot in the process, too.

Provided you've chosen great repertoire and have great arrangements your singers can be successful performing, the music direction should be a lot easier. Still, because In the Pink is relatively young (four years old), hiring an outside director may be a wise choice to help shape and mold the talent of these young ladies into a final product that will shine far above whatever's been captured on this recording. At the very least, they should utilize their fellow Oxford friends Out of the Blue and bring in their director from time to time to critique and work with the singers and arrangers.

Task 3: Hire an outside director for a few years until your group has a solid foundation on what is expected to be a very good singing ensemble. I suspect they may not know what it takes to be a great group.

There are two very good things on this album; the vocal percussion work by Suzie Merchant and the octavized alto lines, presumably done by Bill Hare. I could go on and on about all the various problems residing on this album, but I don't think pointing out specific moments of horrible tuning is the way to better a group. I really believe if the three areas above are addressed, In the Pink will have an exponentially better product the next time around. They obviously love singing, and that's the most important starting point.