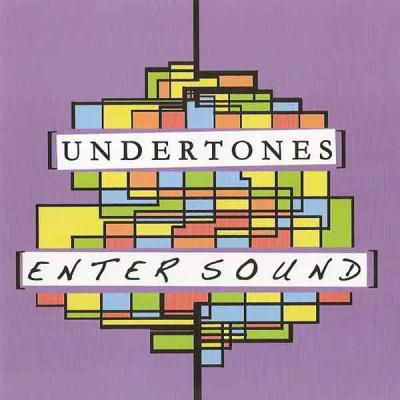 Here's a game you can play with the Northwestern Undertones' latest album Enter Sound: pop it in and try to guess which track belongs to which of the seven big name a cappella producers who contributed to the album. Production isn't credited for each song, so you'll have to guess by ear. Unfortunately, playing the "guess who" game is probably about the most fun you're going to have listening to this recording. Everything beyond the production, from the soloists to the arrangements to the backgrounds, falls totally flat.

It doesn't help that the track list of Enter Sound is a veritable parade of the most overdone collegiate tunes of the last five years. Nearly every track has been featured on BOCA, won a CARA, or been recorded by another prominent ensemble. Case in point: I thought the Undertones' version of Get Set was okay until their album ended, the next disc in my car came on, and I was blown away by the Hyannis Sound's much fuller and powerful rendition off of Shirt, Tie, Khaki. I would be less inclined to make this admittedly somewhat unfair comparison if the Undertones' arrangement or delivery brought anything new to the table. Unfortunately it does not, and as a result they pale in comparison.

As I mentioned before, seven different producers contribute work on this album including Tat Tong, James Cannon, Bill Hare, Ben Lieberman, Darren Rust, Dave Sperandio, and Ed Boyer. I have no idea why the group decided to go this route and spread the vision for their album so thin across so many different people. The "use everybody in the a cappella yellow pages" technique has been tried before, and history has shown that cramming star power into an album is not an automatic recipe for success. Even the big names can't make something out of nothing. To be the best, you have to sing well.

If anything, the multiple producer approach here contributes to a sound that is extremely inconsistent and not at all cohesive. The character of the album changes on a song-by-song basis, and some mixes are clearly more polished than others. Even simple things like volume are all over the place. Tracks 1 through 3 are around the same level and then BAM!, So Are You To Me booms like an airplane during takeoff. The liner notes don't credit any single person as producer on this album, and maybe that's the problem. Next time around, especially if they decide to use multiple engineers, the Undertones need to present a much more consistent overall vision, rather than just letting each engineer stand alone with his own sound.

The eclectic production doesn't do this group any favors, but in the end the lackluster singing and arrangements are what bring this album crashing to the ground. The background vocals are dull and most of the soloists sound awkward, like they're pushing too hard to match the originals without bringing any of their own character to the table. Arrangements are uninspired and interesting only occasionally when they are buried so deeply beneath the production that the voices are barely recognizable (Sweet Child O' Mine).

I don't mean to make it sound as if this group were devoid of talent (they aren't), but for me their approach to this album was unsuccessful. Too much focus on production, and not enough on creativity, musicality, or vision have turned what could have been a fine album into essentially a sampler CD for all the major a cappella producers. If the Undertones can bring more of themselves to the project next time, then I think they'll be able to make something much more personal and engaging.

Hmm. Undertones. Enter Sound. What is this?

Let's see. Alanis Morissette cover? Check. Sweet Child O' Mine? Check. 115th cover of Breathe? This is collegiate a cappella alright. They even end with that siti-boo-manya-whatever song from The Lion King. Here's betting they have an in-joke about some food item upon which members of the group found themselves dependent, and so felt compelled to thank in the liner notes.

(For what it's worth: Vitamin C cough drops.)

You've heard this album before, and not just because you probably mixed and recorded it (the Undertones credit no fewer than nine mixers and producers, almost one per song). This is a cappella by the numbers. Take songs nobody could screw up. Reconstruct them faithfully with lots of syllables ending in "ah". Impress parents and alumni.

Let's discuss what works. Fallon Pyles works. She gives us one of those "delicate" solos on the recklessly overproduced So Are You To Me. More importantly, she is the only soloist who seems to understand the irony of When I Grow Up. I can hear the sneer and I like it. The remaining soloists offer workmanlike semi-evocations of the original material.

You Oughta Know works. Given the countless iterations of this cover, it is nice to hear one that accentuates Flea's crucial bass hooks. Cathy Breen sounds like Alanis Morissette, which is helpful for obvious reasons. No points for guessing whether they censor out the naughty word, though the Undertones do so in a most curious fashion.

In spite of the surfeit of cooks in Enter Sound's kitchen, the album hangs together pretty well. Bass saturates the sound (does it ever) and the percussion samples establish a laid back groove. Doesn't really work for Not Ready To Make Nice, which sounds altogether congenial despite the subject matter. It also doesn't work for The Lion King number, which relies on a bouncing rhythm to carry it from its lush opening to conclusion.

(Quick aside to the soloist on the latter track; it's "planet" not "planeeeeeeeeeeeeeeeeeht".)

It really doesn't work for the disastrous Guns N' Roses cover. On an album that makes no pretense of eschewing the talents of its crack team of producers, there really isn't any excuse for biffing the most important hook on the album. The lead sounds nice enough but isn't really up to Axl's intensity. The whole track is Squaresville.

I'm sure Guns N' Roses would be thrilled as kittens to be featured on an album with a lavender pastel cover.

A close listen to the album will reveal the presence of arrangements underneath the bass droning and sampling. They do little to reward more sensitive ears. The Garbage cover has some nice things going on that bolster an already impressive track. Other than that, it sounds like an a cappella group is fiddling around in the back of the studio.

Sound familiar? Of course it does. The Undertones need to do something wholly their own before I can recommend their work. A couple of great solos and a couple standout tracks are enough to keep me listening but should not be enough to have you buying.

The Undertones' latest release is a solid effort, complete with high-energy performances and considerably talented soloists. Enter Sound has much to offer the listener and does so by providing a generally up-tempo set list to ensure that you won't lose interest. It's great to see that six different group members contributed on the arranging front (and out of only ten tracks!), and the compositions they provide are, on the whole, functional and interesting. Good use of bell chords on Perfect Day, for example — I always appreciate an arrangement that's written to help drive the song on its own. See, you don't even need sampled percussion when you have charts like these!

Another high point on this album is the solo talent. Brittany Bookbinder and Nate Lewellyn are the true standouts, but there isn't a weak link in the lot. There are, however, a few things about the soloists. For one, the pitch correction gets dangerously aggressive on some tracks, namely So Are You To Me and You Oughta Know, to the point that the long held notes are stripped their natural timbre. I'd suggest spending a bit more time playing around with the pitch correction levels next time; you'd be surprised how little of it you need to lock the vocals into place! Also: why do we only hear two guys? Mr. Lewellyn bookends the album, and Matt Edmonds provides a solid lead on Bless the Broken Road, but every other track is fronted by a woman. I would love to have heard more variation. But I guess, in the end, I can't complain, because the women all show up and deliver.

Something that did kind of bother me as I listened through was that Enter Sound feels at times less like an album and more like a collection of songs produced by different people over a large span of time. I could be totally wrong about this, yet the CD booklet credits seven people for the mixing process, and I suspect that there may have been too many cooks in the kitchen for this one. Different tracks have considerably different sounds. On Not Ready To Make Nice, for example, the block sounds very thin, the bass is tucked in the back, and the solo really sticks out. Compare this to the robust Circle of Life, which thrusts forward a wall of sound and rich resonance, and you'll wonder if it's the same group in both numbers. It's also a crapshoot on the dynamics front. Some songs have really great contrast — Sweet Child O' Mine and Circle of Life really push the fortes and pianos, and it makes a huge impact on the end result. And some stay on the same dynamic plane for the whole track, such as So Are You To Me, and suffer as a consequence. Why is this an issue? Well, it's important if you want to establish a consistent group sound and identity. I know the Undertones have good soloists and good arrangers, but I don't feel like I've necessarily gotten an accurate picture of the group as a whole.

Even so, the appropriately short and engaging track list will draw you in and keep you satisfied. Stylistically, Enter Sound sounds like a lot of modern day a cappella, but it comes out a bit ahead of the curve in execution. If you prefer minimal production, I'd stay away, but for the other 99% of you, it's a pretty solid choice. Oh, and if you're a hardcore Disney fan, just skip ahead to track 10. You might think it's worth the full price on its own.