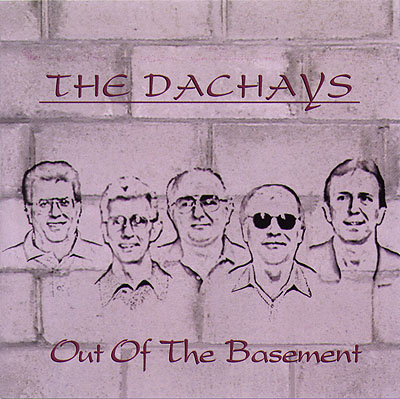 I'm glad that we don't use a thumbs up/thumbs down system in RARB - the stress of giving every album only either a "buy" or a "pass" would eventually get to me. However, if you've ever watched Siskel (rest his soul) and Ebert, you know that for all the times they completely agreed or widely diverged with each other's opinions on a particular movie, there were also those times where their comments seemed to be in pretty close agreement but the film got a "marginal" thumbs-up from one critic and thumbs-down from the other, or one of them loved it and the other was just above lukewarm, but it got two thumbs-up (to be forever trumpeted in the movie's ads from that point onward). In any case, my point is that with Siskel and Ebert it was really all about the comments, and with RARB's streamlined 5-point scale, comments are still the key to any review.

That said, you may have noticed (or not, and if you didn't I won't take it personally) that I've given this doo-wop CD the same overall score, a 3, as the last doo-wop album I reviewed (Alexx's Street Elite). The Dachays are a more enjoyable listen, however; unfortunately, that's not saying an awful lot. The Dachays possess a smoother sound than Alexx, and their five singers are more endurable to listen to for the length of an album. There are even a couple of tracks that come together and show the potential for solid singing the group is capable of (At My Front Door and the CARA-nominated I Go to Pieces). On these songs, the lead shows personality, tuning stays in place, and they even get your foot tapping a bit.

There is a reason, though, why only one track was nominated for a CARA and not the full album. Tuning problems abound, but the fact that a few tracks are pretty acceptable points to sloppiness more than incapability. Even that doo-wop staple, the falsetto "ooh" that often carries a song to its conclusion, which is sometimes so sharp on this album that it's painful, is at other times right where it should be. The Doo Wop Medley is an interesting idea but spottily executed — snippets of a bunch of doo-wop songs strung together, often with no lead line. But again, tuning is all over the place, some of the transitions are abrupt, and this lack of focus shows when they need to resort to a fade-out to end the song. All in all, aside from the two decent tracks I mentioned earlier, this album is a consistently unsatisfying listen. I can't really recommend it to the general a cappella fan, and even a doo wop fan or singer, while they might get more out of the CD's occasional good moments, would probably find even more flaws to lament.

I try to start off with positive comments. Number one: I'm very glad that the Dachays are keepin the faith alive with doo wop. That street corner sound can get lost in today's technologically enhanced recording world. Not here. Second: Luna Sound does a fair job recording that raw quality. Unfortunately, that's about where my compliments end. I really like doo wop, but this album was just painful to listen to. Tuning, blend, soloists, creativity were all weak throughout the entirety of Out of the Basement. But, perhaps the number one killer is that this album is so totally lacking in energy that I could literally feel my life force being sucked out of my body. I like a laid-back groove as much as the next guy, maybe even more. But let's not confuse laid-back with comatose.

My advice to the group: keep at it; keep the doo wop sound alive; put your hearts into it. My advice to the public: give the Dachays some time, and in the meanwhile, stay clear of this album.

I must admit I know little to nothing about this group, as there are no liner notes about the songs, the group, nothing. Therefore, all I have to go on is what I hear. The Dachays are your average, run-of-the-mill doo-wop group. From the caricature on the front, they range from early-to-late middle-age in age. The same person sings lead each and every time, and no one ever changes part.

One big problem I have with it, and this may be a personal taste thing (but then, aren't all reviews?), but everything feels like it's the same tempo, be it ballad or up-tempo. I really think some of the up-tempo numbers could be more up-tempo...I and a lot of my friends like their doo-wop fast and furious. Blue Moon almost felt like a dirge...that may have been the original tempo, but it felt slow.

The main problem with having the same person doing lead, first tenor, etc, all the time is that the inherent problems are always the same. The lead, in particular is problematic is that he's often not in tune with himself, let alone the group. Inconsistency in his intervals cause him to sing out of tune fairly often. The bass doesn't sound like he's a real bass more than a baritone that has a low range..he lacks the true bass doo-wop sound..that big, full sound that slightly over-balances the rest of the group.

The group in general has tuning problems. (I have yet to hear a group that specializes in doo-wop that hasn't had significant tuning problems.) There are some good moments, but the singers aren't matching each other in their interval jumps. More significantly, their blend seems off at times too... and in a doo-wop group, blend is everything. I think for an album the song selection could have been better planned...I know I vi IV V is a staple of doo-wop but too many of the songs sound similar to one another, which makes the album a little hard to listen to...some different styles of doo-wop might have made the album a better overall package in that regard.

They generally have a lot of fun, and they're not horrible sounding...but considering this group was nominated for a doo-wop CARA award, I expected much more than what I heard...which, unfortunately, may say something about the state of doo-wop in today's world.

If you had been in a men's quintet in high school that sang for friends in the hallways and before pep rallies, and then got real jobs and lived in the suburbs, finally getting the group back together at your 25-year high school reunion, you might end up with a recording like this.

Song selection is OK; there are some good ol' doo-wop favorites we all know and love. But tuning is weak throughout, energy is lackluster, tempos are often drowsy, and there's really nothing to set the Dachays or their album apart from the other casual Sunday afternoon doo-wop groups out there. Liner notes are nonexistent, which might just drive you crazy when you recognize one of the songs in the Doo-Wop Medley but can't remember who recorded it originally. The medley starts off as the most creative arrangement on the CD but suffers (as do many of the tracks) from strikingly weak tuning, and then just when they get things rolling, it fades out in the middle of Duke of Earl. I thought my stereo was on the fritz when it happened... Hmm.

"But," you might say, "wasn't one of these songs nominated for the Best Doo-Wop Song for '98?" Well, yes. That was I Go To Pieces. The thing to keep in mind, I would wager to guess, is that perhaps there weren't too many doo-wop CDs released in '98. That's my theory, anyway.

Pass on this CD; go get the Best of Doo-Wop boxed set to hear your favorite old tracks instead.

The Dachays give us a solid doo-wop album, all in all well-performed but also in general unremarkable. Doo-wop is doo-wop, and it's what these five gentlemen sing, with clear love for the medium but also with the lack of innovation that fondness entails. Interpretation is fairly strictly limited to the original sound, and I must say that some other covers of the same tracks have been carried out with more energy.

That said, the Dachays have a lot to offer. With only five voices they develop a remarkably consistent sound. I am particularly impressed by the tenors, who sing with a richness and warmth rare at such altitudes. The bass unfortunately sounds more baritone-ish, bottoming out relatively high and only serviceably sounding those lowest notes.

As I end up saying frequently, it seems, this is a group which would be wonderful to see perform, but must lose something of its energy in the translation to disc. I can't speculate if this is a problem in performance, but rhythm sometimes falters on this album; I get the sense that some uncertainty still reigns among the members as to how certain songs should sound (My Juanita, and strangely, Blue Moon).

I can't recommend this album as against other doo-wop discs available, some of which offer a stronger sound, with more ringing harmonies. At the same time, this is a solid album, enjoyable in its own right.

Out Of The Basement may be purchased in person or by mail through: