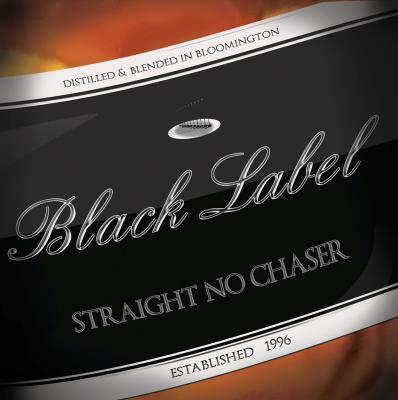 Black Label is yearbook stuff. There's some good in there but there are also some moments that are unfortunately cheesy and unoriginal. When it all shakes out, things are on the low side of average.

One plus is that the lead voices are all very pleasant. Yes, there's a glee club sound to several of the singers, but nonetheless, the tone color is rounded and open. The licks are pretty good. The engineer and producer clearly know how to capture lead warmth well, and this too is a plus.

But the cheese just ruins the experience for me. Bass speaking solos. Yes, I'm serious. Like "Girl, you know I love you..." That kind of cheesy. And not just once. This dairy assault can be found on both Can You Stand The Rain and So Much In Love. If it's supposed to be tongue-in-cheek, that doesn't come across. There's no irony here, nor is there a reinterpretation. It's just that cutesy '50s shtick.

Of course, when they perform live, perhaps they add in that little wink that says, "Yeah we know this is cheesy, but isn't it funny that we do cheesy stuff?" And that would add a completely different dimension to the experience. But if so, that self-awareness doesn't translate to this recording.

Song quotes are an age-old a cappella technique. If handled with finesse, a quote can add meaning to both the primary song and the quote; it can reveal a non-obvious musical connection or place a lyric in a new light. Makes Me Wonder gets a little Umbrella added in. Bad Mamma Jama gets P.Y.T. and Freak Out. These aren't bad choices by any stretch, but nonetheless they don't add much and consequently feel a little tacked on.

All that said, production could have saved the entire recording, as it does with nearly all the strongest collegiate a cappella. Here though, the production is completely bereft of all the technological advances that a cappella has made in the last ten years.

Nowhere is this technological failing more painfully evident than in the vocal percussion. Songs like Bad Mama Jama are seriously hurt by anemic coloring. In 29 Ways, the kick ... ironically, has no kick to it. Bless the Broken Road as gentle as it is, still desperately calls for stronger sounds throughout. Apologize is about average overall, but the high hats are distracting and don't really sound very much like high hats. How easy it would have been to fix at least this basic element of the genre.

If this kind of VP is an artistic choice, — a choice of naturalism — it's not a strong or entirely consistent one, but I rather suspect the engineer of simple ignorance — not of miking lead singers, but of the altogether different art of miking and making contemporary a cappella. Some odd back-up mixing choices and autotuning artifacts (Apologize being the worst) just cemented my grumblings. The mic and preamp sound lovely though. But a (suspected) Neumann mic and a Neve Channel are not enough.

The arranging is not distracting, but neither is it all that noteworthy. The song choices range from mere imitation (So Much in Love) to, well, kind of stupid (Love Sucks) to some really good songs (Fly Like An Eagle, Broken Road Apologize, Bad Mama Jama).

Black Label comes across as more about croonery than artistry. The ability to sing well is something these guys do bring to the table and for that they deserve praise. I look forward to the next release when all that talent can be shown in its best light with greater attention to both artistry and production.

If you find yourself bemoaning the hyper-produced state of today's collegiate a cappella, the latest from Straight No Chaser is a good choice for you. Old-school in a good way, Black Label shows that decent singing never goes out of style.

Black Label favors natural sound over fancy production, and the voices take front and center. SNC has the singing chops for this approach, especially with the aid of generous compression and reverb, though there are occasional stray chords that don't lock 100%. Blend is good, though I could have used some more bass, and the tenors get stuck in the stratosphere a bit too much. Reproduction is decent, though occasionally lacks clarity, sounding muddy and garbled. The overall result is a fine musicality, but a lack of the precision and consistency of today's studio albums.

SNC knows its sweet spot, and the playlist is loaded with mid-tempo R&B and a aca-classics like Bless The Broken Road and So Much In Love. I found the track list a bit monotonous, but I don't blame these men for sticking to a winning formula. Arrangements favor traditional block chords and lots of open syllables ("oo", "ah", and "oh" must account for over 75%), and arrangements do a nice job of creating an inoffensive canvas where the soloist can shine.

And in typical SNC fashion, the soloists glitter like Paris Hilton's jewelry closet; it's clear that the smooth, suave, and silky-voiced leads are the main attraction on Black Label. They probably send performance schedules to Bloomington EMS in order to have ambulances on call to pick up swooning concert-goers. There are no duds, but standouts include Drew Kipfer and Jesse Towns on the understated and lovely Can You Stand The Rain, and Corey Frye who sounds effortlessly brilliant on 29 Ways. This amount of solo talent on a collegiate disc is rare.

When SNC does deviate from its man-diva groove, the results are subpar. Makes Me Wonder lacks the edge and grit it needs, with an especially cloudy, poorly-articulated background (though I liked the chunky percussion). Fly Like An Eagle is well-intentioned but poorly tuned, and the rhythms of the various parts felt at odds throughout and the groove never clicked.

SNC has stood firm in the face of a cappella's über-production revolution, and Black Label rewards the listener who can appreciate the beauty in the non-perfection of the human voice. What SNC lacks in consistency it makes up for in beauty, with enough gems and moments of brilliance to make Black Label a worthy listen — and hopefully a worthy model to emulate.

It's likely that 95% of the people who read RARB reviews know the story of Straight No Chaser; how the college group re-formed years after they graduated from Indiana University due to the wild success of the YouTube video The 12 Days of Christmas and signed a record deal with Atlantic Records. Well, this album is from the other Straight No Chaser — the one that is still at Indiana University. I will just refer to them as SNC from now on. Oddly, though, I could find no mention of Black Label on SNC's website, and the album doesn't seem to be on sale anywhere online that I could find.

While Black Label doesn't quite rise to the level I'd expect of a professional group, for a college group it is quite good. SNC maintains a consistent boy-band-ish pop feel throughout the album, which doesn't bend too far even as they veer slightly towards rock in Comin' Home Baby & Fly Like An Eagle, jazz in Can You Stand The Rain, doo-wop in So Much In Love, funk in She's a Bad Mama Jama/P.Y.T., or soul in Here & Now. The percussion, both vocal and finger snaps, is subdued and tastefully done. With an evident trademark sound, it's easy to imagine what the group would be like in a live show.

The group sounds good on all tracks. The soloists are all up to their tasks, everything is well balanced, there are no production gaffes. My major complaint about the album is that it all seems a bit uninspired. There are few risks, few arrangements that make me say "Wow!", and few soloists who knock my socks off. I will note only one exception for soloist and one for arrangement. The most exceptional soloist was Corey Frye on 29 Ways, where he inserts an interesting nasal quality into his voice which is hard to describe. I'm not sure who or what he was channeling, but surprisingly, it works for me. He solos, or shares a solo, on three other tracks, but none of them have that same feel. The only arrangement I feel worth mentioning is Makes Me Wonder, arranged by Frye. Halfway through the upbeat arrangement of the Maroon 5 song, one of the soloists (Corey Frye again?) comes in with a verse of Rihanna's Umbrella. It fits really nicely, and just barely made me say, "Wait, what was that?" when I first heard it.

While I think SNC owes it to themselves to push the envelope a bit more on their next album, Black Label certainly still leaves me satisfied. SNC might want to make the album more widely available because it has a lot to offer to fans and prospective fans. I give it a solid "thumbs up".