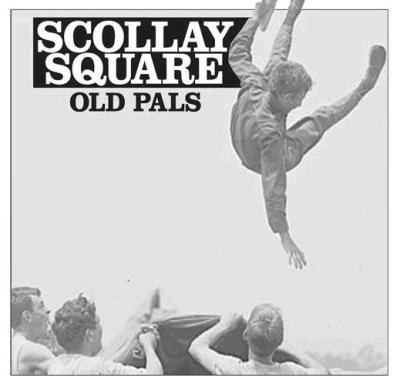 Scollay Square sneaks up on you with this charming barbershop recording. The sound is so low-key, so unhyped, that it takes a few listens to realize just how extraordinarily likable this album is.

This quartet excels at Great American Songbook-style verses, those slow introductions that lead into the jaunty tunes and catchy hooks that people remember. Such opening gems greet the listener from the start, launching If I Had You with understated grace that's easy to miss if your ears don't kick in until the refrain. In the guts of the song, the group's blend is warm and natural. Again, the low-key, intimate sound makes it easy to notice a flaw here and there, without drawing attention to the overall skill on display.

Over time, the achievement of this record becomes clearer, as the small flaws stay small and the big successes start to shine out. The Jones Boy was the first song to emerge from the pile for me, with its fantastic tag and excellent energy. Right before it, You're Sensational is exquisitely, beautifully done. It may be the best song on the disc, and I didn't key into it until several spins through. The song is all sweet, stretched-out slowness, like evenly pulled taffy or any of those other choral metaphors involving texture, continuity, and sensual food.

This disc is barbershop, no question about it. There are no gestures toward rock and roll or Weird Al or gospel, or any of those other things quartets throw on their discs to get a broader audience. Instead, what Scollay Square gives us is niceness: that natural warm tone again. The sound is all the more remarkable for what it's not: not brassy, not overly bright and voweled, not shined to a head-turning studio gloss.

It's singing and it's good. And for anyone who gets this album and has the time to look around, it's right there in front of you. No hidden tricks at all.

The Boston-based quartet Scollay Square aims to present a "traditional, laid-back" sound, blending elements of modern a cappella and competitive barbershop. With Old Pals, they've certainly succeeded in being both traditional and laid-back - but may have missed the mark on modern. The result is a pleasant, if undistinguished, listen.

Old Pals is full of classic American songs presented in a simple and unpretentious manner. Regardless of your predilection for the original material, you have to appreciate the group's talent. These men sing with great synchronicity, and only rarely wander from being in tune. The producers do a good job of staying out of the way and letting the voices shine, but some of the stereo blend was a bit distracting: you can hear the men standing in order around the mike, tenor on the far left through bass on the far right, so the blend never sounded as tight as it could.

The album's strongest element is the arrangements, all penned by the group's baritone, Bob Martin. They blend many of the best elements of a cappella harmony: tight, ringing cadences; jazzy, dissonant chords; moving strings of modulations; a nice mix of long, suspended phrasing and quick-moving, snappy phrasing; even some doo-wop sounding moments. These solid arrangements fit the style both of the group and the original song. It's no surprise that many of Martin's works are commercially published: the man clearly has talent.

However, ultimately Old Pals fell flat for me due to its staid energy and uninspired interpretations. Most tracks have the same attitude and feeling. For instance, I lost the tongue-in-cheek feeling from I Never See Maggie Alone, or the carefree pleasure of Let's Get Away From It All. Throughout, even dynamics feel forced rather than heartfelt. Perhaps these men can put on an energetic and moving live performance, but those abilities didn't translate into the recording studio. The album began to drag toward the end, despite being only thirty minutes long.

Old Pals has many merits, but most of them are technical. If you've got a connection to the material, you'll enjoy Scollay Square's talent and simple approach. Otherwise, you're unlikely to be moved.

The latest release from the Massachusetts-based Scollay Square Quartet catches this group in the act of having fun. That's a very, very good thing as it adds a dimension of warmth and playfulness to a track list of mostly traditional (read: old) songs. Warning: these songs might not be your cup of tea. However, if you're down with Irving Berlin, and you can't get enough four-part music, you're in for a treat. Save for some minor mixing quibbles, Old Pals is a short, sweet listen that should delight fans of old school harmony.

To quote the CD liner notes: "One term best defines Scollay Square: Listenable." I very much agree. With only one song exceeding three minutes in duration, this album is a breezy listen full of generally cheery music. It's all a bit dated (no modern tunes arranged in a barbershop style here), but if you like this type of music you'd be hard pressed to find better renditions. There's an undeniable charm that comes from good friends making good music.

Technically, Old Pals is quite strong. Tuning is generally tight, and the group has a good natural blend which is aided by their infectious love of their material. The lead is sometimes just a little too loud in the mix, which damages moments of otherwise good blend. Beyond that I have little to say: this group can definitely sing!

As far as arrangements go: they're good, but not particularly exciting to someone listening with a more contemporary ear. The group prides itself on renditions that serve the song rather than showcase vocal gymnastics. I respect that, yet found myself wishing for more moments of flair to keep me interested. You could chalk that up to the fact that I listen mostly to pop music which never shies away from the big moment.

Old Pals is a very nice album for what it is. These men know who they are, they have a well defined sound, and they clearly love their material. It might not be for you, but there's no denying the strength of the music.

To order this album, visit A-cappella.com or CDBaby.com.