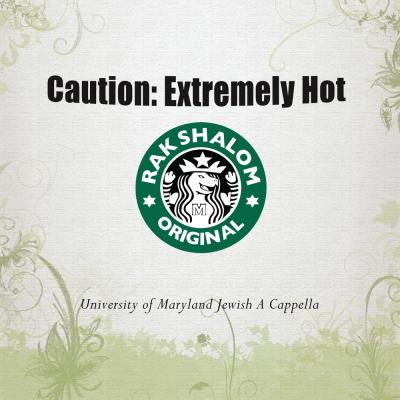 Rak Shalom provides a standard, neat little paragraph inside their latest release Caution: Extremely Hot to give the listener a basic idea of who they are and what they do. I've never read one of these blurbs that so perfectly addressed all of my likes and dislikes about an album before, so I'm going to use this one to reflect on Rak Shalom's self image.

"Rak Shalom, an esteemed Jewish co-ed A Cappella group at the University of Maryland, was founded in 2005 by a group of Terps who were determined to bring liveliness, excitement, and quality to A Cappella performance."

Okay, so we know right off the bat that this group is young. They sound it on some of the thinner, weaker tracks like Heaven Is a Place On Earth, which right from the close harmony intro has many quirks of a high school level performance. Pitchiness still abounds, even with generous help from the studio, and most songs lack the conviction needed to elevate them above average. I'm not buying the "liveliness, excitement, and quality" yet, but this group is still early in the journey.

"We continue to uphold their values today as we travel across the country and perform at a multitude of venues and occasions, including private and public events where our energetic performances attract diverse national and global audiences."

This group aims high. I don't know many college groups who have "national and global audiences" on their radar; more like "upper and lower classmen". Rak Shalom is thinking bigger, and I respect that. Despite its youth, the group made a good decision to have Liquid 5th do all the production work. The result is a much cleaner, more professional sound than they might have otherwise achieved. It's a good place to start, but gone are the days when good production made you the best.

"What truly makes Rak Shalom so unique is our eclectic repertoire, which spans from American and Israeli pop to traditional Jewish melodies."

This unfortunately just isn't really true. Yes, Rak Shalom includes a mix of American pop and Hebrew music, but if you've ever heard another Jewish a cappella group you'll know that this sort of mix is very standard. There is nothing about Rak Shalom's delivery that sets them apart from the dozens of other groups doing almost exactly what they do. That's probably the next step for them: to cultivate a unique sound. How to go about it? Well ...

"We share our passion for music through captivating and intricate arrangements, and our engaging performances will leave you wanting more!"

I'll give the group the arrangement thing. They are generally pretty good and well textured. But beyond occasional moments of interest this album is anything but engaging. To sound unique, Rak Shalom first needs to sound interesting! The arrangements are a good foundation, but the passion just isn't translating yet. Next time, these guys need to turn their energy way, way up in order to really sell the music. "Book us for your special occasion and experience the fun time that Rak is known for bringing both on stage — and off!"

Saucy! Based on this album, I don't think I would recommend Rak Shalom, but I do sense the potential for something special to come from these guys. They clearly have some grand designs, and maybe their live show is more energetic than this album would suggest. If they can get energized then maybe some more of their spunk will translate on record. Until then, there isn't much to set this group apart.

Caution: Extremely Hot is best served to those who will likely appreciate the true value of Rak Shalom's music. Put another way, unless you're looking specifically for Jewish co-ed a cappella, you'll probably be largely uninterested in this album. While much of the music is very nice to listen to, there isn't much energy or enthusiasm to hold the listener's ear, especially if he or she doesn't understand Hebrew.

Assuming Jewish music isn't particularly meaningful to you, this album isn't terribly noteworthy. Mostly, you're dealing with a blend of traditional Jewish melodies, Israeli pop, and some American standards. Most songs are nicely tuned, sampled, and airbrushed, although there's an odd distortion effect used on the basses for much of the album that gets really grating. The soloists are consistently competent, and while they seem to deliver heartfelt performances — especially on the traditional Jewish pieces — I still too often found myself disengaged from the music. While you'll hear a lot of pretty harmonies, they mostly come and go without much sticking in your head.

Some of the pieces do feature nice arrangements, especially those by Michele Nagar. Zodiac in particular features a composition that caters well to the group's voice parts and remains interesting throughout. Still, though, the charts are often not enough to really make the tracks stand out.

The group was founded by individuals who "were determined to bring liveliness, excitement, and quality" to a cappella, but I'd say they still have some work to do on the first two. Especially considering that many a cappella listeners probably don't understand Hebrew, the music itself must find a way to overcome a potential language barrier.

If Jewish music has some meaning to you, I'd say pick this up. Otherwise, I'd hold off. As this group is still young, I'm hoping their subsequent albums will find a way to be more universally appealing while, of course, still staying true to the Jewish values the group possesses.

University of Maryland's Rak Shalom has an obvious religious affiliation, explicitly stated on the front of Caution: Extremely Hot with the tagline "University of Maryland Jewish A Cappella". There's no harm in branching out to pop songs in English as well, but Rak Shalom's choice to intertwine English-language songs with Hebrew ones creates an album with a disjointed feel. Every time I started getting into a groove, the group immediately changed gears and started singing in a different language. I wish that they'd split up their songs into two separate EPs: either two physically separate discs or one disc split into two halves (like an old-fashioned LP: side A in Hebrew, side B in English).

Rak Shalom's non-English songs work because they create a mood and an intensity that carry despite the language barrier. Rak Shalom conveys a lilting energy in Idan Raichel Medley and an uplifting tone in Meheira; these are songs that have an intense focus without a flashy vigor. Similarly, the group has picked soloists who are well-suited to these songs. They aren't showy or ostentatious; instead, they complement and enhance the songs rather than overpowering them. The uptempo Chevra Medley has a really precise, powerful arrangement as well. Not every non-English song works, though; Tirkedi Et Halayla, by Israeli songwriter Avi Toledano, is a bit jumpy and repetitive; there is a part when all the backing singers drop out where the soloist can't quite carry the whole arrangement.

Rak Shalom's English songs are equally uneven; they work best when they capture the subtle, intricate mood of their more successful non-English songs. Your Ex-Lover Is Dead has a lovely, swaying feel, and the group really nails the mood of KT Tunstall's Hold On thanks to the haunting solo of Zehava Moskowitz.

Their other English songs, though, aren't well-executed. The Call requires on an energy that the group doesn't really have (and it's a song that doesn't easily lend itself to Rak Shalom's style of a cappella, since it's basically a dance beat with a vocal melody on top). And the group alternates between group harmonies and soloist work on Heaven Is a Place On Earth and Can't Help Falling In Love; neither arrangement is terribly complex, but the group doesn't execute either with precision, making the resulting songs seem a bit sloppy.

Rak Shalom is a relatively new group, though, having formed in 2005. While they do sometimes step a bit outside the niche that they do well, they mostly seem to know their own strengths better than many young groups. This focus makes Caution: Extremely Hot a fairly solid effort overall, albeit one that's disjointedly tracked.

(On a note unrelated to the music, I wish that the group had spent a little bit more time proofreading and/or enhancing its liner notes. Your Ex-Lover Is Dead is spelled correctly on the tray card but is mis-typed as "You're Ex-Lover Is Dead" in the album's insert. Songwriter and original performer credits are a bit obtuse as well: Can't Help Falling In Love is listed as "by UB40" with a footnote of "Gladys Music Elvis Presley"; Rak Shalom could have clarified this entry with the "apb" ("as performed by") tag and/or by listing the song's original writers.)