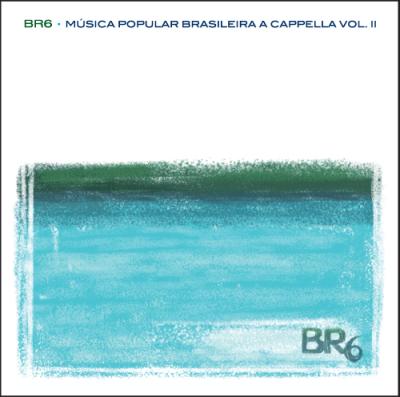 Beautiful Brazilians singing beautiful bossa nova brilliantly. Women's voices you can get lost in, men's voices that blend seamlessly, polyrhythms to soothe your cares away. And like all the best recordings, it gets better with every listen, as new details find their way to the surface of your listening attention.

It's so hard to pick a favorite song. At the moment, I'm drawn to Tanta Saudade, with its smooth groove and lovely female solo. When I first got the disc, all I wanted was the first thirty seconds of Papagaio do Futuro / Fé Na Perua, with its emotionally charged beat and electric opening segue. It reminded me of Sergio Mendes's Magalenha, which never fails to enthrall.

Farther down the a cappella continuum, Surfboard is the epitome of cool. It's vocal jazz at its best, pushing the envelope and pulling the listener in at every turn. From there, it's just a matter of taste. Some people will like the straight-ahead 70s pull of Casa or the stretched out Mas Que Nada. Others will gravitate toward the spicier tunes. Bala com Bala is likely to be my next favorite, for its fantastic groove.

Parts of this new album assimilate more than others. Vocalese horn sections, no matter how impressive, can be jolting when slid into a more laidback jazz playlist. At the same time, the sparkling technique on display here ought to be enough to win over the skeptics, at least for a little while.

If this is your thing, this disc will be your thing. Get one already and bliss out with the best.

It's no wonder BR6's Música Popular Brasileira A Cappella Vol II won two 2010 CARAs (Contemporary A Cappella Recording Awards). Choosing this release for Best Folk/World Album and Best Central/South American Album is an easy call. It's an absolute must-have: hot Latin beats, head-spinning chords, dizzying rhythms and musical fire that cannot be quenched. Música Popular Brasileira A Cappella Vol II may be a mouthful, but it's unquestionably the album of the year.

This sextet has been playing for a decade in Brazil and their sound evidences the kind of special group connection and expressiveness that simply cannot be faked in the studio. It's a perfect match for these jazzy arrangements and hooky melodies.

Música Popular Brasileira A Cappella Vol II is filled with correct choices. The energy of their prior releases has been retained, but the singers' accuracy and control is significantly improved. (And they've done this without sounding artificial.)

And most importantly, BR6 seem completely at home with this material. Their fascinating arrangements highlight hot chords and hotter rhythms.

And thankfully, you won't hear any of the meowing guitar and Neil Diamond-esque over-the-top cheese rock of BR6's recent past (compare 2007's The Girl from Ipanema). This release is just the good stuff.

Though BR6 credit Take 6 as inspiration, you won't hear gospel or even the kind of explosive melismatic solo work that is the Take 6 trademark. BR6 is nothing if not an ensemble and this album owes much to an unwavering focus on that strength. Like Germany's Maybebop, they put the group sound first, soloists second.

BR6's production enhances their sound gently, bringing out the group's strengths without ever getting in the way. Particularly nice are the reverb and EQ choices on the frequent and very enjoyable vocal horns. (BR6's genuine live sound is available here for comparison.)

This is the kind of release that will undoubtedly have broad appeal. College students will love it, but so will grandmas. BR6 is pure, spicy vocal talent served hot. This is a dish not to be missed.

Brazilian jazz sextet BR6 has two fantastic strengths: their choice of syllables and their energy.

Their syllables, at their best, are the kind that you can't quite transcribe; if you could, it would be "noise that sounds like horns" or "replication of brass". This is what makes an all-vocal arrangement sound less like an imitation using "doo", "bow", and "bah" and more like people actually making music. Key examples are the horn blasts on Tanta Saudade and Deixe a Menina and the basslines on just about every song. Even at moments where the group's sounds have a very clear syllable, these singers still play with the note to give it a distinctive sound; on Surfboard, there is a repeating "bing bing bing bing" where the singers' voices swell and recede, creating a Doppler effect. The listener is drawn more to the sound and the effect, rather than the specific word the singers are using.

As far as energy, the best songs on Música Popular Brasileira A Cappella Vol II are the uptempo ones, since they have the highest energy. Tanta Saudade, Bala com Bala, and Deixe a Menina all stand out for their precision and liveliness; these are likely the three strongest songs here. The group loses me a bit when it slows down (Sou Vocé and Retrato da Vida especially), even though it still maintains its pitch accuracy and intensity. That said, it could just be that the group sounds like it is having more fun on the upbeat numbers, while it's harder to convey that same exuberance on a slower tune.

The group is not breaking new ground here in a cappella or in vocal jazz, but not every album needs to do so. The pitch and tuning are great, the syllables are just unusual enough to replicate instrumental sounds in a non-distracting way, and it's obvious from top to bottom that these singers are enjoying making music together. All of that combined makes Música Popular Brasileira A Cappella Vol II a fun, energetic listen overall.

To order this album, visit the iTunes store or Amazon.com; in Japan, here; in Brazil, here.