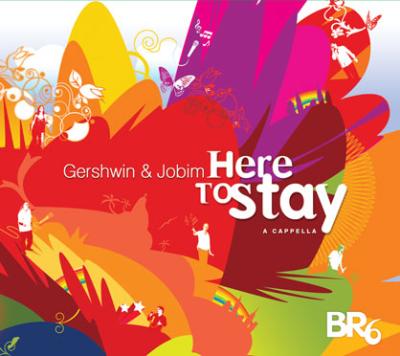 Finally, a jazz a cappella group that sounds so much like itself! I love this new album from Brazil's BR6. Great singing, great arrangements, great tracks, and best of all, great ideas. I mean, I love Take 6 and Vox One and the Manhattan Transfer as much or more than the next person. But where is it written that all vocal jazz groups must include a direct tribute to one or more of the above?

BR6 is doing their own thing, and boy is it good. Here To Stay infuses the songs of George Gershwin and Tom Jobim, two of the world's most beloved jazz composers, with a thoughtful mix of tradition and innovation. The arrangements are sharp and crisp and alive. They are distinct, but not aggressive about it, a very smart approach to a standards album. It's nice to see these songs handled with care, yet not come off like a carbon copy of, say, the entire set list from "Getz/Gilberto".

The main musical idea running through these songs is a relentless forward motion, a walking rhythm that propels everything along. It's particularly distinctive on tracks like Waters of March/Rhapsody In Blue or The Girl From Ipanema, where such a steady beat runs counter to expectations. But this pulse also holds together through the more Latin-y songs. And it never gets in the way, thank goodness — these songs have musical range, so it never feels like someone left the metronome on the whole time in the studio.

Forever Green is my favorite song, I think, with its ballady groove and terrific decorative riffs. I also particulary liked the torch song approach that kicks off Someone To Watch Over Me, with its samba of a chorus and lush horn-section finish. The vocal brass lines are excellently handled throughout — the BR6 singers have great intonation and good musical lines that keep the "instrumental" breaks from sounding gimmicky. For the most part, the horn solos fit the songs, so they come and go without breaking the mood.

A word on language — all of these songs are in English. The group's website says this is a deliberate effort to reach US audiences, who presumably haven't paid much notice to earlier Portuguese recordings. Fair enough. That said, I would have enjoyed more of a mix, for texture as much as lyricism. There's just something beautiful about Brazilian Portuguese. It comes through even in the language's absence, lending a soft quality to the singers' voices and a sexy foreign accent to the English words. (And yes, there is a double standard. We at RARB have often ragged on international groups for less-than-perfect English dialect. Sorry folks, it's just one of those global inequities — German-accented English sounds goofy, but Brazilians sound hot.)

Here To Stay — Gershwin & Jobim is my favorite a cappella album of 2007. If you're only going to buy one all year, it gets my vote. Enjoy.

Here to Stay is the work of professionals on all fronts, from the psychedelic artwork to the complex and subtle arrangements. BR6 presents a mix of Gershwin tunes and songs by Tom Jobim (the Brazilian composer perhaps best known for The Girl From Ipanema) viewed through the lens of jazz and samba.

The opening strains of Gershwin's Rhapsody in Blue meld seamlessly into Tom Jobim's Waters of March, and the gorgeous interludes weave the tunes together with deceptive ease. Fascinating Rhythm fascinates with its rhythm and tempo and a swiftly moving bass line that is executed with aplomb. The Girl From Ipanema has so much ear candy with a contemporary-sounding introduction that doesn't give away the song and a countermelody in the verses that puts a beautiful twist on a song that has been done many times before.

The entire album has these gems: a trill or slide on what could have been a straight chord, switching up from many moving parts to block chords to unison and back again. The simplicity in some parts of their arrangements give the ear a quick break before they dazzle again with vocal gymnastics. They achieve a blend that is almost uncanny, and their jazzy chords resonate beautifully.

A teensy tadpole of concern is the interpretation given to first verse or so of Someone To Watch Over Me. The soloist's lost lamb sounds more like a wolf in sheep's clothing, with some stylized vocal licks and trills that are downright predatory. The sweetness and pleading of the song isn't fulfilled until midway through, when the soloist tones down her approach.

Everyone but the vocal percussionist contributes solos to the album, and while they are all fabulous singers, I would not call any of them fabulous soloists based on this album. Don't get me wrong, they are great. But I'm reminded of Vox One (whose jazz chops were just as good), and I recall that they had a few soloists who made the hair on my arms stand up. No one in BR6 does that to me. I don't doubt they can do it, but I think the focus was so much on the complex mingling of voices in the arrangements that the solos almost seem an afterthought. Indeed, Pato Preto has no solo and is one of my favorites. The four minute-plus song closes the album without a single word and never ceases to be interesting, throwing in some Gershwin in the last few bars.

Bright and colorful both visually and vocally, I have had a few of their catchier melodic sequences stuck in my head for days. Let's hope BR6 is "here to stay."

Proving that breaking the mold in modern a cappella needn't require a group to cloak their voices under layers of computer-generated effects and vocal percussion, Brazilian sextet BR6 has produced an absolute masterpiece of a cappella with Here To Stay, the group's homage to the music of George and Ira Gershwin and Tom Jobim. As revolutionary as the album's sound is, the greatness of Here To Stay is grounded in the principle that great arranging, great singing, and great production will make a great album.

BR6 shies away from nothing on this album, tackling guitar and trumpet solos with prowess, even closing their album with the brilliant and "instrumental" Pato Preto. The arrangements no doubt rank among the best in a cappella today. Syllable choice is daring (think lots of "-ow", "-aw", and "-ng" sounds deftly mixed with the traditional "-oohs" "-ahs", and "-ims") and creates a remarkably full sound despite frequently utilizing the same rhythm over multiple voice parts and four male voices, compared to the lone mezzo-soprano of Crismarie Hackenberg. No arrangement is the same beginning to end: the bare last verse and chorus of They Can't Take That Away From Me gives that (relatively) weak song some much-needed life. Perhaps the disc's crowning achievement is Marcelo Caldi's arrangement of Waters of March/Rhapsody in Blue, which is nearly as enchanting and mystifying as Jobim's lyrics. It makes for an outstanding opening track. The final two tracks are equally as impressive, as are The Girl From Ipanema and Fascinating Rhythm. Even Song Of The Jet, the weakest track, has a nice groove.

BR6 blends excellently are practically pitch-perfect the entire album, and the album's polish extends from Cylan Delgado's mixing and John Vestman's mastering to the album art and liner notes (complete with lyrics). The design scheme and use of color on the cover art is reminiscent of the lastest Beatles' release, Love, and makes a fabulous first impression on the listener. In fact, the only unpolished part of the whole album (musically or otherwise) might be the opening bars of They All Laughed, during which the vocal percussion sounds a little organic and hollow.

And while the soloists aren't extraordinary, they don't need to be. The solo is just one small part of a much larger listening experience on Here To Stay. They can certainly sing, though. When a song calls for groove, the soloist grooves; when it calls for a restrained, understated performance, BR6 delivers. The musicianship is of the highest quality on Here To Stay, which, combined with the excellent source material, the group's contagious energy, and the stellar production, make this album an absolute must-have.

To order this album, visit A-cappella.com or Primarily A Cappella.