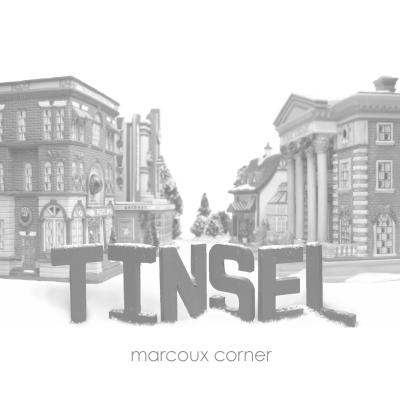 Despite the full, glossy production, careful listeners will find the sound a little cut and paste and a little auto-tuned. Happily, these electronic artifacts are easily forgotten as easy-listening leads croon away. Rich chords, gentle tempos and pervasive homophony make Tinsel the kind of recording sure to be loved by barbershoppers looking to stray for the first time.

Marcoux Corner's signature is clear from song one: cute, clever and perhaps a bit corporate. Tinsel is harmonically creative while remaining perfectly safe in its limited emotional and timbral palette.

Unlike so much a cappella today, Marcoux Corner doesn't aim for more than they can ace. Just about every note attempted is hit spot on. And that makes this recording a pleasure, even when the choices are predictable.

Regular RARB readers be advised: this isn't pop rock. Tinsel has closer cousins in Christian a cappella than in contemporary fare.

It must be admitted, the pleasant swinging and ensemble focus can feel like background fare. But in some ways, that's a perfectly fine fit for the holiday season. A toasty fire, turkey cooking in the kitchen, presents under the tree and Marcoux Corner's Tinsel underscoring the laughter of friends and family ... Add snow, and that sounds like a pretty sweet Christmas to me.

It's been a number of years since I've heard an album by Marcoux Corner. What a difference a bit of time makes. The quartet's lastest disc of December-ready fare, Tinsel, is a treat. One would begin to think that I'm learning to "grasp" love and appreciate Christmas music. I wouldn't go that far — I'm still a Scrooge — but suffice it to say Marcoux Corner's disc makes it easy to see why radio stations devote months to playing seasonal music.

The first thing you notice with Tinsel is the lush sound of the voices and chords. The group has gone the naturalistic production route, where the sound on the disc seems to replicate their ability on stage, all to great effect. The voices fairly melt into each other, creating a joyous sound.

The construction of the songs belies the fact that there are only three voices represented in the background. Josh Baesler and David Phelps do an admirable job of arranging in a style that really capitalizes on the abilities of the group as a whole and each individual member. They each know how to layer the voices in a way that still maintains the distinct sound of each of the members and the simplicity in presentation of the arrangements.

Marcoux Corner really shines on the ballads. I think Christmas Time is Here is my favorite. That one brings back so many awesome childhood memories. They give you a double joy by including the opening strains of Linus and Lucy as the introduction. Pure perfection. The Christmas Song and What Are You Doing New Year's Eve? are effective wrappers to a great present of music.

The only problem that I have with the production (and the CD really) is that even with the subdued effects, the overall quality of the voices is very metallic and electronic (downright "tinny" if you ask me), especially on songs like Oh Come All Ye Faithful and Frosty the Snowman. This choice has rendered the recording slightly cold and austere at times. Which is a bit ironic, no — what with the concept of the Christmas season as being all warm and homey? But this is truly a minor quibble. The guys still make music worth listening to ... and when they get it right, it is pure heaven.

I'm going to make a bold assumption about Christmas CDs: I bet most people don't listen to holiday music with quite the focus that they use to approach year-round music. Holiday music often fades into the background, even when it's something that a listener has picked out him- or herself. Combine that with the fact that most people don't listen to Christmas CDs for more than a month or two per year, and you're left with albums that don't have to sound as good as year-round ones.

With all that said, Marcoux Corner's Tinsel probably sounds a little bit better than it actually is. That's hardly a complaint, though: it's an enjoyable listen, and it captures the holiday spirit. Most especially, this quartet definitely has a distinctive style about it. These are slightly jazzy versions of songs, and they all have a little bit of a kitschy feel to them: Frosty the Snowman has an energetic, recurring "thumpety-thump-thump" line, and Baby It's Cold Outside is a sassy duet with guest vocalist Nancy Harms.

But let's remember, these are Christmas songs, so a bit of cheese is to be expected. More importantly, these guys are delightfully on in these songs. Kay Thompson's Jingle Bells is super tight vocally, and the group's cover of Moxy Früvous's Huge on the Luge is both well-executed and just plain fun (it's probably not a song that a lot of people know, so it catches the listener's ear in a way that many holiday songs don't).

I have only two real complaints about this album. The first (and lesser) is that some of the arrangement choices are a bit bold for my taste. Specifically, God Rest Ye Merry Gentlemen begins with a straightforward interpretation but segues into a more jazzy/loungey arrangement. It's a bit over the top (although I do enjoy the panting percussion). Later in the song, the bass takes the solo for a verse, and it just doesn't fit in. His voice is great, but switching soloists in the middle of the song just doesn't work here (nor does it work in most songs, actually).

My bigger issue with Tinsel is that it's a bit all over the place when it comes to song choice and style. I just can't tell whether Marcoux Corner is trying to be a jazzy, brassy group with unusual, fun songs or whether the group wants to have a more traditional approach. There are both kinds of songs here, and the differing styles make it difficult to pinpoint exactly what kind of group Marcoux Corner is. They do update the arrangements for their more traditional songs: Oh Come, Oh Come, Emmanuel has a modern percussion line, for example, but I'm not sure that it actually works; it just seems a bit distracting on one of the holiday's more melancholy tunes.

Ultimately, though, the group's fuzzy focus here is completely acceptable on a holiday CD. Despite a few odd arrangement and song choices, Tinsel sounds great and would make a nice addition to anyone's holiday collection.