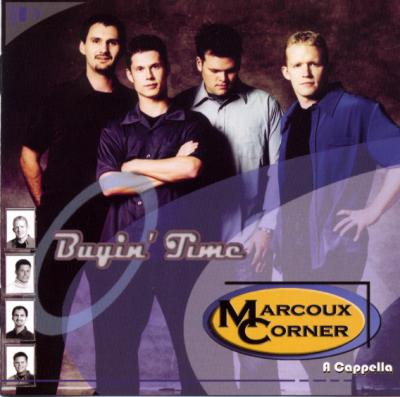 Marcoux Corner's Buyin' Time is very good overall. The group has made its home in North Dakota, and so invites comparison with their musical predecessors there, The Blenders. They have more than just geography in common with that group. Both groups are made up of four guys; both have a consistently smooth blend and few tuning problems (such as the spoken-word counterpoint in Contemptible); finally, both earn big kudos for their wide range of originals.

Marcoux Corner makes good use of its time in the studio. The recording is uniformly crisp and well-mastered, with all parts audible and the important parts more so. Equalization on the vocal percussionist is also appropriate (surprisingly, the vocal percussionist does better with the more difficult snare than with the easier velar aspirate). This should be a lesson to all groups. Too many recent recordings have used engineering to take their sound well past the point of repeat listenability (e.g., Blind Man's Bluff). Marcoux Corner rightly errs on the side of underpresentation, allowing their music to speak for itself.

The songs themselves are split nearly evenly between covers and originals, and the singers are equally at home with both. All of the songs should probably be described as tame, perhaps polite; the opening track, Mustang Sally, has been toned down from rock to pop, and the other songs have a similar feel. Nice, energetic? Yes. Rocking, soulful? No.

The originals are all in this same, polite vein. Some are quite successful (Changes; Someday Soon), others more ordinary, if not banal (Your Kisses). In general, they suffer from what increasingly seems to be an epidemic in the contemporary a cappella community: the inability to distinguish musically, lyrically, or interpretively between the verses and the chorus. On none of the originals is there a substantial move to a particular chord progression, a catchy and comprehensible lyric, or a decisive shift of emphasis on the part of the soloist. The contrast with something as trite as Footloose is instructive. Again, Marcoux Corner is not alone in not understanding how to write a chorus. This might be a good topic for a seminar at an A Cappella Summit.

All told, Buyin' Time is thoroughly enjoyable in almost every respect, with only soul left out. A pleasant debut from Marcoux Corner, from whom we should continue to expect solid and ultimately persuasive a cappella in years to come.

The men of Marcoux Corner are pretty darn good. They write original music, they perform flawlessly, and their arrangements are clean and interesting. Their album Buyin' Time is a good purchase for any a cappella fan.

There are ten tracks on the album; each is pretty long. Hint for the guys: include length of track after the track name — this will help you with radio play. Also, I would like to know who sang the solos on each song.

Six of the tracks are originals; four are covers. The first two tracks (one original, one cover) are my favorites and are the standout songs on the album. They peaked on those tracks, and the rest of the album, while good, was a disappointment in comparison with the first two tracks.

Most of the tracks dragged a bit — they were just too long. The originals, with the exception of In My Dreams, don't really stand out. California Dreamin' seemed out of place and the guys could have left off the live Footloose. It was good, but a studio version would have been even better. The solo on Moondance was a little shaky.

This is still a good album with solid songs, arranging, pitch and blend. It is worth the purchase price for the first two tracks alone!

This is your mother's a cappella: gorgeous voices, facile arrangements, simple vocal percussion (plus shaker and tambourine on three tracks), and honey-coated harmonies. The four guys don't take any real risks — they just make good (though bland) music through a mix of covers and originals that is tailored not to offend anyone. And it's growing on me. Grr.

While listening to the first two tracks, I wanted to hate this CD and found myself laughing at inopportune times. And then I listened some more, and damn it, this is another Midwestern group that I want to hear more from, once their songwriting skills have improved.

The musicality of the group is so much stronger than the songwriting. The arrangements are credited to Marcoux Corner — a strong testament to the creative relationship. Imagine early Rockapella, without Sean Altman's lyrical ability.

They are adept at jazz, swing, pop ballads and doo-wop styles, but I cringed almost every time I had to listen to verses. The lyrics never rise above the sophomoric and are possibly as embarrassing to sing as they are to listen to. The most notorious offender is In My Dreams:

It's been a long time now since I been next to you. Been feeling quite depressed, been getting awful blue. But I think I've found the cure to make everything alright, I close my eyes and think of you as I turn out the light.

Most people say this is odd behavior, I say to them you're out of your minds. When your girls [sic] far away only one thing can save you in a deep peaceful slumber your love you will find.

The guys are better when singing other people's words, as the covers Mustang Sally, California Dreamin', Moondance, and Footloose soar with energy, though the lead is a bit overzealous on the diction during Footloose and Sally.

I wish I could tell you who sang lead, but since the liners don't list soloists, I can't. The added video documentary "CD extra" finally clued me in on the performers' last names and voice parts.

Save this one for next Mother's Day...I'm telling you, she'll enjoy it!

Make checks payable to "Marcoux Corner" and be sure to include your return address.