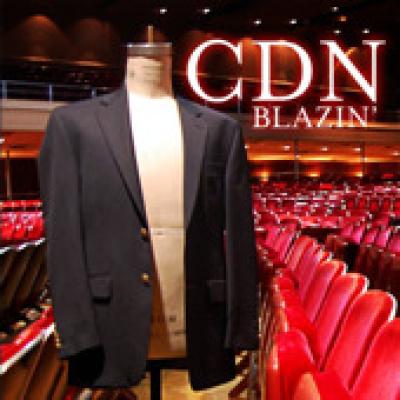 Perhaps they should have called it "Blazerin'"?

The image of the navy blazer on the cover of the latest CD from UConn's A Completely Different Note is entirely à propos as these twelve gentlemen, who sound like a glee-clubbers trying very hard to be current and cool, once again deliver an album long on nice unison, blended singing and short on much else that is engaging or interesting.

When they're singing together in big block chords on "ooh", "ahh", "bum", variations thereof, or even more percussive syllable combinations such as "jin-je-jin-jin" or "zha-dah" or "dit-it", these guys have a lovely — if somewhat too formal — sound that provides a solid musical anchor for the soloist.

Trouble is, that's about all that is happening in most of the songs. Yes, yes, there is crisp, clear vp that is sequenced capably by the boys at Liquid 5th and there is the obligatory bass line that has been given a measure of technological thunder and heft that the natural voices singing it do not possess. There are all sorts of little vocal sound effects and ornamentation — heck, besides the group singing that's about all there is in The Chemical Workers' Song — also courtesy of the Liquid 5th guys. But at the end of the day, there really is so little substance to any of the arrangements at all.

What makes this even more surprising is that most of the arrangements are "work for hire", including one from Deke Sharon and several from the usually reliable Nick Lyons. If I were giving them the benefit of the doubt, I'd say they were specifically arranging to the group's strength in unison group singing because both are capable of far more sophisticated and interesting work. Deke's initial idea for establishing the feel of Fly Like An Eagle was intriguing to me, but the arrangement doesn't really progress or develop beyond the opening (if anything, it gets simpler and less interesting). Nick's trusty distortion effect can't mask the fact that the opening Take Me As I Am is pretty much just block chords with a guitar rhythm layered on top. It sounds sexy at first but it's really very simple stuff.

To be fair, CDN has always had a predilection for singing that errs on the side of sounding "legit" rather than "rockin'", and the precision and hyper-articulated syllables they insist upon ("time keeps on slippin', slippin', slippin'...") do them no favors. Indeed, the plodding verticals of their arrangement and performance, relying on straightforward half-note, quarter-note, or running eighth-note rhythms, so frequently landing heavily and predictably on downbeats, sap the underlying energy. This is particularly noticeable in a song like The Way where the extended pauses between lyric lines show off backgrounds that just lie there like a wet noodle, sounding weak and limp.

Once again, I wish these guys would sing what they do best. A King's Singers-esque When She Loved Me is the bright spot here in an arrangement that doesn't try to be anything hipper and edgier than what it is. Like Shenandoah on their last album, when these gents are given the opportunity to sing the more traditional material and/or arrangements, they can really impress. But as a contemporary a cappella group, the only "blazin" they're doing is with their jackets.

Too bad it's a bit brief, because Blazin' is consistent and likable, with some really stellar arrangements to boot. I think you'll really enjoy what the guys from UConn have in store for you.

On the mega plus side, every single arrangement is at least interesting on Blazin', and three stand out as powerhouse material. (However, a good chunk of the arrangement front is coming from outside the group, which some will see as a negative.) Of the three, When She Loved Me rolls out first. It's neat how something as simple as thoughtful phrasing can really add so much character to a song, and when the phrasing is added to what's truly an artistic arrangement (co-arranged by Nick Lyons and Kelly Turner), there's a pretty powerful outcome. Party tune Whatcha Say (ft. Rubyfruit) couldn't be any more different from When She Loved Me, and it's still as great in its own right. There's just so much happening here, and every voice feels vital to achieving this level of cool. Plus, in a fun collaboration, female UConn group Rubyfruit adds a perfect feminine touch on the track. Great job to arrangers Justin Beauchamp and Joey Homza (from CDN) for dreaming this up. Anna Begins, another work from Nick Lyons, completes the Amazin' Arrangement Trifecta. This is definitely the best Counting Crows a cappella arrangement I've heard, and I'm a huge Adam Duritz fan with high expectations.

The only mild disappointment comes from the "let's try to sound just like the original artist" performances. I hear a soloist trying quite hard to join Rascal Flatts on Where You Are and another soloist trying to blend with aforementioned Adam Duritz when a more relaxed delivery would have fit better. Such approaches are pretty common in the college realm, but individualism is always preferred. There are plenty of moments on Blazin' where the listener is treated to excellent vocals from a skilled ensemble; I presume each soloist is capable of bringing his own spin to his lead when the whole is this solid. One does not get accepted into a group like this unless they're quite good, yeah?

At any rate, definitely looking forward to another recording at this level and beyond from CDN.

For my review of the latest CDN album, see my review of their last one. Blazin' reminds me so much of their previous release, Mixed Nuts that it's almost like they just made the same album again.

Okay, that's not entirely fair. There are a couple of small, but important differences that show an attempt at improvement. Yet there's still a transcription-style arrangement of a mid-tempo Counting Crows tune. The similarities outweigh the differences.

Things that are the same: in the plus column, the singing is still generally good, and production does a fair job of letting the voices shine while simultaneously boosting them here and there with appropriate effects. As on Mixed Nuts there is another sort of chorally tinged tune (The Chemical Workers' Song) that's by far the best song on the album. It has all of the energy, nuance, and atmosphere that the rest of the album merely toys with.

Also in the plus column is the fact that every soloist is able to hit every note of his given song (despite the fact that many sound as though they're pushing the top of their "studio-only" belts). Competent as they may be, however, not a single solo moved me with anything unexpected or truly outstanding.

There's one key difference that I have to give CDN credit for, and that's the track list, which is decidedly more original than last time around. Mid-tempo Adam Duritz salute aside, I have to give some originality points out for songs I haven't heard before, and enjoyed (Lost!, some nice textures in the arrangement and drums on this one), and songs I expect to hear quite a bit recorded over the next year, but haven't heard yet (Whatcha Say). Nice job being ahead of the curve on that one.

Still, CDN needs a serious creativity injection. A bit more energy and high end in the mix wouldn't hurt either. The new track list is a good start, but these guys need to stop being so transcriptive with their arrangements and solo deliveries. What does the song mean to you as a group? I want to hear the answer on your next album.