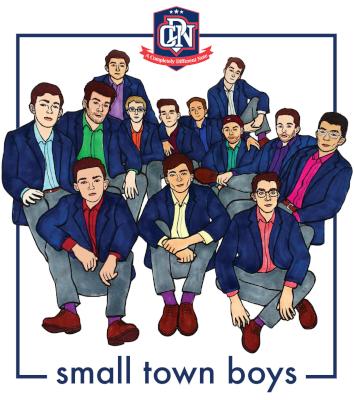 Though it may sound clichéd, energy and intensity is often the critical factor in separating an average album from an exceptional one. While post-production efforts can tidy up rhythms or nudge flat notes up a inch or two, effective delivery behind the booth is something technology (at the moment) cannot replicate. Fortunately, A Completely Different Note (CDN) accomplishes this feat consistently across its 2018 album Small Town Boys. After spending time listening and acquainting myself with the project, I ultimately find a well-balanced album that feels deliberately executed with a selection of songs that complement one another despite differing genres.

Small Town Boys begins with the catchy intro Lookin' Like That, originally performed by Jordan Fisher. While I'm usually not one for super bright sounding pop tunes, I find myself thoroughly enjoying this CDN rendition. It's rhythmically tight, and the audio is well-balanced between the background and soloist. Something I really appreciate on this (and other tracks on the album) is the group's choice to opt for smoother sounding "ooh"s, "ahh"s, and "bop"s as the chief syllables where sensical. While arguably more basic, these allow for a subtler, gentler blend between the voice parts.

The next song, Circle, maintains many of these same strengths. There is a lot of warmth and connectedness amongst the parts, and the soloist does a commendable job embodying lyrics and growing with the dynamics where necessary. I'm also a big fan of how crisp the percussion is on this song; it really adds another layer of depth and rhythmic texture. While I find a lot of a cappella percussion too "wet" sounding, I find the relative dryness here effective in better simulating the low-end punch of the kick drum. I have to say this song actually slaps. Well done.

That's What I Like is yet another well-done cover. The soloist's tone fits nicely and the general bounce of the original is excellently preserved in the translation. The dynamics of the backing vocals are also excellent and provide the necessary shape and direction. Again, the production on the vocal percussion here is fantastic and captures the essence of the trap hi-hat rhythms to satisfaction.

In all, Small Town Boys delivers on many different angles. Thanks to CDN's great song selections, it's an album that I think should entertain listeners across different musical sensibilities, whether pop, rock, or R&B. While there isn't a whole lot going on in the innovation or risk department, CDN succeeds on Small Town Boys largely because these singers sound and feel like they're enjoying themselves on each track. As a result, the repeat listenability for this album is well above average.

My personal recommendations include Circle, That's What I Like, Kiss From A Rose, and Lights.

Due to university rules, A Completely Different Note from the University of Connecticut had to release this album without the chance for profit. Small Town Boys is available via SoundCloud. Is it worth a listen?

One thing immediately admirable is the group's taste when it comes to choosing songs that have interesting chord progressions. It's easier for the arrangers to create works of art when the existing chord palette is not as limiting as most current Billboard Top 40 songs tend to be. There's nothing wrong with the group's musicality — each soloist portrays his front line character really well without breaking a sweat. But just because the singer can sing those high notes, doesn't mean he has to (like in the song Lights, for example).

Lookin' Like That, as an album opener, sets an energy level that a listener would expect. Unfortunately the whole album has no variation and sounds too predictable — it might have a different effect on others, but to me, it's more of a noise barrage than a musical eargasmic experience. Even Kiss From A Rose, a song that's supposed to sound vulnerable and emotional, clearly lacks the original appeal that Seal portrayed. CDN's version is about 10-20bpm too fast and this could be the reason why the song feels rushed.

My favorite tracks are Circle and PYT (Pretty Young Thing). The short drama for an intro makes a huge difference. Both soloists, Grant Clark and Ryan Harger respectively, do a great job singing their solos. I also like the insertion of tension notes on the chorus of Circle which makes it sound more sad.

Having listened to the tracklist a few times, I see a pattern of high energy performances and solos with tessitura that don't go below Middle C, which makes Small Town Boys feel like a pre-workout and double shot coffee drink throughout. After a few "rewinds", it makes me want to go to my room and appreciate the beauty of silence for a while.

The last two songs are slower than the rest of the tracks on Small Town Boys, thank goodness. However, Earned It is still a sonic bombardment just like the rest of the songs. The main issue I see in this release comes with its Repeat Listenability: I can only find one or two tracks that my ears can handle on this album full of big sounds from top to bottom.

Small Town Boys is just short of fantastic. A Completely Different Note, University of Connecticut's all-male a cappella group, delivers ten songs that are about as consistent and polished as you would hope for from a collegiate a cappella group, with flourish and finesse at almost every corner.

The group very openly shows a penchant for high-energy, pop powerhouse songs. Lookin' Like That definitely sets the stage for the tone of the rest of the album, and while Circle and Animal Spirits deviate a tad from this model, almost every song following embraces it. There is an impressive level of consistency in the soundscapes, despite how different some of these songs originally may have been.

It's this consistency that allows Journey's Lights, Michael Jackson's PYT (Pretty Young Thing), and The Weeknd's Earned It to live together comfortably on the same album. A clear, crisp vocal model certainly helps, and the excellent work by A Cappella Productions ensures that these voices are brought out and showcased to the fullest while not being distracting. It's a good sign for me when I get just as easily entranced by the background voices as I do by the soloists, even when the soloists are carrying their songs very well.

Speaking of which, the solo work is probably my favorite part of this album. There isn't a single soloist on here who doesn't own his song and put his own spin on it. Risks and liberties are taken all over the place, and they pay off in spades. I could easily give every single soloist on this album explicit mention, but I'll give a special shoutout to Grant Clark on Earned It for properly crushing every required section of his vocal range without needing to be extra showy all the while. Ryan Harger also deserves mention for effortlessly covering three different artists, all of which I consider almost impossible to properly cover.

Perhaps the one thing holding me back from giving this album a perfect score is the overwhelming number of high-octane tracks and loud singing. An album, ideally, can express an arc, or an ebb-and-flow, rather than be consistently nonstop in a certain gear. So while there's not a single song on this album I dislike or want less of, I would've liked to hear some moments where A Completely Different Note eased up on the volume and intensity for a song or two to break up the action. This provides negative space where the listener can then be more prepared for the next all-out energetic song. Kiss From A Rose, for example, could've provided this. There are numerous moments in the original that are gentle and sweet that A Completely Different Note sings on nothing less than a mezzo forte. Circle, My Oh My, and Lights could've also easily provided this.

On the bright side, there's so much energy brimming in both the soloist and ensemble work on most songs that it's contagious when not overloaded. The spots at which the energy levels unintentionally tone down, however, become even more apparent as a result. The Popular Thing has moments that I absolutely adore, and then moments where I can't latch onto the enthusiasm because it's temporarily absent. Animal Spirits lacks polish in the sloppy last-minute mashup incorporated at the very end, and could use more inspired instrumentation in the background voices. The original song, in particular, is so built on instrumental spontaneity and free-flowing movement. For the arrangement to mostly amount to imitation of those same instruments feels antithetical to the song. That being said, these are minor nitpicks and only come out because the rest of the album is as polished as it is.

A Completely Different Note succeeds at precisely the brand of music it set out to record: upbeat, powerhouse, all-male a cappella. The group is definitely not short on the talent necessary to execute music from the likes of Seal, Bruno Mars, and Michael Jackson. In the future, the arrangements and background voices need to employ a much more extended range of "quiets" in their songs; this will allow those high points to shine even brighter.