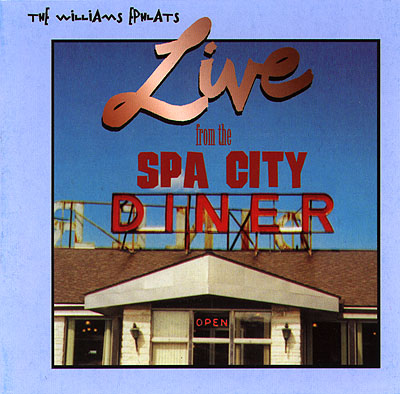 Golden throats and tin ears make up the signature Ephlats sound, as explored over 20 tracks on Live from the Spa-City Diner. Good solo voices, warm bass lines, nice menu of songs and arrangements — but I wanted to flee as soon as I got a whiff of what was coming out of the kitchen.

Being able to sing a song through without stopping may mean it's ready for your friends, or a casual gig at a coffee house or dorm commons. But that's no license to record. Most of these songs sound like a run-through, where pitch is a poor second to momentum. The frustrating thing is that all of these kids clearly can sing — so why can't they hear themselves sounding off in multiple keys?

Only five songs on this disc were in shape to record: What I Got, Would You Harbor Me, Why Should I Cry For You, Shelter and What I Am. Mostly clustered at the back end of the disc, which I certainly wouldn't have got around too if I hadn't been forced to listen to the whole thing. And that's the crying shame of it all - these songs show that this group is perfectly capable of singing as a group, listening to each other and maybe rehearsing, too.

For most everything else, the song remains the same: nice, even good solos (especially Sara Richland and Jane Knight) backed up by bad backgrounds, wrong chords and other wince-inducing paraphernalia. It's a shame to see so much talent come up short.

Go to any art museum and you're bound to see some student sitting on a bench trying to copy an old master. Learning to copy is a valuable learning tool. Before Picasso or Mondrian did their own thing, they first learned the key elements of classical figure drawing.

One would therefore hope that the Ephlats are learning something from their liberal use of prefabricated arrangements. "Don't Get Around Much Anymore" is taken from a Danny Lichtenfield Beelzebubs arrangement. (The Ephlats have to adapt it for a co-ed group and thus give it an extra kick of life in the process.) "What I Got" comes courtesy of Dan Jurow of Off the Beat fame. (The Ephlats get points for taking an instantly overdone song and making it a little more fresh by having a woman take the lead. Too bad that the tempo is a little lax.) Most notably, the album closes with Jeff Deason's inventive arrangement of Why Should I Cry For You (which features backing vocals so inventive that Mixed Company named their album after them).

Unfortunately, when the Ephlats try to make their own arrangements in a similar style, they still have a lot to learn. On Tupelo Honey they try the old arranger's trick of mixing in bits from another song. The results are disasterous. The simple arrangement and confident solo were going along fine when suddenly they throw in a few bars of "Mmm Bop". What?! The songs aren't thematically related, the tempos don't match, the moods don't match — why did they do it?

The Ephlats do a better job mixing bits of Lucy in the Sky with Diamonds into Dear Prudence. But the solid backing tracks are overwhelmed by an awkward and strained soloist. There are some GOOD soloist that might have sounded better in better company, but the all of the tentative, timid, and unassertive soloists tend to drag the whole album down with them. Those are the album's biggest problem in a nutshell — weak solos and fatal flaws in the arrangements (often in the form of a nasal guitar part like the one that wrecks All Through the Night).

If the Ephlats are looking for a good role model, they'd be wise to forget OTB and Mixed Company and skip directly to Artists in Resonance. AIR's straight forward, no frills style is the closest match for the Ephlats' approach. AIR just pulls it off more confidently. However, on a few songs like Find the River and Stephen's Last Night in Town, the Ephlats seem to be heading in the right direction.

(Fade in snooty French horn music.)
Good evening ladies and gentlemen, and welcome to another episode of "Typical College Album", sponsored this week by The Ephlats of Williams College.

The album we shall glance at tonight is entitled Live from the Spa City Diner. (Fade out snooty French horn music) It is a 20-song collection, with a carrying case decorated in a simple diner motif. The front of the case sporting a picture of a nondescript diner, which one might imagine finding strategically located near an interstate highway so that one can grab a distasteful bite to eat before promptly running from Williamstown, Massachusetts. The back is a diner menu with a listing of the songs to be performed.

But enough talk about that, lets get to the real meat of the album. What is it that makes this album such a Typical College Album? The first thing that would make one think that is the fact that there is 20 songs. The next thing that does it is that 19 of the 20 songs are mediocre. Only Grateful Dead fans (fondly referred to as Deadheads) can really sit through 19 or more mediocre songs at a sitting — and they usually have a little help from some narcotics. Another thing that distinguishes this album as a Typical College Album is the bland production quality. All of these things, along with lackluster energy throughout most of the album help us distinguish this album as a true Typical College Album.

Oh, another thing that makes this a Typical College Album is the overwhelming need for collegiate music arrangers to put an unrelated song into the arrangement of another at least once. On this album, that is done in a most bewilderingly masterful fashion in the song Tupelo Honey by Van Morrison. In the middle of this barely recognizable version of the classic tune, up pops the chorus to Mmm-Bop by the teen-pop sensation/musical nightmare that is Hanson. Why? I think it's in the contract every collegiate arranger has to sign before writing most anything.

Now I did say that there were 19 mediocre songs out of 20. That is true. The one song that does not qualify as mediocre is the song Would You Harbor Me by the amazing womens a cappella group Sweet Honey In The Rock. The reasons for this song standing out is the fact that the song is beautiful, and the arrangement does nothing to obscure the simple, haunting quality of the song or the thoughtfulness of the lyrics. While not perfect, the Ephlats do an admirable job with this song.

Well, that's all we have time for tonight. As a quick summary, Live from the Spa City Diner by the Williams College Ephlats is a true Typical College Album. If you purchase it, you can be assured that after listening to it once or twice it will occupy that most honored of spaces in your music collection: somewhere near the bottom of the dusty box filled with albums you don't listen to anymore.

(Fade in snooty French horn music.)
Thank you for joining us for this episode of "Typical College Album". Join us again next time as we reach in to the big, dusty box of collegiate music and find another hazy gem. Tah Tah!

YAY! The Ephlats let me use my favorite reviewers word...

This album is an exercise in unevenness...for every soloist that really nails a song, there's one that is almost there, but it's out of their range, or their timbre is wrong, or something else that distracts the song. For every song that is watertight, there are a couple others that push and pull like a warped record album. The one thing I did find consistent was the show-choirish quality of their jazz tracks...not one of their strong suits (especially with the soul-jazz of Take 6, which needs a bite that they lack).

Equally uneven were the songs. There were so many songs on this I wanted to give 5's to...but they were missing or lacking in one key element to push it over the top. One song has a killer arrangement but a less than top notch vocalist....the other has great energy but uneven tuning....

I think they could have been better served by cutting the track list to about fourteen songs and focusing more on filling the cracks. As it stands, there are four or five songs that the album could have done without, and certain areas (especially the opening to All Through the Night) could have used more rehearsal.

Don't get me wrong..this is by NO means a horrible album. But it's not a really good one either. To a cappella fans, I marginally don't recommend this album....for people new to it, they're a good, impressive group. I just think they've got a bit further to go.

The William's Ephlats have produced a workable album. They engage in an admirable complexity in their arrangements, a good variety of song types (which they approach with some equal variety of style), and scattered uses of percussion and textured syllables to keep things moving. Where the album falters in this reviewer's opinion is in its energy and coherency: while the group carries off some songs with aplomb, too often it fails to carry across a sense of the song. Surprisingly for a group dealing in covers, certain tracks simply do not fall into any groove related to the original song (I Still Haven't Found What I'm Looking For, Why Should I Cry For You are both in this mode). Covers by college groups should of course be made the group's own, but more importantly should be instantly recognizable.

Tuning is sometimes an issue, especially in the opening moments of solos. The group is to be applauded for spreading out the solos so widely; at the same time, it's clear that the quality has suffered as a result. Strong attempts across the board, but whereas other albums show that even American collegians can have soul, there is little to be found at Williams. Of course no one should be chided for singing something entirely unlike the original artist, but when combined with a strange sense of not really knowing even the original song the result is fairly average.

I enjoy the use of percussion (infrequent and lightly mixed), and could ask for more and on other tracks. As above, the complexity and texture of the arrangements are to be applauded, even if they sometimes run away from the singers (this is especially pronounced in the higher voices, whose attack on the nonsense syllables is not always spot-on).

On the whole, an ambitiously-intentioned album with fairly average results.

The Williams Ephlats
3190 Baxter Hall
Williams College
Williamstown, MA 01267
Or get it from Mainly A Cappella
×