Holiday A Cappella Music For Children (1999) 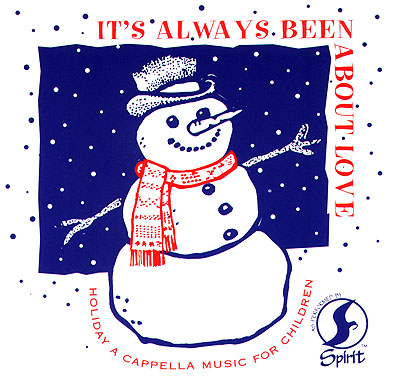 Spirit is a mixed singing group from Kansas, whose CDs are (apparently) intended for people to give as gifts and groups to use as fund raisers. With that in mind, RARB has been charged with reviewing their CDs, which are largely, if not entirely, a cappella.

It's Always Been About Love: Holiday A Cappella Music For Children is a 10-song CD of (mostly) Christmas songs that you've (mostly) heard before. Not entirely a cappella, the album opens with an accompanied 7-minute Fred Waring version of Twas the Night Before Christmas, and also includes accompanied versions of Sleigh Ride and Let There Be Peace On Earth (Let It Begin With Me).

Spirit has a clean sound — tuning and blend are generally pretty good. This only reinforces for me that what this album is is Christmas background music. There's nothing here that's offensive or hard to listen to, but considering that this is supposed to be music for children, and songs like Jingle Bells and Sleigh Ride are largely children's songs, I don't get much of a sense of fun, of liveliness, of much of anything that would actually draw children to this album. The exception are the last three songs, which include a children's choir which blends and contrasts well with the adult voices. While the children come in sounding a bit overly "proper" at the beginning of Angels Among Us, they add some nice variety and a festive element.

My husband (who was walking through the room as I was listening to this CD) hit the nail on the head when he succinctly described what he heard: it's not holiday a cappella music for children, it's holiday a cappella music for grandparents. It's not very exciting, largely because it doesn't feel like the singers are doing anything but following what's on the page. My favorite tracks on the album are the two Alfred Burt songs, Caroling, Caroling which is short (too short!) and lively, and Some Children See Him which, because it has a soloist through much of the song, offers a little more emotional impact than the more bland, group-oriented tracks.

If what you really, really want is background music for Christmas, you can find it on this album, but I can't recommend it generally to RARB's a cappella readership. The prices on the website seem a little steep, even if some of the proceeds (I think) go to children's charities, even if each CD does come with a snappy gift wrap/card. Your money can be better spent somewhere else, and you can donate what you save to the charity of your choice.

OK, how can one complain about a collection of Christmas music that sounds good and is well performed?! You really can't. That is really the case with this album by Spirit called It's Always Been About Love: Holiday A Cappella Music For Children. You have to be a grumpy old bastard who hates the holidays to complain.

Spirit is a mixed ensemble of adults that sing the same kind of SATB jazzy-shnazzy sort of songs that that extra-talented a cappella group used to sing when you were in high school. You know the one that was a subset of the big Concert Choir, or A Cappella Choir or whatever you called it. The thing is, these folks are much better than that group ever was. In fact, I imagine that these folks were in that high school group themselves and decided that they wanted to do that same stuff like it's really supposed to be sung. But it is the same stuff, with the same kind of sound. They even have the occasional piano accompaniment, just like high school!

But also like I said, they do it much better. Spirit is flawless in their technical execution, and their polished sound gleams like a pair of patent leather shoes. They have had some 15 to 25 years to perfect their sound. Each song is well done and you would have to be listening mighty hard to complain about much of anything.

It's Christmas music. Just turn it on in the background and let the party go. Your young kids will like it, grandma and grandpa will like it, heck, even the dog might like it. Just don't play this stuff for your sardonic teenager who thinks hip-hop is the only form of musical entertainment meant to thump their eardrums. They will hate you for it.

So there you have it. Do you need some flawless a cappella versions of CLASSIC Christmas music? Yo, Spirit has got it goin' on.

There's a slight chance that I'm just not in the Christmas mood as I review this CD in the heat of August with no air conditioning. But there's more to it than that...

For a 10-person group, Spirit rarely if ever uses more than 4-part harmony, which was a little disappointing. Night Before Christmas is the only original arrangement on this album, and though the liner notes claim it "will quickly become a cherished favorite", I'd have to disagree. To me it alternated between stilted and campy, neither of which are favorites of mine. The rest of the arrangements featured here are relatively standard, except maybe Rudolph, which is a nice segue to this next point:

This album is subtitled "Holiday a cappella music for children". There are a few non-a cappella tracks here, but the bigger issue to me is that this doesn't seem at all like a children's album. It might be an OK selection for background music to trim that Christmas tree by, but the songs aren't fun enough for kids to enjoy, I'd think. Too churchy, too choral, too reserved. Some Children See Him, for example, is a pretty song with a nice soloist, but I suspect it will go over significantly better with us old folks than the little tykes. There are children singing on a couple tracks (and not mentioned anywhere in the credits), so maybe it'd be better subtitled "Mostly a cappella holiday music with children".

This is a harmless CD — it's not bad, it's simply nothing special. Not a great feature in a Christmas album, in my mind. Or a children's album, for that matter.

The songs that are a cappella are kept simple, with satin-smooth blending and crisp harmonic progressions. Yet this album is "a cappella music for children" and they sound completely uninterested in what they're singing! I don't think children will want to listen to this, although they are "children's Christmas songs".

Songs like Sleigh Ride with a piano, bells, horse-clopping and "oohs" smattered everywhere sound like EVERY OTHER version of this song done by a choir of voices and instruments. Caroling, Caroling is so sugar sweet, children will be giving back their candy and sweets after hearing this one. Angels Among Us is a pretty, soothing song, but it also sums up the "happy, love-everyone" Christmas feeling that starts the day after Thanksgiving.

The recording quality is again mundane, with the overall sound being like a performance in a small church in, say, Wichita, Kansas? (Where Spirit hails from...) Adding the children to several tracks rounds out the picture perfectly; the local community gathers every year to hear the Christmas songs, they buy the "local celebrities' CDs", and the CD stays popular in HOME territory.

For Spirit to challenge their obviously trained voices, they should delve into more difficult arrangements, apply the word "a cappella" to more of their pieces, and remember that Christmas albums are perhaps the most overdone genre of specialty music out there. I was glad to see a mostly a cappella album, but when all of these Christmas songs start to sound the same with different Christmas images thrown in, one loses interest very quickly. It is obvious that a lot of effort went into this album, and the members of Spirit all have wonderfully crafted voices that are pleasant, professional, and clear.

To all artists, my suggestion is this: if you are going to do a Christmas album, make it unique. Make it captivating. While this album may be a local/regional success because of a familiarity of the group, there is no reason for this reviewer to encourage the purchase of this album. Save your Christmas cash for something else.

Billed as an album of "holiday music for children", this disc delivers. The album embraces a mostly secular selection of songs, mostly well-known and sure to find favor with the kids. Some lesser-known songs and more overtly religious tracks round out the ensemble. (Incidentally, not all of the tracks are a cappella; there is some piano accompaniment.)

Throughout the album, Spirit performs with grace and aplomb. An obviously well-seasoned, highly professional group, Spirit shows a strong mastery of their material (including luscious blend, impeccable rhythm and tastefully rendered solos); to this is added what must make any album stand out from its peers: enjoyment. At least to this reviewer's ears, Spirit ardently and lovingly engages each of its songs. One could not come closer to the "spirit" of Christmas music without carolers in the living room.

Some minor points: the album might more accurately have been called a selection of "Christmas" songs; while this reviewer feels no personal push for PC, from a simple matter of marketing such a change might have made the album's content more clear. The blend is normally superb; occasionally there are some problems in vowel-matching in the higher voices. In some songs, tempo changes are very well employed to inject life into some possibly overly rehashed "favorites"; again, normally nicely done, and Rudolph might even have benefited from more. Superb blend and practiced ease singing as a group may have caused the energy on some songs to fade away at the edges; while clear enjoyment is present, some songs seem to demand more varied musicality than evidenced (Winter Wonderland, for example, might enjoy more swing, etc.).

The reason this album scores only average (3) on its "repeat listenability" is its highly seasonal nature: from a personal standpoint, it is only around Christmas that I would play any music of this sort. When that season rolls around, however, this is very likely one of the albums I would reach for.