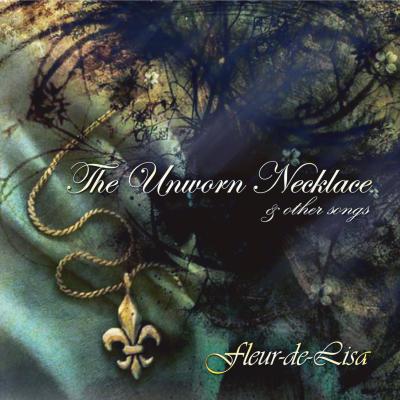 I was really excited to receive Fleur-de-Lisa's recording The Unworn Necklace for review. I had the pleasure of seeing these Durham, NC-based ladies perform at the Eno River Universalist Unitarian Fellowship several years ago. They were mesmerizing during the service and I had hoped that experience could be rendered or repeated listening to their album.

For the most part it is. The album is extremely well thought-out and planned. The story arc travels on a journey through time and season as wrapped in a velvet cloak of relationship matters. The misstep is the need for more substantial music for some of the heavier topics. There seems to be missing weight that would have made several of the songs that much better. And as such, after a while, the disc becomes repetitive sounding. And one gets bored. Very bored.

This is a shame because the haiku is probably my favorite style of poem. There is something captivating and liberating about having to express a nugget of nature and emotion in seventeen syllables. You have to get to the essence of the feeling quickly, with no room for fluff or unnecessary words. Setting that type of poetry in song is a Herculean task. Lyrical phrases are short, choruses are almost non-existent, simplicity is key. A writer has to go for the gold right off the bat. Musical motifs have to be tied to the subject matter intrinsically — engaging the listener immediately and succinctly.

Sarah Shunk and Sylvia Freeman give a hearty attempt at rising to this challenge. As members of the female-folk quartet Fleur-de-Lisa, they've composed a sweeping song cycle regarding life, love, and death from the works of several noted poets. Included on their album are Chine, Kagai, Richard Krawiee, Rumi, Jaki Shelton Green, Roberta Berry, and former NC poet laureate Kathryn Stripling Byers among others.

The significant problem with the disc is the execution of the songs. Tuning and intonation border on grating in several of the pieces. Most notably and unfortunately is the Harmony Sweeps-winning Rainy Season and the majority of the relationship songs. Blending ability differs from song to song. Sometimes the chords lock and the result is a gorgeous sound. But then, a lack of support or weird phrasing makes it impossible for songs to literally end on a good note. And forget about balance; it seems like whoever is singing second soprano has decided that it is the most important part no matter the song or lyrical phrase. The recording technique doesn't offer them any assistance in correcting the situation. When they take a more Sweet Honey In The Rock approach to their songs like Slowly or a strictly classical strain like Slicing, the sound is glorious.

I'm glad members of Fleur-de-Lisa are writing their own songs, especially in such a niche style. It suits them very well. But at only 32 minutes of music, the disc seems overlong because of the musicality problems. The group should work on continuing to hone their sound so that blending moments actually blend, and their producers should take care of balancing the voices during the various tracks.

If you are a poetry enthusiast or enjoy four-part female harmony with some light percussion (and the occasional real percussive instrument), please pick up The Unworn Necklace. Otherwise, wait for the next recording, which will hopefully live up to my memory of them live.

With The Unworn Necklace, the four ladies of Fleur-de-Lisa have an interesting concept: three song cycles ruminating respectively on seasons and relationships, beginning in spring, ending in winter. These cycles pan out in short bursts of music (most of the tunes are barely over the minute mark), arranged pretty strictly for four voices and utilizing a wide array of musical styles to tell the story. Digging the concept? If so, read on!

I have to respect the idea behind this album, if for no other reason than it is a truly expressive, personal look at the way these women view the world. The majority of albums I get for review are invariably ten-fourteen pop/rock tracks that were radio hits sometime within the last sixty years. These songs almost never have anything to do with one another, and were made for the sole purpose of commemorating the brief existence of one specific gathering of singers. There is great joy to be found in this approach (indeed I have made several such albums myself!), but when I get an album as clear in its message and as frank in its delivery as this one, I have to pause to respect what I'm hearing.

That said let's discuss execution. It's good, but not great. This is a case of brutally honest live-in-studio studio sound, so when these ladies are on, they're on. When the pitch isn't quite there, it's pretty obvious, and it's hard to overlook. How often does pitch creep in as a distracting factor? I'd say about 30% of the time (not particularly better or worse on specific tracks — it's a moment by moment thing). For the better part of that 30%, the issue has as much to do with blend as with pitch. A single voice (usually lower or mid-register) will stick out just a tad under pitch, upsetting the delicate balance of the four-part treble chord.

The arrangements, again limited to four voices, tend to be more rhythmically than harmonically interesting. This isn't necessarily a bad thing. The oft-used technique here of a single voice rising from a previous block texture works well, as it allows the listener to get familiar with the character of each woman's voice. Also, speaking of rhythm, I was pleasantly surprised by many of the instances of percussion used on this album; some vocal, some body, some instrumental, all appropriate and well-mixed.

So what's the takeaway here? For what it is trying to be, The Unworn Necklace is pretty successful. The approach to the arrangement and delivery of each song feels very intentional and well considered. Though some of the mechanics fall short, preventing uninterrupted enjoyment of the material.

I would be curious what this group might put together were they to take more full advantage of the limitlessness inherent to the studio, but I also suspect that such experimentation is not their priority. If the concept of this album sounds interesting to you, give it a listen and enjoy the artistry. As ruminations on life and love go, it's pretty honest and original, and I have to give my respect for that. As a contemporary a cappella album, it leaves a bit to be desired.

The North Carolina all-female quartet Fleur-de-Lisa's second album The Unworn Necklace includes a total of twenty original songs and clocks in at just over 32 minutes. It's easy to do the math: these songs are all bite-sized (there's a reason the group's web site address is haikusongs.com), with the longest coming in just shy of three minutes and the shortest, Slicing, at 38 seconds.

Therein lies the quartet's aesthetic: these songs are all brief poems set to music by two of the group's members. It's almost fitting that half of the songs on The Unworn Necklace are grouped by seasons (tracks one-five are classified as "Spring/Summer" while sixteen-twenty are "Autumn/Winter"), since the brevity of these songs makes them as fleeting as our favorite times of year.

The group's very clear aesthetic, though, can also be its limitation: most of these songs are so short that a listener can barely settle in to its mood before the group shifts to its next song. Even the longest tracks — Wild Rose and Unworn Necklace — are finished in a blink. Still, these four singers create a lovely and consistent atmosphere, song after song: Fireflies evokes the fluttering of lightning bugs on a summer evening; Me and A Frog is full of whimsy; the mini-round of She Reads Her Letter is romantically suggestive; and the layered vocals on Unworn Necklace give the song a trance-like feel. At no point does the album feel limited by having only four singers (in fact, the group even throws in some vocal percussion on a few tracks without the vocals sounding thin), although there are a few too many moments where the vocals sound slightly off-pitch.

Fleur-de-Lisa might have limited appeal even within the vocal community, especially for those well-immersed in the collegiate style of pop/rock covers. Still, this quartet has a unique, simple spin on vocal originals, which is refreshing in a sea of similar-sounding groups.