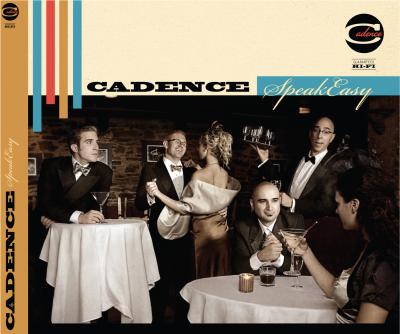 I'm an unabashed, huge fan of Cadence, having absolutely loved their first two CDs, Frost-Free and Twenty For One where the group did a little bit of everything and did it oh so brilliantly. But not unlike when m-PACT went all jazzy on me, discovering that these fantastically talented gents have somewhat abandoned the funk and have veered sharply back to their York University Wibijazz'n roots (even though most of the current group never sang with said collegiate group) is a bit of a mixed blessing.

The blessing, it should be noted, is an abundant one. Virtually everything on this CD is intricately and interestingly harmonized, with fantastic color chords, meter variations, instrumental imitation, vocal percussion, and blend that would be the envy of even the best pro groups working today. Insofar as vocal jazz a cappella is concerned, it rarely gets better than this, and the group has been justly rewarded for its efforts with three CARAs (Best Jazz Album, Best Canadian Album, Best Jazz Song for On the Street Where You Live), as well as songwriting awards for Aaron Jensen, who contributes two wholly original songs and provides music for a third.

The mixed blessing then is that on a jazz album, Cadence occasionally gets into a bit of a rut of sameness. There's certainly an effort made to try out various shades from swingin' jazz to moodier jazz to music reinterpreted through the prism of jazz. But somehow, most tracks still settle down into a feel that is on the mellower side of mid-tempo. Song structures are generally handled much like an instrumental jazz combo might. This is faithful to the style of music but puts incredible pressure on the arrangements to be ceaselessly inventive, and they are just not always up to the task. Nifty chord substitutions abound, but there a few too many similar group scats, a few too many horn solos, and overall, I just miss the playfulness — in background words, song interpolations, abrupt stylistic changes — that compositional "wink" that typified Cadence's prior efforts and said to the listener: "you may think you know this song but pay attention and you'll see how much fun we're going to have with it."

I'm nitpicking, of course, but that's what you do when a group this good, that you enjoy this much, falls even a hair's breadth short of what you'd hoped. It's a kick-ass CD, no question about it. It may not get the same airplay with me as Cadence or Frost-Free but then again, few things do.

Cadence really raises the bar for jazz groups with its latest release, Speak Easy. With smooth and easy production from top to bottom, the fine gentlemen of Cadence guide listeners through a 45-minute jazz journey. While they stick to an "old-school" concept of the genre, they do it masterfully well.

While the ever-popular concept of taking jazz theories and influences and applying them to more contemporary music is on the rise (we see this in groups such as Sonos), Cadence took an old-school stance on it, reminding us that classic jazz can stand on its own and is more than just an influence (in case you forgot).

Speak Easy is riddled with vocal trumpets, scatting, some excellent vp cymbal brushes, and even ... a tap solo?? But do not take this album at just that. Cadence brings the fun, up-tempo, dancy jazz and merges it with the feelings of jazz when it first originated, reminding the listener of the Ragtime of the 1910s and the swing of the '20s and '30s. The album is nothing if not intelligent. Classic jazz meets excellent voices backed with stellar production.

My favorite song on is Harvest Moon. Soloist Ross Lynde lures the listener in with his haunting tone. With backing vocals joining quickly after the intro, Cadence presents us with what is likely the simplest arrangement on the entire album. The story that Lynde weaves for us with the lyric is captivating. He connects with the words he's singing in such a way that makes him incredibly vulnerable to the listener, which I find rare in recorded a cappella. Perhaps the best part of this track, if not Lynde himself, is the dramatically better take Cadence gives this song than the original. Steering far from Neil Young's version, they offer a view of the song that makes Lynde able to connect with the listener so much — an arrangement that lends itself to individual creativity, a cohesive vision of the message of the lyric, and effortless perfect execution on the production side (at least, that's the way it sounds to me).

While Speak Easy is mind-blowingly awesome for the most part, Cadence certainly made mistakes along the way. This album is over-qualified for the "Good" category, but I hesitate to say it belongs in the "Excellent" group. After one or two not-as-awesome-as-others song choices and a few well-executed average versions of classic songs, I can't say Speak Easy was perfect. For the other 75% of the album, it's worth every penny.

Despite the old-timey vibe evinced by its cover, Speak Easy is not your father's vocal jazz. From the first note of the first track, the men of Cadence give us something completely and definitively different. You may recognize some of these titles, but you've never heard them quite like this.

All the arrangements are great, but Aaron Jensen's On the Street Where You Live rises to another level entirely. It starts brilliantly with an orchestra tuning up and coalescing into the first few chords of an MGM-movie-musical overture, then slides into a deceptively slow and smoky first verse, and finally settles into its fun, up-tempo groove. It captures the brassy Broadway sound, yet it sounds nothing like the original Broadway version. Jensen does equally well with classic rock: in his hands Harvest Moon becomes a slow, rich tapestry of harmonic movement that Neil Young could never have imagined. Kurt Sampson gives us an elegant deconstruction of Both Sides Now, stripping it to the bone in places and adding flourishes in others. He brings Joni Mitchell's poignant poetry to the fore, and you suddenly sit up and hear the song anew. Finally, Ross Lynde's slow yet breezy take on Still Crazy After All These Years lets us know that the party is winding down and it's time to go home.

Jensen's originals are also great, and they mostly slide in seamlessly alongside the classics. Good Love is the moody, bluesy male counterpart to Peggy Lee's Fever, and High and Drysville conjures up images of Sinatra doing Mack the Knife. Both songs could easily be lesser-known standards. The odd man out is The Tramps, which seems to be Cadence's answer to the Alma Maters that so often appear on all-male collegiate records. Though extremely well sung and gorgeous in and of itself, it is at its core a drinking song dressed up in formal wear, and it doesn't quite fit with the rest of the album.

As befits the album's ambiance, the guys mostly stay cool and casual on the solo mike. They are not strong lead singers, but they more than make up for it with their energy, confidence, and dead-on tuning. But they are perhaps at their best when they aren't singing words at all: nearly every song features a vocal trombone, trumpet or harmonica in some capacity. While this trick gets tiresome about halfway through the set list, it is a damn good trick, with Jensen's trumpet solo on Good Love as a particular standout.

In terms of production, Cadence has opted for a refreshingly clean sound that never lets you forget you're listening to voices. Those vocal horns have received some help in post, but not much. The motley crew of engineers and mixers has done just enough to trick you into thinking that Cadence has more than four men in the group, and only On the Street Where You Live exhibits any significant use of studio effects. Engineers Art Mullin and Dylan Bell also contribute stunning guest perc on High and Drysville and Harvest Moon, respectively.

Like a good martini, Speak Easy is a classy concoction to be sipped and savored as it knocks you down and leaves you wanting more. It is a worthy addition to any vocal jazz collection — even your father's.