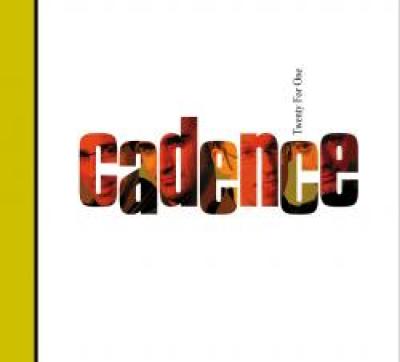 Cadence solidifies their bragging rights as Canada's premiere jazz-pop group with their latest release, Twenty For One. They seamlessly mix genres from jump swing (Hit That Jive Jack) to seventies pop (The Things We Do For Love) to eighties pop (Don't Fix What's Broken) and many genres in between. This kind of variety, usually the downfall of jack-of-all-trades-master-of-none a cappella groups, works for Cadence because, applied to each arrangement, unifying the CD, is a clear signature sound that is grounded in an absolute mastery of pop-informed jazz. Cadence aims high and hits the mark.

There are so many areas worthy of praise, but anyone seeking to master bass singing would do well to put Twenty For One on continuous play. Kevin Fox (with some able "pinch bassing" by Carl Berger) sets the bar for low "high" with their incredibly sensitive feel, giant leaps and non-stop energy. The basses of Cadence know how to drive the songs, yet manage never to steal focus from leads or sonority from intricate chords. This is no easy task when you're gifted with powerful natural instruments and ably backed by a full warm production.

This praise for Cadence's universally soft touch shouldn't give readers the wrong idea; this CD is possessed of a relentless whirlwind energy. Most of these tunes are feel good songs with great beats. Yes, the arrangers in your group will go wild over the chords, but their non-musical girl/boyfriends will also tap their feet to nearly all of Twenty.

Of course none of this would carry the day if the leads and production didn't deliver. Thankfully, the leads demonstrate the artistic touch of a master painter and the casual dexterity of an Olympic gymnast and the production is as smooth as a pimp on pay day, with considerably more taste.

Cadence is genius arranging brought to life by impeccable singing. Put another way, brilliant chords by graceful cords. This release is a must-own.

Expecting Cadence to top their debut CD Frost-Free was probably unfair of me but the brilliance of their maiden voyage, and the years I've eagerly waited a sophomore effort, made it virtually impossible for me not to feel at least a tad disappointed with Twenty For One.

Mind you, everything you'd expect from Cadence is present in ample and fantastic supply — tight harmonies, complex chords, inventive rhythms, solid scatting, soaring solos and sizzling vocal percussion. And judging this album in the context of a cappella at large, as we at RARB are charged with doing, I would have a very difficult time understanding a grade of less than "5" or "Excellent" for virtually every aspect of this album. There are only a handful of other groups that can bring the skill, artistry, energy and appeal that Cadence does and ths CD simply confirms that their status as one of the premier pop-jazz a cappella ensembles working today is undeniable.

But with the anticipation (read: peril) of near-perfection comes a tendency toward nit-pickiness on my part. After all, if the guys are THAT good, I feel all the more justified in calling them on the little things. So with that in mind, a couple of beefs:

But on a scale from 1-10 of how much they will inhibit your enjoyment of this CD, the above issues rate about a 0.5 — cumulatively. I feel a little like I'm telling da Vinci that the Mona Lisa should smile more. This album too remains a masterpiece and far more affordable one at that.

It's been five years since the release of Cadence's debut album, Frost-Free, and yet amazingly with the literally thousands of a cappella tracks I have accumulated since then, nine of the 12 tracks from the Canadian a cappella quartet's first album have remained in my iTunes playlist. So I was a little nervous to receive the group's follow-up album, Twenty For One, because it raised the question of what the group could do after such a smashing debut.

Well my friends, fear not. Cadence has done it again! Twenty For One is phenomenal. The cover song selection, the solos, the arrangement, the harmonies, the sound production, the original tracks... it's all top notch.

Everything Cadence does is laced with their sound whether it's pop, oldies, ballads, love songs or jazz. It doesn't matter if it's Cake, Paul Simon, Joni Mitchell or their own Dylan Bell, Cadence aces every kind of music. Bell is an arranging genius. He really knows how to get the most out of his band-mates.

While Bell is the group's lead arranger, the rest of the members are no slouches. Check out the part in Cake's Perhaps, Perhaps, Perhaps when Ross Lynde's and producer/engineer/mixer Adam Messinger's arrangement shifts into Can't Take My Eyes Off Of You. The transition is absolute brilliance; it's Cadence at its finest.

In the first four songs, each member of the group has his own solo, including the group's bass, Kevin Fox. But the ridiculous thing about it is that they are all so smooth and in sync with each other, and the music is just so damn good, that the listener is unaware of the switcheroo they just pulled.

And, for all you readers out there who give extra props for original music, you'll be pleased to find out that Cadence upped the originals quotient on their newest album. While Frost-Free had only one original, Twenty For One has four, and they're all wonderful.

The best original track, and possibly the best song on the album, is Bell's Don't Fix What's Broken. If Bell had written this song for a well-known artist with instruments, it could land on today's Billboard charts. I thought for sure it was a cover song until I looked in the liner notes. Broken has a great groove and a catchy melody. Pure pop, yes, but good, guilt-free pop.

I'm going to go out on a limb here: Twenty For One is the best professional pop/rock a cappella album of 2005. Don't even think about it... you absolutely must buy this album.

To order this album visit CD Baby or A-Cappella.com.